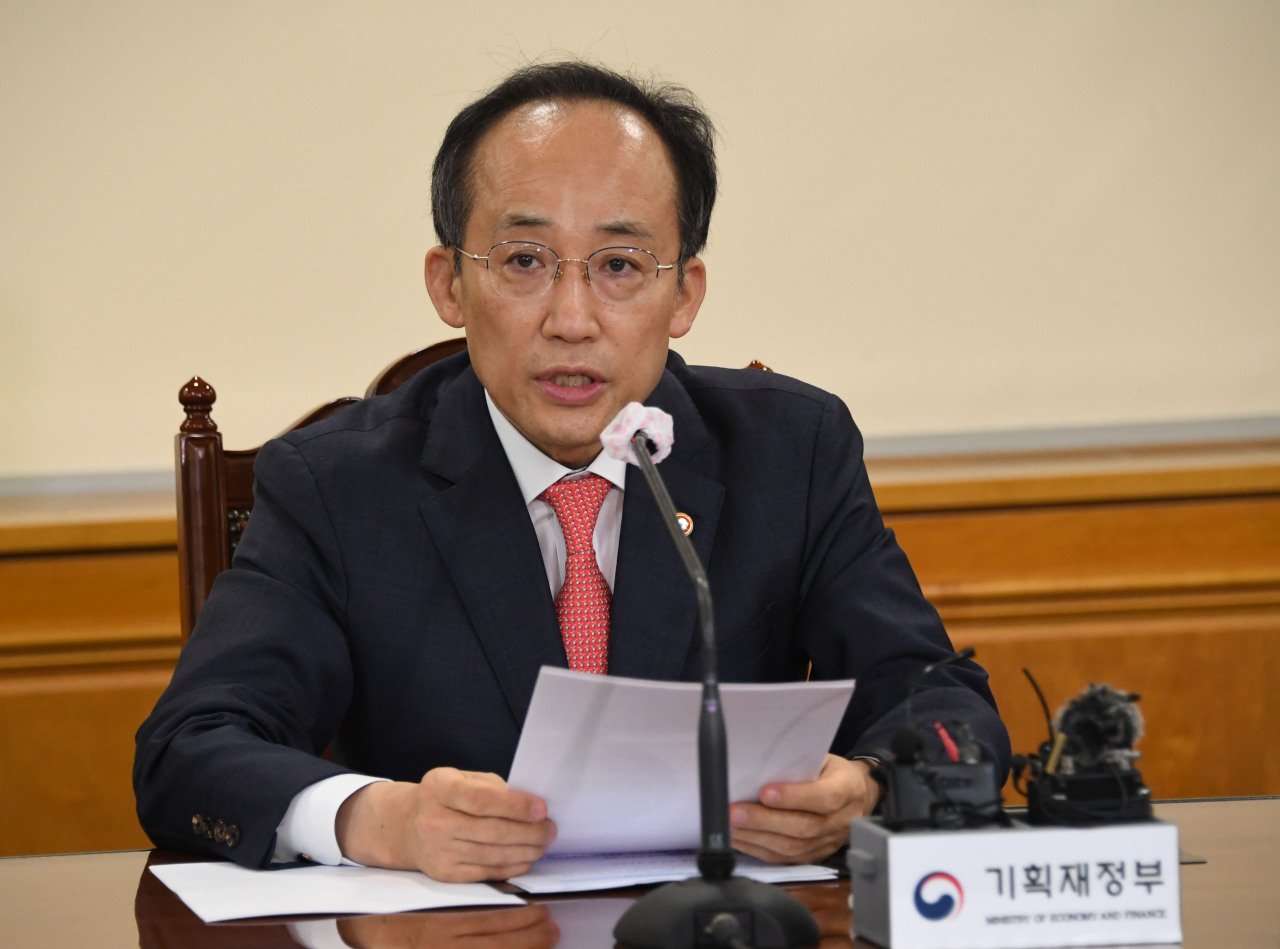 Finance Minister Choo Kyung-ho at a Monday meeting on the economy. (Ministry of Economy and Finance)
Increasing volatility prompted by changes in the global economy is gripping South Korea’s financial markets, but the economic fundamentals remain strong, Finance Minister Choo Kyung-ho said Monday morning at a meeting of the nation’s economic chiefs.

“The won is weakening, but economic indicators like the credit default swap premium are solid,” Choo said, referring to derivative contracts meant to protect investors from a Korean default. The premium on the country's five-year global sovereign bonds has been steadily falling since July 6, when it shot up to 56 basis points.

Choo noted that he will closely work with the four participants at the meeting -- President Yoon Suk-yeol’s economic aide and the chiefs from the central bank, top financial policymaker and financial watchdog -- in handing expanding volatility, saying responses to it will be “swift.”

The government, Choo added, will take stern measures to curtail speculative trading seen as worsening depreciation of the won. Hours after his remarks, the local currency tumbled to a 13-year intraday low at 1375 won per US dollar in onshore market before closing at 1371.4, 8.8 won weaker than the Friday’s close at 1362.6.

A red flag for the economy, the psychological threshold of 1,300 won per dollar was last breached in 2009 in the wake of the global financial crisis before being recently crossed in June. Meanwhile, the US dollar index, which measures the greenback against a basket of six major currencies, has soared to a 20-year high on persistent demand for the safe-haven asset amid recession fears.

Asked whether the won’s recent depreciation was unusual, before the currency slipped anew in the afternoon, Bank of Korea Gov. Rhee Chang-yong essentially reiterated his earlier assessment, saying that measuring depreciation depends on data to compare.

Rhee has previously said Korea is well positioned to ride out any fallout from the rallying dollar like higher import bills for fuel and food with its currency reserves, describing a currency crisis as not an option. Nor was a repeat of either the 1990s Asian financial crisis or 2008 global financial crisis, according to the top banker.

But the latest bank data on foreign currency bank deposits is fueling concerns, because total deposits edged down $2.18 billion to $436.4 billion at the end of August from July. Since March, except for July, dollar deposits had declined. But the dip in the reserves -- at times sold to boost the won’s value -- is not worrisome, the bank maintains.

Analysts say the won depreciation will likely stay for the time being. “The won will regain value somewhere between October and December, the fourth quarter, before returning its previous level below the 1,300 mark by year-end,” said Jeong Yong-teak, chief economist at IBK Securities.

That is because this month represents an “inflection point,” according to Jeong, who said the September 20-21 meeting the US Federal Reserve holds is potentially the last round of an outsized rate hike of either 50 or 75 basis points to tame inflation. US consumer prices did not rise in July after recording the largest annual increase of 9.1 percent in June in more than four decades.

The weakening won is currently complicating economic woes facing Asia’s fourth-largest economy, which is fighting not only persistent inflation but also a slowdown in export growth because of higher import bills. The August trade deficit reached an all-time monthly high since 1956, though the trade-reliant economy is still seeing a current account surplus.

“That could also change so we’ll more closely track relevant data.” Choo said at Monday’s meeting, launched in mid-June to show the public the government is serious about making the economy better. Tools will be available to help companies with their exports, Choo added.

Last week, the Trade Ministry said it would double down on easing rules and expanding loans for companies to sell more goods overseas, noting the prime minister will start holding a meeting in October to set the new plan in motion.