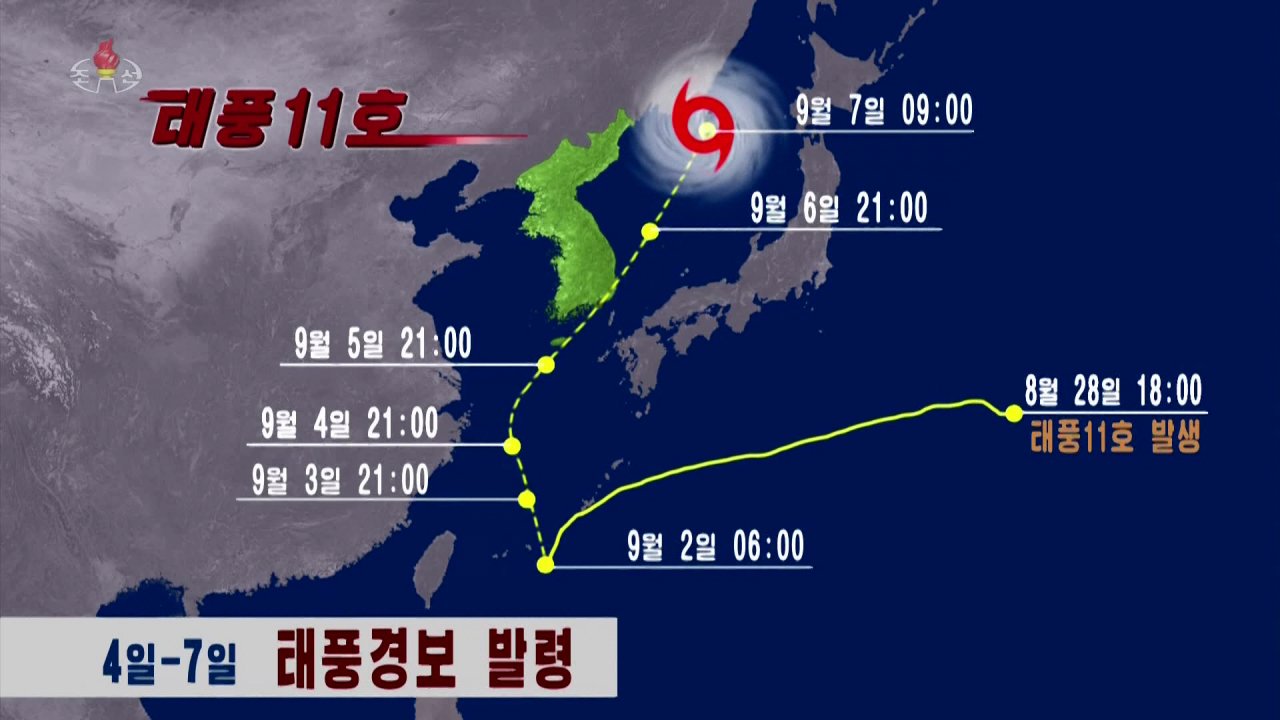 North Korea is taking precautionary measures as it braces for a "super strong" typhoon churning toward the Korean Peninsula, according to its state media Monday.

North Korean officials have inspected buildings at risk of flooding or collapsing while fishing boats out in the sea were recalled to port as Typhoon Hinnamnor is expected to bring heavy rains, the Korean Central News Agency (KCNA) reported.

Pyongyang has taken measures to prevent damage in areas frequently hit by mudslides and inspected the transportation infrastructure, including railways and buses.

The Rodong Sinmun, the North's main newspaper, also said the country has come up with strict measures to prevent the spread and "inflow of malicious virus" through typhoons and tsunamis.

The paper then ramped up calls for efforts to avoid flood damage in major farming areas, which could aggravate the country's already serious food shortages.

A heavy rain advisory was issued for regions in the eastern Gangwon Province, the border city of Kaesong and the southern areas of Hwanghae Province as up to 100-150 millimeters of rainfall is expected to pound the regions, according to the Korean Central Broadcasting Station.

Typhoon Hinnamnor, the 11th this year, is forecast to reach waters off Jeju Island in South Korea this week as a "very strong" typhoon. Typhoons are classified into four categories: medium, strong, very strong and super strong.

On Wednesday, North Korea is scheduled to convene a meeting of the Supreme People's Assembly (SPA) to discuss an organizational reshuffle, as well as the issue of adopting laws on "socialist rural development," among others.

The North has often used such an event to deliver both direct and veiled messages to Seoul and Washington.

The SPA is the highest organ of power under the North's constitution, but it rubber-stamps decisions by the ruling party. It usually holds a plenary session in March or April to deal mainly with the budget and cabinet reshuffles.

Pyongyang also marks the 74th anniversary of the country's foundation Friday. Last year, it celebrated the anniversary with a military parade with leader Kim Jong-un in attendance, though no new strategic weapons were displayed.

Concerns have grown that the North may soon engage in provocative acts, such as a nuclear test or missile launch.

Last week, South Korea and the United States wrapped up the Ulchi Freedom Shield exercise, a major combined military exercise, which Pyongyang regards as a rehearsal for war against the reclusive regime.

North Korea has recently poured out harsh rhetoric against the South threatening to annihilate the country with force.

In July, leader Kim warned that South Korea's Yoon Suk-yeol government and its "military gangsters" will be wiped out in case of a preemptive strike, followed by another warning from his powerful sister, Yo-jong, threatening retaliation against Seoul for bringing the coronavirus into the North. (Yonhap)