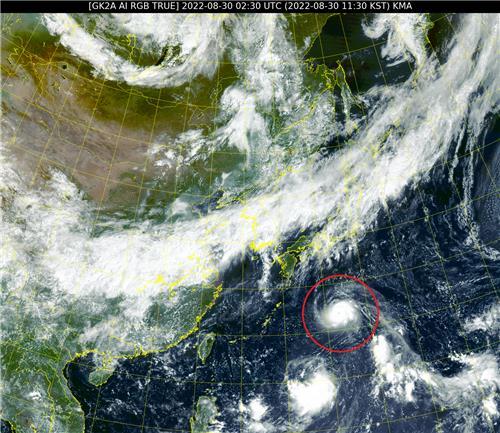 A satellite image of typhoon Hinnamnor on Tuesday. (Yonhap)

Typhoon Hinnamnor has grown into the strongest level typhoon, and is expected to pass by Jeju Island by early next week.

According to the Korea Meteorological Administration, Hinnamnor will reach 470 km south-southwest of the city of Seogwipo, Jeju, on Monday and be 180 km east-northeast of Seogwipo at 9 a.m. on Tuesday.

Most of the route prediction models expect Hinnamnor to pass through the Korea Straits between South Korea and Japan, but some predict that it will strike South Jeolla Province or pass through Japan.

The Japan Meteorological Agency and US Joint Typhoon Warning Center expect Hinnamnor to reach Jeju Island on Tuesday and Monday, respectively. Japan is already in the direct influence boundary of the typhoon. Japanese local media reported strong winds of 92 km per hour in Nanjo, Okinawa, along with a possible flood damage warning on Wednesday.

This typhoon has a similar scale and route with the famous typhoon Maemi, which caused severe damage on the Korean Peninsula 19 years ago. Typhoon Maemi, which struck the country in September 2003, caused 117 deaths, 13 people to go missing, and property damage worth 4,223 trillion won ($3.1 trillion)

Weather analyst Woo Jin-kyu from the country’s weather agency appeared on YTN radio Wednesday and said that Hinnamnor is expected to be even stronger than Maemi, as it is expected to arrive with an atmospheric pressure low of 940 hPa, while Maemi recorded an atmospheric pressure low of 950 hPa when it reached the peninsula. He urged that preparations must be made quickly.

Due to the influence of typhoon, the weather agency warned the possible wind gusts, thunder and lightning, and rain of 30 mm per hour around Jeju and the southern coast regions. The accumulated forecast for precipitation until Saturday is 100 to 200 mm in Jeju, 50 to 100 mm in South Jeolla and coast region of South Gyeongsang province, 10 to 60 mm in inland areas of South Gyeongsang province, and 5 to 30 mm in Gangwon, northern North Gyeongsang and North Jeolla provinces.

Hinnamnor is a name submitted by Laos, one of the 14 members of the Typhoon Committee, which names for tropical cyclones and typhoons. The name refers to a national protected area in the country.