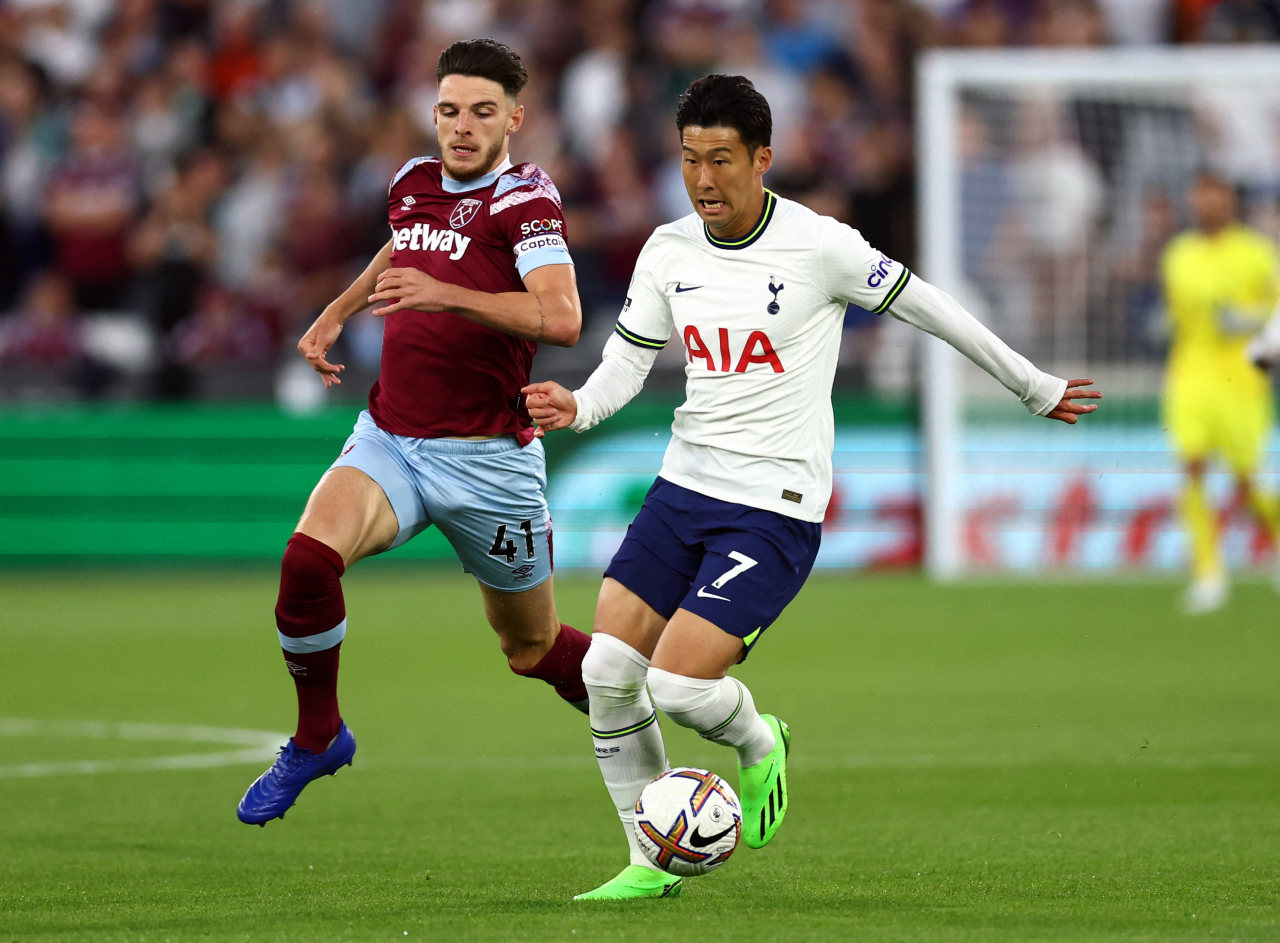 In this Reuters photo, Son Heung-min of Tottenham Hotspur (R) battles Declan Rice of West Ham United for the ball during the clubs' Premier League match at London Stadium in London on Wednesday. (Reuters)

A handful of matches into his Golden Boot defense, Son Heung-min is still in search of his first goal.

In yet another uninspiring performance, the South Korean star for Tottenham Hotspur did not score in the club's 1-1 draw with West Ham United at London Stadium in London on Wednesday (local time).

Spurs stretched their undefeated run from the start of the season with three wins and two draws. But Son, who tied Mohamed Salah of Liverpool for the Premier League lead last season with 23 goals, did not even register a shot on target despite playing the full match for the first time since the season opener against Southampton.

Son made his fifth consecutive start, joined up front by Harry Kane and Dejan Kulusevski.

The trio nearly connected for a goal in the 34th minute, when Kane, after taking a pass from Kulusevski, sent a cross intended for Son. West Ham defender Thilo Kehrer, however, ended up putting the ball into his own net for the game's first goal.

Spurs conceded the equalizer to Tomas Soucek in the 55th minute, and Son and the rest of his team were held in check.

Son's first shot attempt of the match came in the 73rd minute, though it went off an opposing defender and out of play.

Richarlison, a key summer signing for Spurs who had replaced Son in recent matches, was subbed in for Kulusevski this time in the 76th, but the Brazilian did not affect the outcome of the game.

During the 2021-2022 season, Son did not have a scoreless drought of longer than four matches.

With Son having been neutralized, a new face in the Premier League has jumped out to the scoring lead. Erling Haaland of Manchester City is tops with an incredible nine goals in five matches, following his second consecutive hat trick in a 6-0 rout of Nottingham Forest.

Elsewhere in the Premier League, Wolverhampton Wanderers' Hwang Hee-chan did not play in the club's scoreless draw against AFC Bournemouth.

Now in his second season in England, Hwang had been linked to another Premier League club, Leeds United, but reports claimed Wednesday that Wolves had rejected Leeds' offer because of concerns about the payment structure.