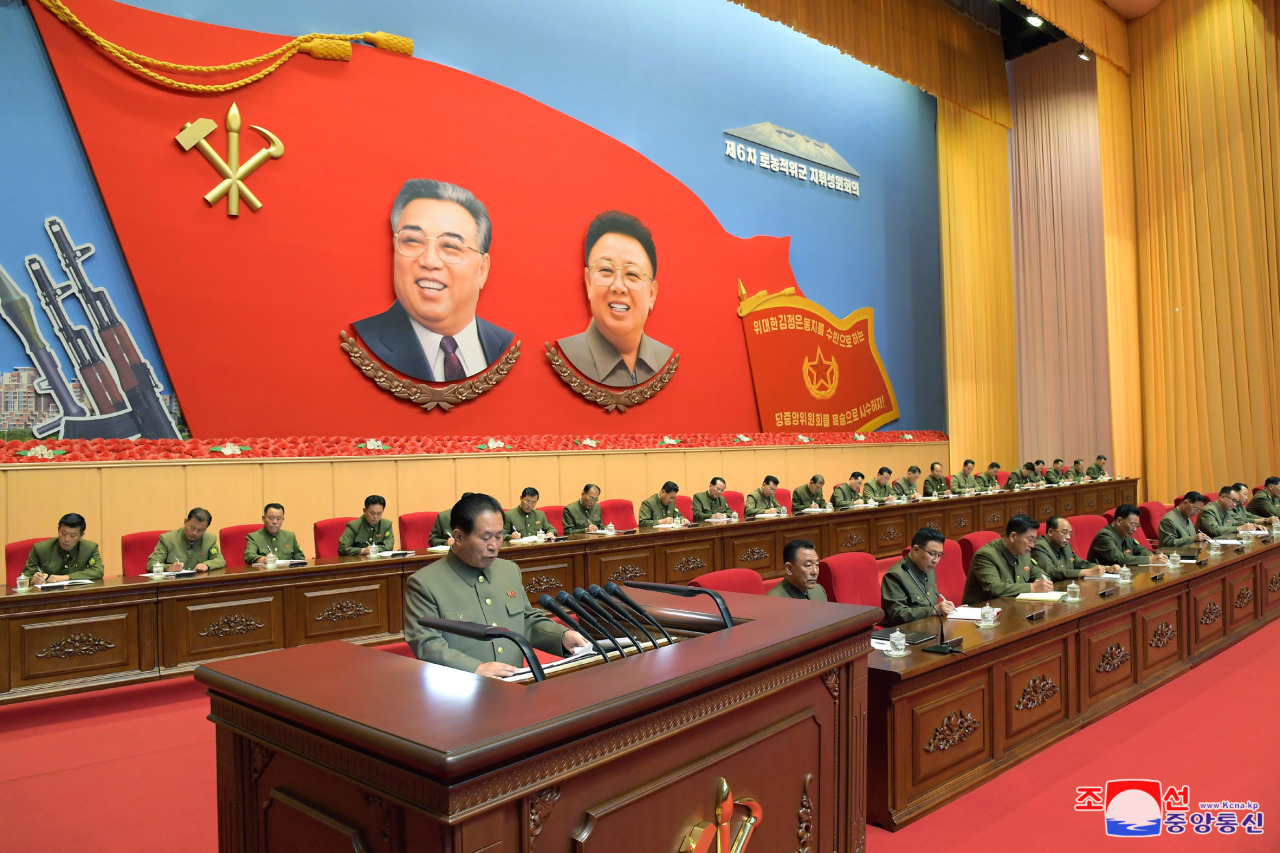 Commanding officials of the Worker-Peasant Red Guards hold a two-day meeting at the April 25 House of Culture in Pyongyang on its second day on Aug. 30, 2022, to discuss ways to enhance their combat capabilities, in this photo provided by the North`s Korean Central News Agency.(Yonhap)
North Korean commanders of paramilitary and reserve forces gathered for a full-scale meeting in Pyongyang for the first time in three years amid the “constant threat of war,” the state media reported Wednesday. The participants pledged to strengthen their combat capabilities for “all-people resistance.”

The sixth “Active Leading Personnel of the Worker-Peasant Red Guards” meeting was held at the April 25 House of Culture for two days on Monday and Tuesday, the North’s state-run Korean Central News Agency and the Rodong Sinmun, a party organ, said in their Korean-language reports.

The meeting aimed to review achievements and failures of the Party organizations at all levels and paramilitary forces in implementing the Party’s military strategy and further enhance the forces’ operational and combat capabilities to adapt to meet changing situations. Another goal was to “make a new shift in completing preparations for all-people resistance.”

Kang Sun-nam, department director of the Party Central Committee, briefed the guards’ achievements in bolstering their combat capabilities and reviewed and analyzed a series of failures of reserve forces in measuring up to the intention of the Party and meeting the demand stemming from the current internal and external circumstances.

During the meeting, North Korea’s reserve forces were repeatedly urged to decisively reinforce their combat capabilities to thoroughly prepare for “all-people resistance.”

Kang notably underscored that “strengthening civil forces and making full preparations for all-people resistance in the country where a constant threat of war lingers is an essential and crucial task for thoroughly defending the sovereignty and rights of the state and people to existence and development.”

Kang called on all the commanders to “fulfill their important responsibility and duty.”

The Worker-Peasant Red Guards are the country’s paramilitary and reserve forces, composed of around 5.7 million North Korean people, according to an official database provided by South Korea’s Unification Ministry.

The reserve forces carry out civil defense duties and support the Ministry of Social Security in peacetime. But they are available for military service in case of contingencies.

At the meeting, Pak Jong-chon, a member of the Presidium of the Political Bureau, conspicuously announced a road map to “perfect combat readiness of the paramilitary sector.”

Noteworthy timing
The gathering of reserve forces was held for the first time in around three years. The fourth and fifth meetings of Active Leading Personnel of the Worker-Peasant Red Guards were held respectively in February 2014 and February 2019, after Kim Jong-un took power in late 2011.

The latest meeting marks the first time that North Korea has gathered the leaders of paramilitary forces in August.

“This is a regular meeting that aims to bring military and national defense capabilities to perfection,” Kim In-tae, a senior research fellow at the Institute for National Security Strategy, told The Korea Herald.

“At the same time, the meeting is seen as a countermeasure corresponding to the current situation,” Kim added, referring to the ongoing South Korea-US combined military exercise and North Korea’s move to build military tensions with South Korea.

The timing is noteworthy given that South Korea and the United States have decided to conduct field training exercises during their annual major combined exercise for the first time in five years.

The meeting also began Monday as the second session of the 11-day Ulchi Freedom Shield combined exercise started. The second part seeks to practice counteroffensive operations, which attack the enemy’s weak points such as the side and rear of main forces, to secure the safety of South Korea’s capital.

North Korea’s external-oriented propaganda outlets have ratcheted up bellicose rhetoric against the Yoon Suk-yeol government, denouncing the major combined exercise as a “rehearsal for a war of invasion” against the country.

Kim Jong-un publicly warned in July that North Korea would “annihilate” South Korea’s conventional forces should they seek preemptive military action and confrontation against his country.

Professor Kwak Gil-sup of Kookmin University said the meeting could aim to internally heighten tensions and project threat perception onto the people in order to lay the groundwork for local provocations against South Korea.

“North Korea convened the meeting with the goal to escalate internal tensions and strengthen the internal unity rather than hastily making provocations at this juncture,” Kwak told The Korea Herald, noting the timing of the meeting.

“But I am concerned that North Korea would seek to heighten tensions on the Korean Peninsula by making provocations against South Korea after the country has created a climate of all-people resistance.”

Kwak braced for the possibility that North Korea could make local provocations in the inter-Korean border area to show its hardline stance against the Yoon government and gain the upper hand of it.

South Korea’s Defense Minister Lee Jong-sup also assessed this month that North Korea “has moved to make up an excuse for making provocations,” adding that Kim Yo-jong’s statement has increased the likelihood of military provocation in that context.