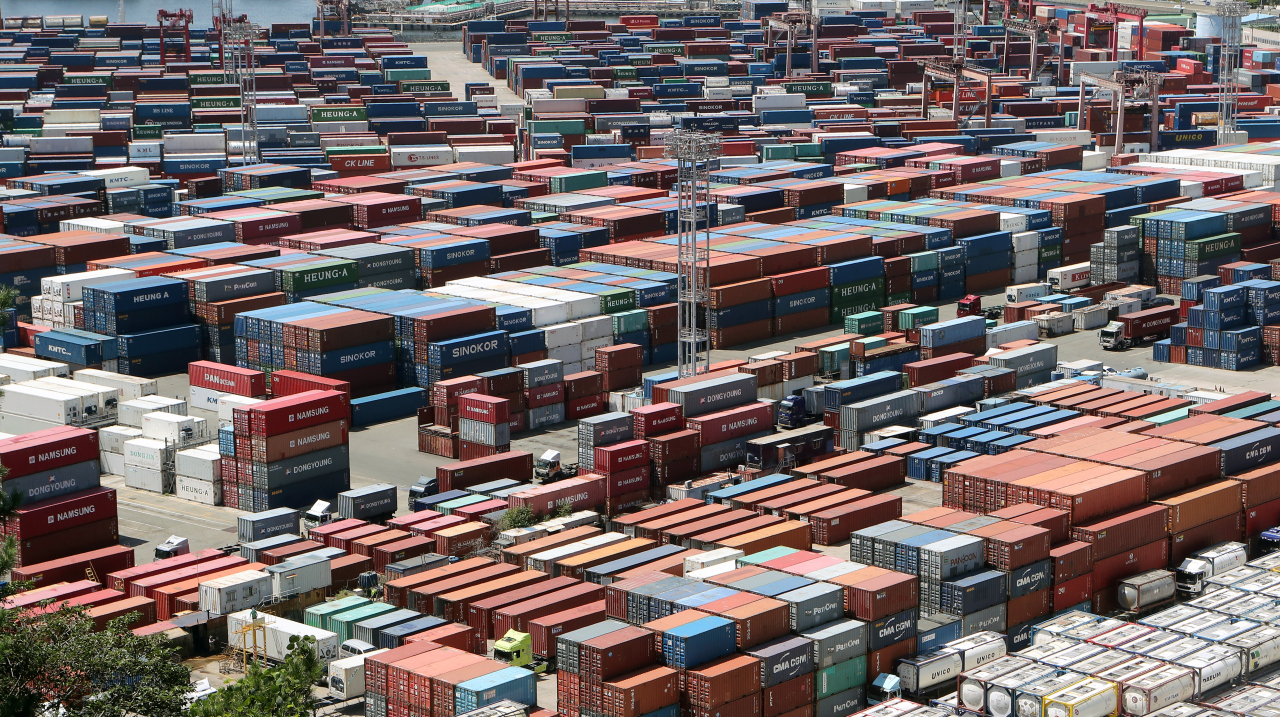 A view of the container terminal at Busan Harbor on Aug. 22 (Yonhap)
SEJONG -- Korea posted a triple decline in industrial output, consumption and investment in July amid the ongoing negative factors, such as spiraling raw material prices and a glitch in global supply, state data showed Wednesday.

Further, consumption decreased for the fifth consecutive month, which marked the first time in 1995 since the nation started compiling the relevant figures.

According to Statistics Korea, industrial output declined by 0.1 percent in July on-month, private consumption by 0.3 percent and facilities investment by 3.2 percent.

This marked another simultaneous decline in the three sectors this year, following the same situation in April. Previously, the triple decline was also reported in February 2020, when the pandemic initially hit the nation.

Though industrial output posted a bounce back in May and June with a 0.7 percent and 0.8 percent climb after posting a decline in April, it fell again in July due to a decline in the manufacturing segment.

Data showed that inventory increased in semiconductors by 12.3 percent, chemical products by 2.1 percent and machinery equipment by 1.7 percent.

In the private consumption sector, retail sales declined by 17.9 percent among duty-free stores, by 3.6 percent among large discount chains and by 0.9 percent among convenience stores. These led to an overall fall of 0.3 percent in the sector.

Facilities investment dropped by 3.2 percent in July after positive growth of 12.8 percent in May and 4 percent in June, as businesses including chipmakers have delayed investments amid a glitch in global supply and a spike in prices of raw materials.

A core negative factor which is undermining the economy involving consumption is the high inflation rate over the past several months.

To tame inflation, the government is applying a zero-percent tariff on seven import items, including beef, pork, chicken, baby formula, coffee beans, spirits for alcoholic drinks and scallions, for a specific period of time or on a certain amount.

Lowering the quota tariff brings the effect of lowering the prices on imported products, while the policy has brought about backlash from producers of domestic goods in the nation.