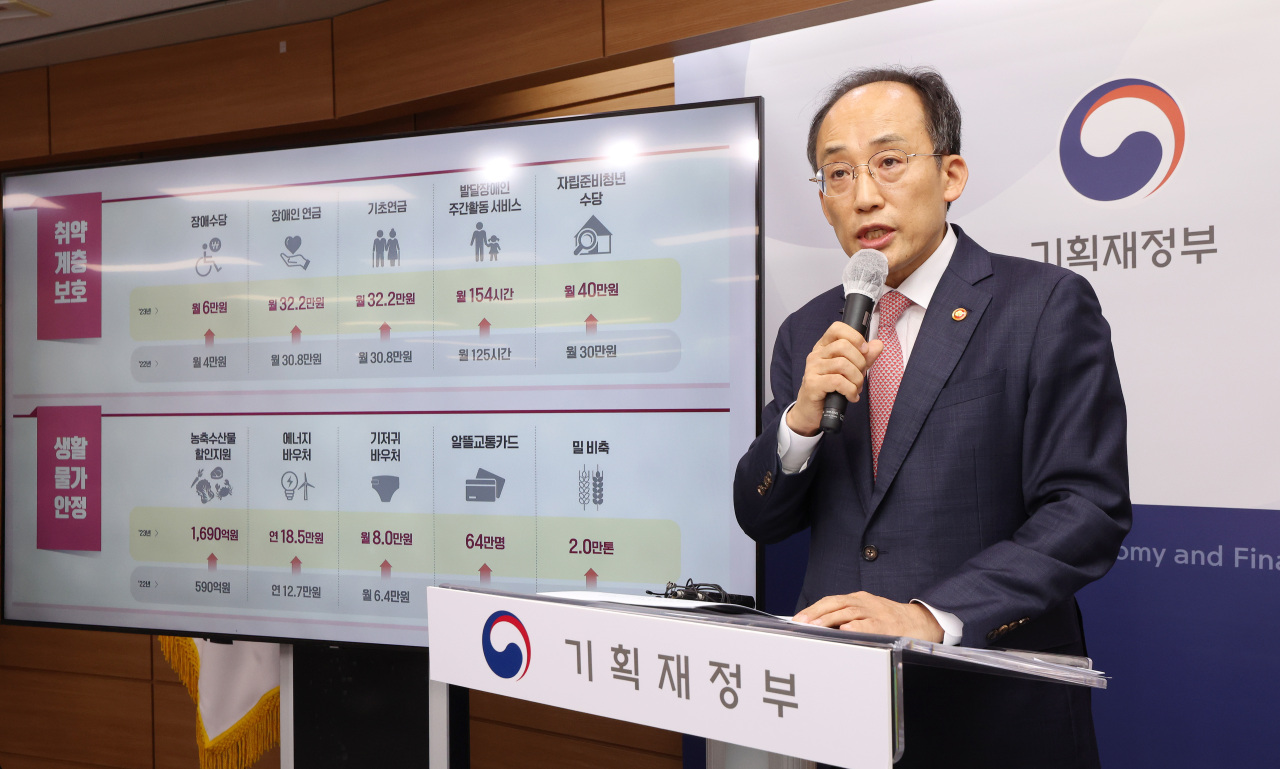 Choo Kyung-ho speaks during a press briefing on the government`s budget plan for 2023 in Sejong on Tuesday. (Yonhap)
SEJONG -- The Cabinet on Tuesday approved the 2023 budget proposal worth 639 trillion won ($473 billion), which is aimed at securing the fiscal soundness and lowering the ratio of national debt to gross domestic product by minimizing state expenditure.

Despite directions to refrain from conducting fiscal expansion, the first budget bill under the Yoon Suk-yeol administration sufficiently reflects its support plan for enlisted soldiers, households with infants, young people in their 20s as well as the underprivileged, the Finance Ministry said.

“It is very important to secure fiscal soundness amid the situation of multiple economic uncertainty. So (the government) drew up the budget proposal for the next year to the direction of improving fiscal soundness,” Deputy Prime Minister and Finance Minister Choo Kyung-ho told a news briefing.

A noteworthy segment in the 2023 state-spending plan is to raise the monthly pay for enlisted sergeants in the military by 58.5 percent from 820,000 won in 2022 to 1.3 million won by allocating 1 trillion won collectively.

Minor-rank soldiers will also enjoy the wage hikes within a similar extent.

In an attempt to promote childbirth, the government will introduce a policy to pay 700,000 won a month to households that have a baby under a year old in 2023. Those with babies aged between 1 and under-2 will be paid 350,000 won per month.

The Finance Ministry said the pay is dubbed “the monthly salary for parents,” which is a development from the payment of 300,000 won per infant in 2022, adding it will allocate 1.3 trillion won for the segment.

The budget bill also includes debt-rescheduling programs for small merchants, who have been hit by the pandemic, and care services for the disabled. Expenditures on these two segments will be 300 billion won, respectively.

In addition, the government will expand the budget allocation for the underprivileged to 31.6 trillion won, from 27.4 trillion won a year earlier. It said the measure is targeted to bolster their income, employment and residential conditions.

On employment, the Yoon administration will expand the private sector-initiated hiring instead of scaling back the job creation led by the public sector. The allocation will be increased to 12.1 trillion won from 11 trillion won in 2022.

State investment in the semiconductor industry will be increased by 900 billion won on-year from 2.8 trillion won to 3.7 trillion won.

The ministry is scheduled to propose the budget bill to the National Assembly this Friday.