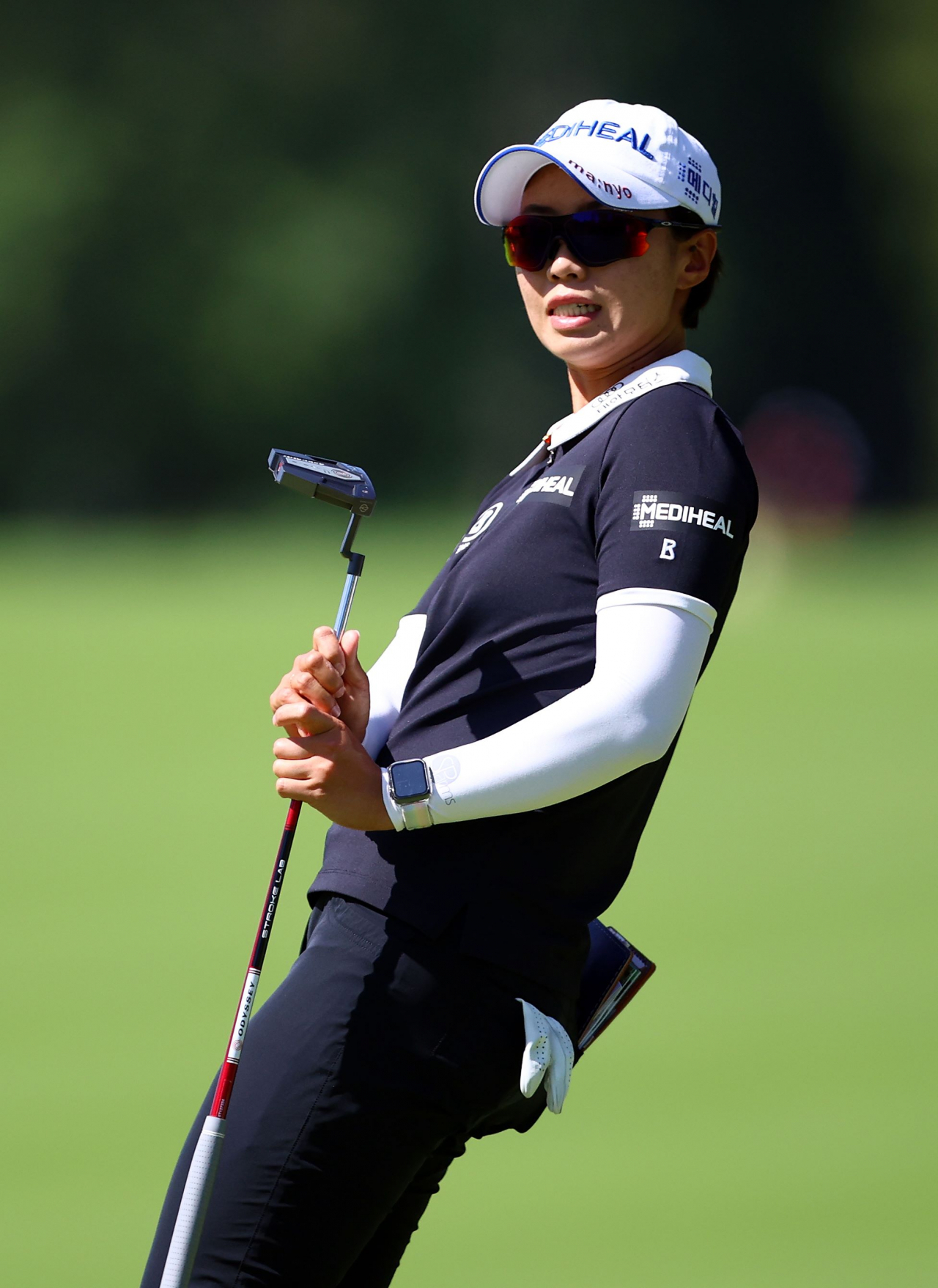 In this Getty Images photo, An Narin of South Korea reacts to a putt on the seventh green during the final round of the CP Women's Open at Ottawa Hunt and Golf Club in Ottawa on Sunday. (Getty Images)

Having frittered away their final round lead in Canada, South Korean LPGA rookies Choi Hye-jin and An Narin will have to wait longer for their maiden victory.

Choi finished tied for second at the CP Women's Open at Ottawa Hunt and Golf Club in Ottawa on Sunday (local time), while An ended in a tie for sixth. The two had shared the 54-hole lead at 16-under, but Choi shot a two-under 69 to end at 18-under 266, allowing Paula Reto of South Africa to zip past her for a one-stroke victory with a 67 in the final round. An shot a one-over 72 for a four-round total of 15-under. Her up-and-down round included a double bogey at the seventh and a triple bogey at the 10th.

Choi, An and Reto played together in the final group.

Choi, a three-time Korea LPGA (KLPGA) Player of the Year, is tied for second in the LPGA with fellow rookie Atthaya Thitikul with nine top-10 finishes in 2022.

Choi also closed the gap on the Thai sensation in the Rookie of the Year points standings. Thitikul still leads the way with 1,075 points, but Choi now has 1,015 points after her runner-up finish.

Rookies earn 150 points for each victory, 80 points for a runner-up finish and so forth. There are 10 tournaments remaining this season.

Choi told the LPGA afterward she had mixed feelings about her performance.

"I am really disappointed but at the same time, I am quite satisfied that I had a strong finish to the round," Choi said. "When the gap got bigger in the middle of the round today, I was feeling pretty down. But I made some good saves on the back nine, and I am especially happy to have played a bogey-free round today."

Reto charged out in front by collecting five birdies on the front nine, while Choi had pars on those nine holes, and An played herself out of contention with the double bogey at the seventh.

Choi only got her first birdie at the 15th hole and still trailed Reto by two shots at that point. She had an eagle attempt at the par-five 18th to pull even with Reto, but the putt fell a little short.

Amid a string of pars early on, Choi said she tried hard to stay patient coming down the stretch.

"I didn't convert a lot of birdie opportunities on the front nine. I didn't reach the green as much as yesterday, but I kept making pars," Choi said. "I told myself to keep waiting, and I was able to have some late birdies for a good finish."

Despite her near miss in Canada, Choi remains in contention for the top rookie prize. She said she will leave Ottawa with her head held high.

"I've always wanted to come to the LPGA Tour, and I'm grateful to be playing out here," she said. "I feel like I am making big strides every week. I'm happy to be playing here, and I want to play the rest of the season with confidence." (Yonhap)