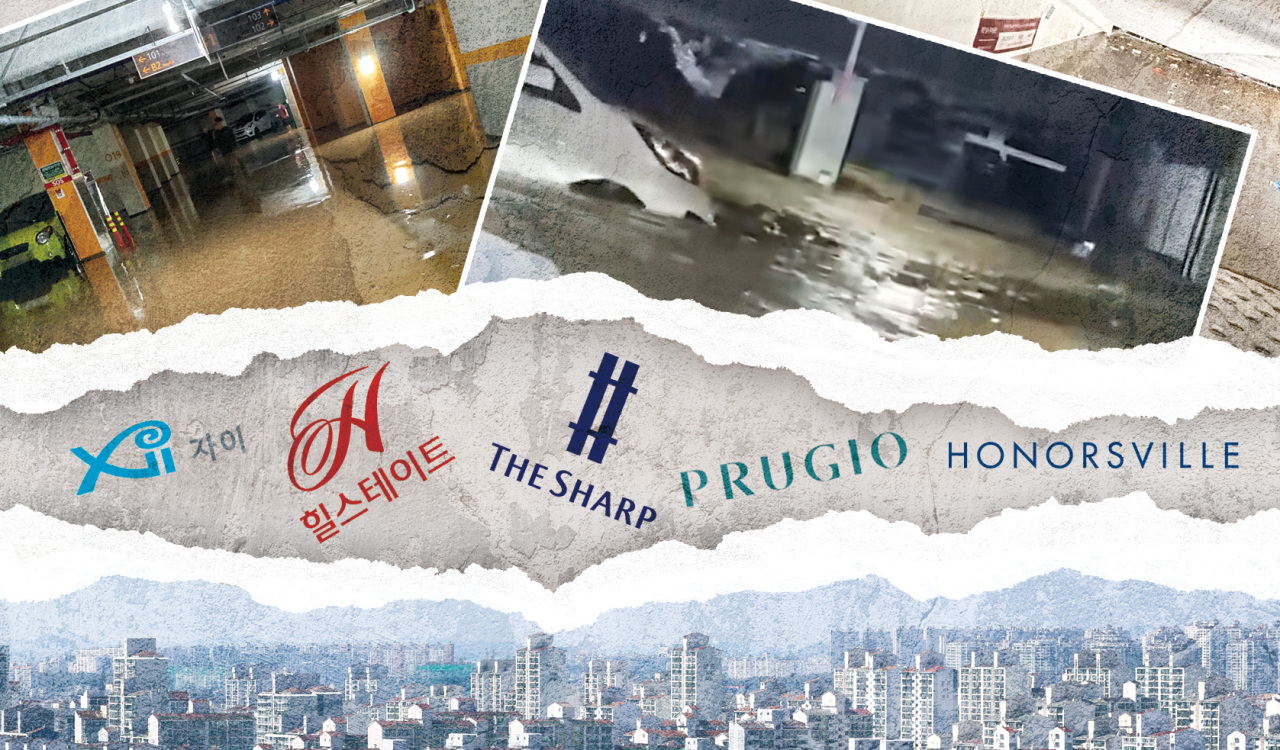 The record-breaking torrential rain on the night of Aug. 8 flooded the basement parking lots of several large apartment complexes in southern Seoul and Seongnam, a city just southeast of Seoul, not to mention hundreds of smaller dwellings, farms, barns and shops across southeastern Gyeonggi Province and other facilities in the capital.

The downpour was the heaviest in 115 years, but the floods drew attention to the lack of adequate measures for landslides and flooding, even in housing facilities that were built right next to steep mountain slopes. Some even went as far as to accuse developers for not caring enough about what happens after they sell the apartments.

As climate change increases the frequency of such extreme weather conditions, builders, developers, local authorities and the central government are under pressure to make sure homes don’t turn into “Waterworld” again, and to be more conscientious in giving building permits.

Since the night of Aug. 8, alarming video clips of muddy water gushing into underground parking lots of apartments such as Seocho Grand Xii, Banpo Xii in Seoul, and Hillstate Mobius officetel in Pangyo, Seongnam, have gone viral. An officetel is a multipurpose building with residential and commercial units.

The flood submerged and damaged some 270 vehicles at Mobius, which is built against a slope in the hilly Unjong-dong, Seongnam. The residents have demanded compensation and called on the city government to check if there were any problems in the building designs.

The builder, Hyundai Engineering and Construction, said the decision to erect the officetels there was made by the developer -- Fides Development -- which purchased the plot, designed the buildings and received Seongnam City’s approval for the project.

“We would be responsible if the buildings were not built as the developer’s approved designs. … If the developer or the city government requests for reinforcement works to prevent debris flows from the hills, we will do it,” a Hyundai E&C official said.

Fides Development did not respond to The Korea Herald’s request for comment.

An official at Seongnam City’s building permits department said the plot was designated for commercial facilities, a category which officetels fall into, under the Pangyo development plan executed by LH Corp. and approved by the Ministry of Land and Transport.

“Seongnam City gave permission for construction (to Fides Development) in accordance to the construction rules. As the residents suffered huge damages, we will ask Hyundai E&C what reinforcement plans they have to keep such incidents from happening again,” the city official said.

He added that Seongnam is not a flat land, and has many semi-underground buildings, resulting in huge flood damages. The city government’s environment affairs teams will work on measures to prevent similar disasters related to climate change, he said.

As for the Xii parking lots affected by the record flooding in the Gangnam-Seocho area of southern Seoul, a GS E&C official explained that the apartments’ trenches for drainage were large enough, but the central drainage system managed by the local government wasn’t, making the water surge back into the apartments.

As this wasn’t the first time the public drainage system proved to be insufficient to handle rainwater rushing into the Gangnam Station area, the ground level of which is more than 10 meters lower than the surrounding neighborhoods, Seoul City announced it will build additional rainwater catchment facilities such as drainage tunnels that allow more rainwater to flow into the Han River more quickly.

“Once the city builds these facilities, the flooding won’t happen again,” the GS E&C official said.

While some disgruntled residents were vocal about the damages and their plight, as was the case of Mobius in which an angry YouTuber who lives there went public about it, other homeowners were less forthcoming for fear of impacting home prices.

Other brand-name apartments in Seoul and Seongnam such as Prugio by Daewoo E&C, the Sharp by Posco E&C, Keangnam Honorsville by Keangnam Enterprises and Poonggyeongchae by Jeil Construction also suffered flood damages, but most residents preferred not to speak to the press about it.

Several residents were also doubtful the builders would take any action before next summer to prevent flooding, considering past experiences.

Since the early 2000s, the nation’s building giants vied for market dominance by promoting their apartment brands through commercials starring top celebrities, and smaller builders have followed suit. Their increased spending on marketing played a part in the rise of apartment prices.

Newly built, brand-name apartment estates these days have a lot of attention given to aesthetics, with high-grade pine trees, waterfalls and air-conditioned teahouses in the garden, but the recent flooding and a slew of other smaller problems have led residents to question how meticulously buildings have been built.

Hahm Hyo-jung, a resident of a new town called Daejang-dong in Seongnam, said she couldn’t understand why the rainwater would flow into her parking lot instead of the nearby stream.

“Homes are the most expensive product one can buy. … I feel like the companies and the local government are conniving by passing the buck to each other,” she said.

Building quality control and safety have come under renewed scrutiny, especially after the collapse of an apartment under construction in the southwestern city of Gwangju shocked the nation in January.

Early this month, marble wall tiles reportedly weighing about 30 kilograms each crashed to the ground in the lobby of an apartment in Irwon-dong, Gangnam, that was built only a year earlier.

In a separate case at Bangbae Grand Xii in Seoul’s Seocho-gu, containers of paint thinner and varnish that gave off fumes were found in the lowest basement level, prompting some angry residents to report it to a local broadcaster last week.

Employees of building maintenance contractors left the chemicals and equipment there after work to use them again later, and they have been removed now, the GS E&C official said.

As of now, the issue of tightening construction rules in light of climate change has not yet been addressed, let alone raised at the legislature level.

An aide to Democratic Party of Korea Rep. Kim Byung-wook, who sits on the parliamentary committee on land infrastructure and transport, told The Korea Herald he wasn’t aware of any discussions yet among legislators on how to prevent flood damage at residential facilities in regard to extreme weather. However, he expects the issue to be raised during parliamentary inspection sessions in October.

An aide to People Power Party Rep. Kim Sun-gyo of the severely flooded Yeoju-Yangpyeong constituency, who is also a member of the parliamentary committee, said the counties were still in the process of identifying victims as the area was designated last week as a “special disaster zone” where reparation for damages will be made partially from state coffers.