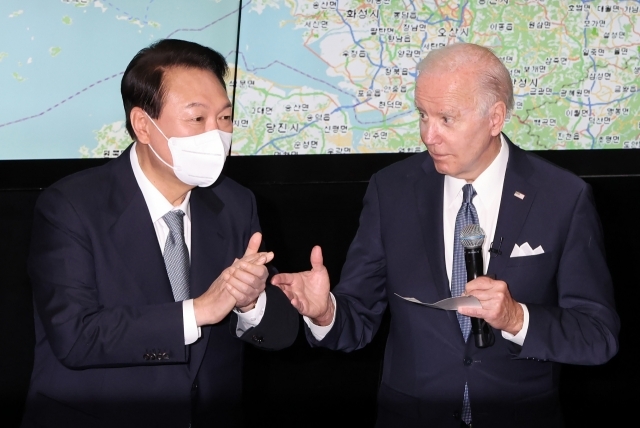 President Yoon Suk-yeol (left) and President Joe Biden at the Korean Air and Space Operations Center at the US Air Force Base in Osan, Gyeonggi Province, in May. (Yonhap)

President Yoon Suk-yeol is expected to meet with US President Joe Biden next month in New York on the occasion of 77th session of the United Nations General Assembly.

The White House said on Thursday (local time) that Biden plans to visit New York for three days from Sept. 18 to attend the UN General Assembly. He is expected to attend the conference during Sept. 19-20 and meet with leaders of the major nations.

As President Yoon is also expected to attend the UN General Assembly for the first time since taking office, he is likely to meet with Biden in New York, the second time since they had a bilateral summit in May in Seoul.

When the two leaders of Korea and the US meet, they are expected to exchange opinions in multiple issues, including North Korea’s nuclear weapons, building peace on the Korean peninsula and expanding bilateral economic cooperation.

US Department of State Spokesperson Ned Price said in a daily press briefing last week, “We have been clear about our support for the bold or the ambitious plan that the South Korean administration has put forward.”

“It’s a plan that’s entirely consistent with our approach to the DPRK’s nuclear weapons program, to its ballistic missile program in that it sees the potential for practical, incremental advancements towards the complete denuclearization of the Korean Peninsula,” added Price.