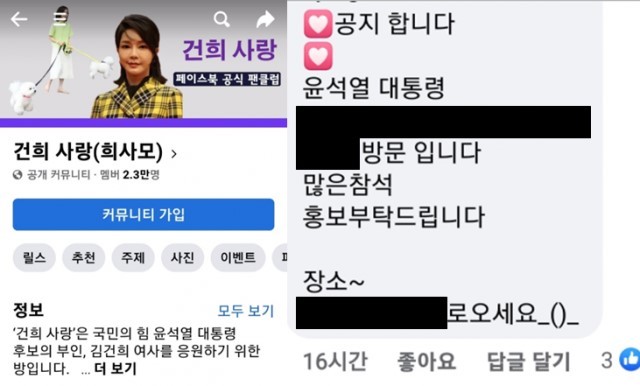 President Yoon Seok-yeol’s schedule is posted on the Facebook group page of a fan club for first lady Kim Keon-hee on Tuesday. (Screenshot)

On Tuesday, a user of “Keon-hee Sarang” revealed Yoon’s official schedule set on Friday through her fan club, specifying the date and place.

The user said, “We’re announcing (that) President Yoon Suk-yeol is visiting Daegu Seomun Market at 12:00 (noon) on Aug. 26. We ask for your participation and promotion. Please come to the public parking lot.”

The official schedule of the president is confidential until the end of the event for security reasons. The president’s office previously notified the press corps that an “on-site visit” would take place Friday on the condition of being off-the-record during a press embargo, but did not give the specific location. The specific date and place, which had been kept private for security, were revealed through Kim’s fan club.

This is not the first time that Mrs. Kim’s fan club has been involved in a security controversy. In May, photos of President Yoon and first lady Kim taken at the Yongsan Presidential Office were uploaded to Keon-hee Sarang. The office is a security area where filming is restricted without prior permission.

At the time, an official from the presidential office said it was taken by an employee of the affiliated office who received Kim’s phone, and it probably was Kim who provided the photo.

Regarding the leak, the presidential office apologized, saying, “It should not happen,” adding, “We will look into it so that it will not happen again.”