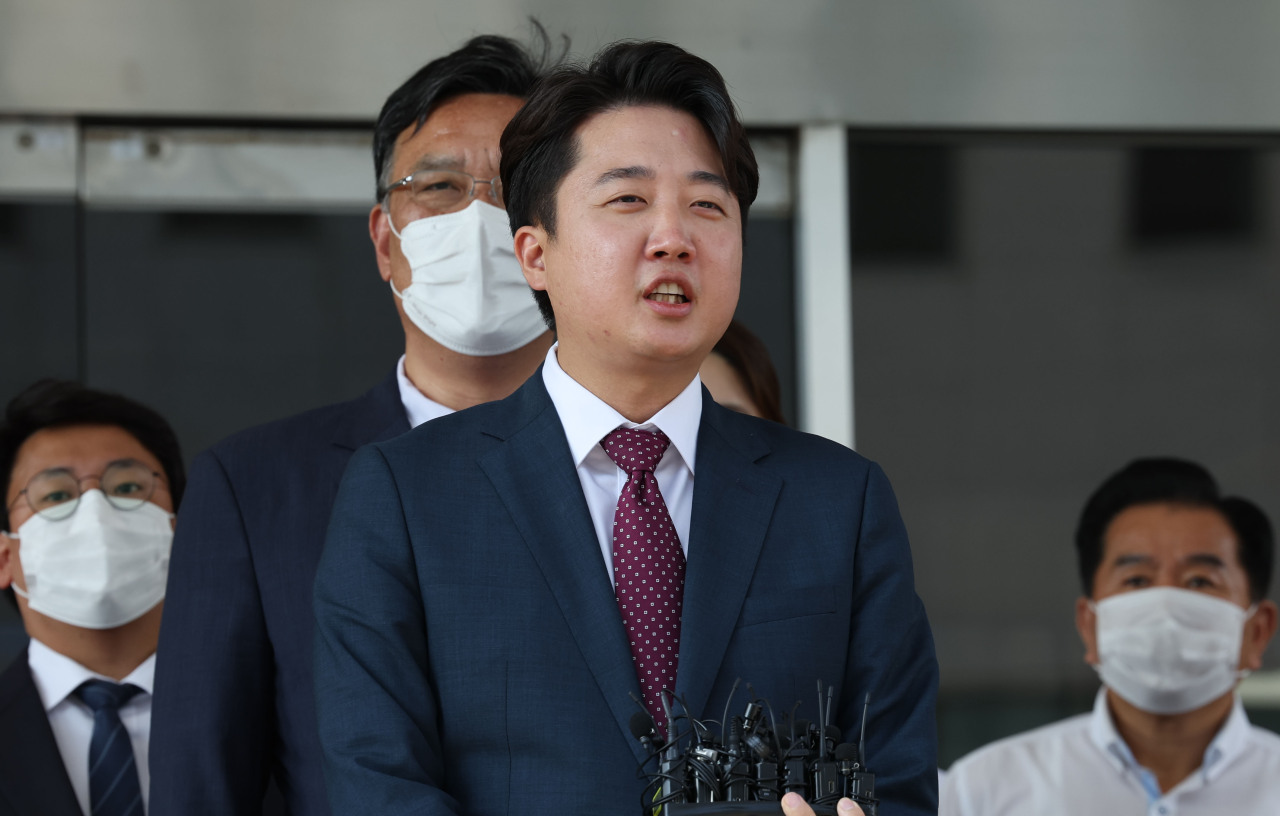 Suspended leader Lee Jun-seok of the People Power Party (Yonhap)
The internal feud within the ruling People Power Party appears to be escalating following a petition submitted to the court by suspended party leader Lee Jun-seok. The petition‘s release comes amid the ruling party’s launch of an emergency committee to seek the party’s normalization and the Yoon administration‘s carrying out of partial reforms to regain public trust.

Lee compared President Yoon Suk-yeol to “the new military coup forces” in the petition, and, in return, the ruling party called Lee “a dictator” and “a grenade with its safety pins removed.”

On late Tuesday night, Lee uploaded the original text of his handwritten petition on Facebook, which sparked controversy after being partially leaked to the media. He claimed that the People Power Party intentionally revealed the partial petition to the press.

On that day, Lee revealed the full text of the 2,385-character petition on his Facebook account, saying that he was the only one with the full unedited version.

The petition was submitted by Lee to the Civil Affairs Department 51 of the Seoul Southern District Court, the court in charge of applying for an injunction to suspend the validity of the party’s emergency committee on Friday. He took legal action to protest the party’s transition to the emergency committee.

The petition said: “If the current situation is not rectified by the judiciary, there is a possibility that the person with absolute power who led it will more actively exercise their right to declare an emergency this time, like a new military government expanding martial law.” Lee defined President Yoon Suk-yeol as the person with absolute power.

After the local elections in June this year, Lee received an offer from someone close to “the person with absolute power” to mediate the disciplinary process of the ethics committee and the police investigation process in return for becoming a presidential envoy if he steps down by December, the petition said.

After the petition was released, the ruling People Power Party denounced Lee.

Joo Ho-young, chairman of the emergency committee, responded, “Lee seems to have become a dictator.” People Power Party lawmaker Kim Ki-hyun also compared Lee to a “grenade with safety pins removed” and added, “If his imagination goes too far, he will become delusional and destroy himself.”

Former lawmaker of the People Power Party Chung Mi-kyung said on Wednesday, “If the Yoon Suk-yeol government was a new military government, I don’t think he would let Lee talk like this now. The conceit is not correct.”

Asked about the petition at a briefing later in the day, Kim Eun-hye, senior secretary for public relations, said, “I also saw it being reported on the news on the way to the briefing. I don’t think it’s appropriate for me to comment.”

Political commentator Park Chang-hwan said the confusion in the ruling party is expected to continue for a while.

“The controversy continues now because the party’s current situation is literally an ‘emergency’ committee. Lee Jun-seok’s future has not been decided, and the lawsuit surrounding him is not over yet,” Park said.