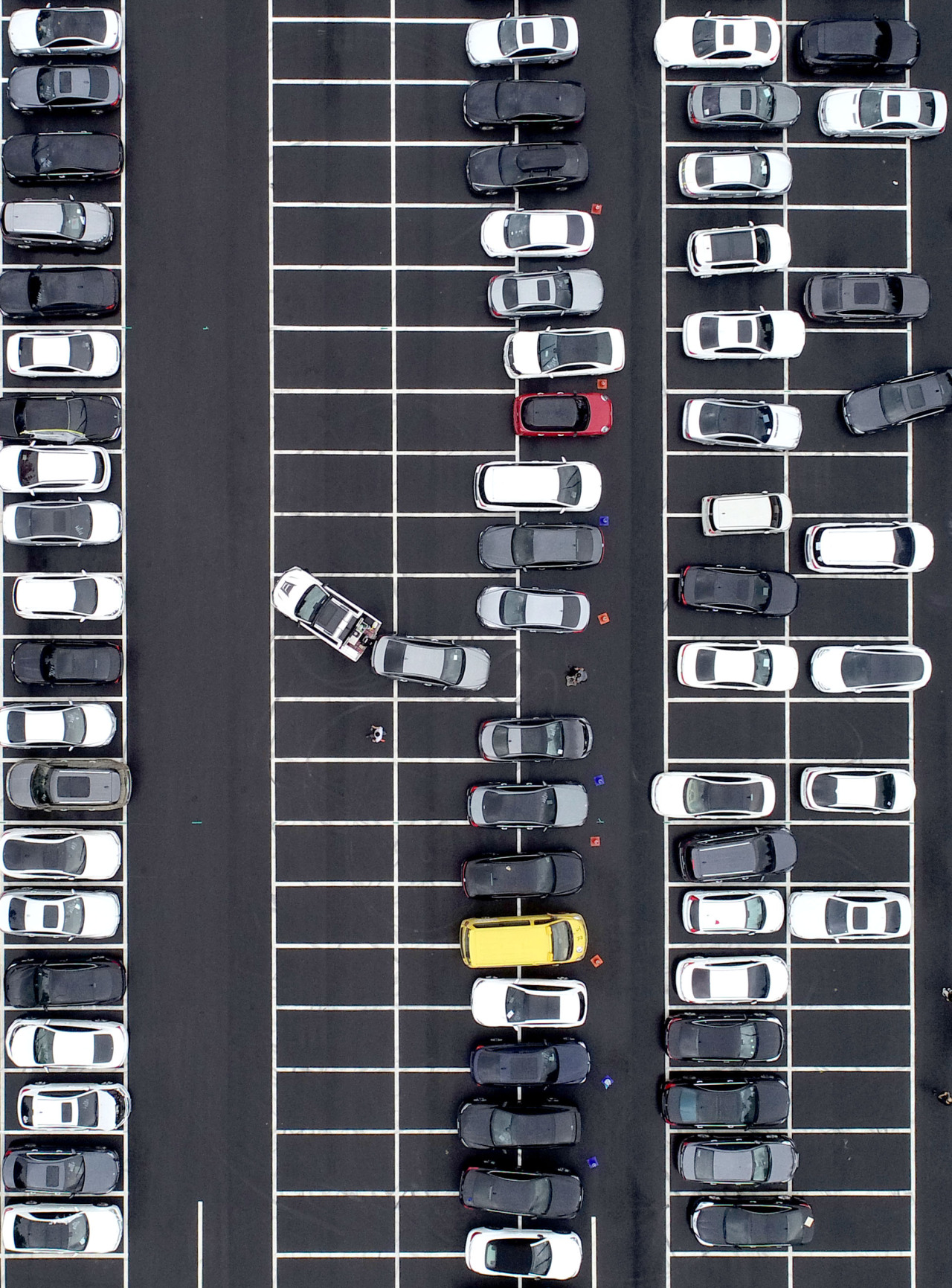 Flooded cars are moved to the parking lot of an amusement park in Gwacheon, Gyeonggi Province, early this week. (Yonhap)
A Lamborghini Aventador, the Italian supercar whose price tag is more than 500 million won ($400,000) here, was recently put up for sale on Danggeun Market -- a popular online flea market platform -- for just 1 million won.

The owner claimed that the car was submerged during the heavy rainfall last week in Seoul, and that he cannot start the car any longer -- but the interior remains clean, and other features like air conditioning and lighting still work.

“The car will become a luxurious item to adorn your garage or backyard,” he added.

The defunct road machine is one of thousands of cars that were damaged or destroyed by record downpours in Seoul, especially in the posh Gangnam area, where almost 40 percent of the nation’s import luxury cars are registered.

According to the General Insurance Association of Korea, a total of 11,142 damage claims for flooded cars, including 3,599 import cars, have been submitted through local insurance companies as of Tuesday. The total damage amount is estimated to reach 158.3 billion won, a record since related data started being collected.

Water ruins electronics parts and mechanical systems in cars. Due to safety reasons, flooded cars reported to insurance companies are usually declared a total loss, but some of them return to the used car market without sellers clarifying the cars’ waterlogged histories.

“The problem is that some insurance companies sell the cars to used car dealers, who repair the cars to resell. Potential buyers should be aware of the risks,” Kim said.

Amid growing concerns in the used car market, the Transport Ministry said Monday that it will tighten monitoring on the management of vehicle history to cover vehicles without insurance records, hinting at strengthening punishment for illegal and shady deals.

Currently, the Korea Insurance Development Institute offers a car history tracking system called CarHistory which provides data on used cars, including the number of accidents, flood damage and distance driven. Still, the system is not all-inclusive -- nor a guarantee that the vehicle is problem-free.

“Because there are many electric or hybrid cars these days, buying a flooded car has become a greater threat to the driver’s safety,” said an official of the KIDI who wished to be unnamed.

Despite the government’s tightened measures, experts say buyers also should heighten their scrutiny to better protect themselves.

One of the effective ways to detect a flooded car is checking the engine fuse box.

If the fuse box is relatively new compared to the car’s engine room, there is a high possibility that it is a flooded car, as fuse boxes get ruined when the car gets fully submerged in water.

Pulling the seatbelt out to the very end is another way to check whether it’s a flooded car, as mud stains cannot be easily removed from seatbelts.