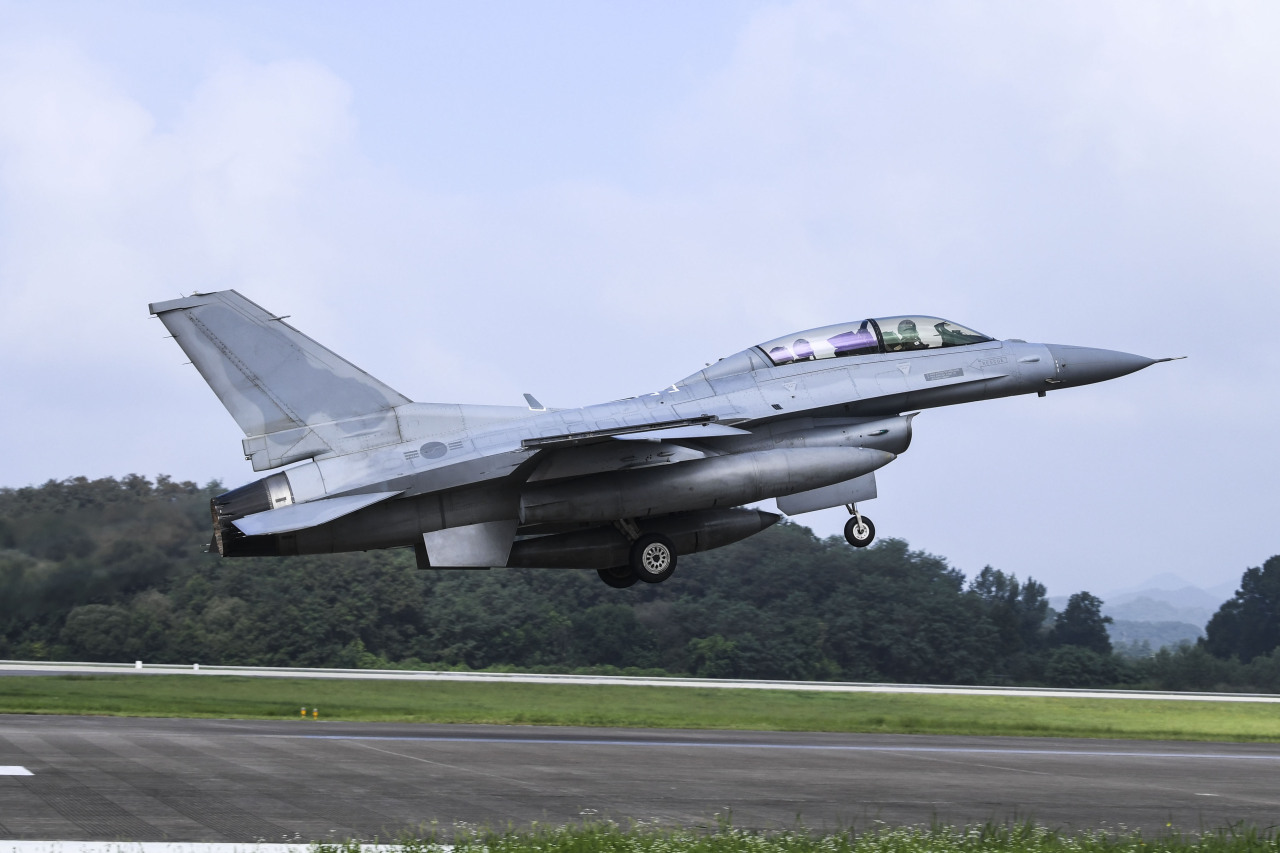 South Korea’s KF-16 fighter jet takes off from Jungwon Air Base in Chungju, North Chungcheong Province, on Thursday to participate in the Australia-led Exercise Pitch Black 2022, which will be staged from Aug. 29 to Sept.7. (Air Force)
South Korea’s Air Force will join an Australia-led large-scale multilateral air combat exercise for the first time to enhance interoperability and military cooperation with participating Indo-Pacific countries and key NATO members.

South Korea’s fighter jets departed Jungwon Air Base in North Chungcheong Province on Thursday for Base Darwin in the Northern Territory of Australia to take part in Exercise Pitch Black 2022, South Korea’s Air Force announced in a statement Thursday.

Exercise Pitch Black led by the Royal Australian Air Force is scheduled to be staged from Aug. 29 to Sep. 7 at bases Amberley, Darwin and Tindal after a four-year hiatus.

The biennial large-scale air combat exercise will host up to 100 aircraft and 2,500 personnel from 17 countries, which consist of Australia, Canada, Germany, France, India, Indonesia, Japan, Malaysia, the Netherlands, New Zealand, the Philippines, Singapore, South Korea, Thailand, the United Arab Emirates, the United Kingdom and the United States, the Australian air force said on its website.

The live-fly exercise aims to “enhance regional security through multinational interoperability and understanding,” the Australian air force said. “Activities such as Exercise Pitch Black recognize Australia’s strong relationships and the high value we place on regional security and fostering closer ties throughout the Indo- Pacific region.”

South Korea’s Air Force was an observer of Exercise Pitch Black from 2010 to 2018.

“Our Air Force seeks to expand the training areas of combined operations to the southern hemisphere through participation in the exercise and to enhance interoperability and strengthen combined operational capacity by conducting aerial operations with various air forces from several countries,” South Korea’s Air Force said.

The air combat exercise “features a range of realistic, simulated threats which can be found in a modern battle-space environment and is an opportunity to test and improve our force integration,” the Australian air force also said on its website.

South Korea’s participation comes after the South Korean and Australian defense chiefs this month committed to reinvigorating cooperation in conducting bilateral and regional military exercises during an in-person meeting in Canberra.

Apart from South Korea, Germany and Japan are also taking part in Exercise Pitch Black for the first time.

“With this deployment, our participation in the exercises in Australia, and the further joint projects with our partners in Singapore, Japan and South Korea, we are sending a clear message: the Air Force can be deployed quickly and over global distances -- even with several missions to be fulfilled in parallel.”

NATO Allied Air Command on Monday said Australia has “created an opportunity for bringing the air forces together and promoting mutual understanding of global security issues” by inviting NATO members to conduct interoperability training with its partners and other air forces in the Indo-Pacific region.