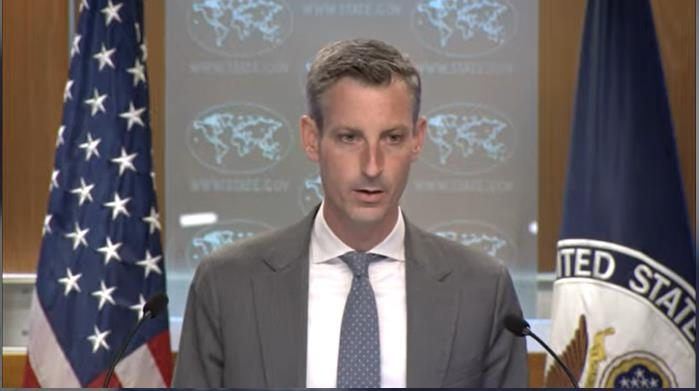 Department of State Press Secretary Ned Price is seen answering questions during a press briefing in Washington on Wednesday, in this image captured from the department's website. (Yonhap)

WASHINGTON -- The United States will continue to maintain strong sanctions against North Korea until the recalcitrant country changes its behavior and engages in dialogue, a state department spokesperson said Wednesday.

"We will continue to maintain those sanctions until and unless the underlying conduct, the underlying activity changes and North Korea alters its fundamental approach," the spokesperson said in a daily press briefing.

Price also reaffirmed US commitment to the defense of South Korea and other US allies in the region.

"Our commitments in the face of the DPRK's continued provocations to the security of our allies, including the ROK and Japan, and of course in the Indo Pacific is ironclad," said Price, referring to North Korea by its official name, the Democratic People's Republic of Korea.

"Until and unless the DPRK changes its approach and takes us up on our offer of pragmatic, practical dialogue and diplomacy, leading towards that ultimate goal of the complete denuclearization of the Korean Peninsula, we will continue to coordinate closely with our allies, both to seek engagement but also to ensure that the DPRK is held accountable, held accountable for its continued provocations," he added.

North Korea fired the cruise missiles as South Korean President Yoon Suk-yeol reaffirmed his commitment to helping North Korea as long as the impoverished country shows commitment to denuclearization in a press conference, marking the 100th day of his inauguration.

The state department spokesperson said the US supports the South Korean leader's initiative to engage with North Korea.

"We strongly support what we have heard from President Yoon. We support the ROK's aim to open a path for serious and sustained diplomacy with North Korea," said Price.

"It is not only our goal. It is our shared and collective goal to see the complete denuclearization of the Korean Peninsula and we are committed to working very closely with President Yoon," he added.

Price declined to comment directly on what he called North Korea's "alleged cruise missile launches," only saying the country's recent ballistic missile launches were a clear threat to peace and security in the region.

"I think looking over the longer arc, especially in recent years where the DPRK's provocations, including its launches of ballistic missiles, including ICBMs and ICBM technology, those are clear provocations. They are a clear threat to peace and security in the Indo Pacific and potentially beyond," he said.

"And that is really at the crux of our determination to continue working closely with our treaty allies and with other allies and partners throughout the Indo Pacific and well beyond."

North Korea fired more than 30 ballistic missiles this year in 18 rounds of missile launches, with the last round held on June 5. (Yonhap)