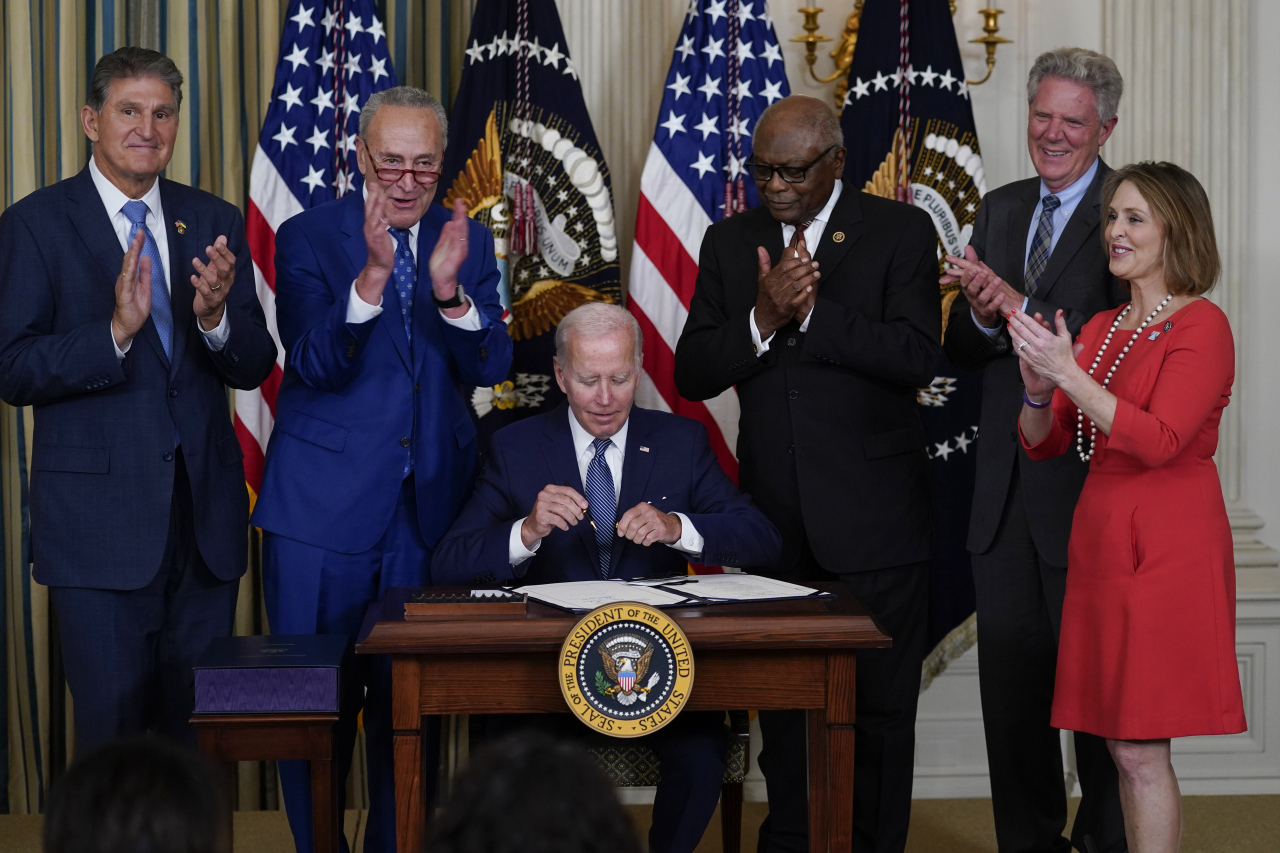 US President Joe Biden (center) signs the Inflation Reduction Act of 2022 into law during a ceremony in the State Dining Room of the White House in Washington, Tuesday. (AP-Yonhap)
Hyundai Motor Group’s ambitious green push has hit a snag in the all-important US market as President Joe Biden on Tuesday signed a new bill that has immediately scrapped subsidies for electric vehicles made outside America.

Under the $430 billion Inflation Reduction Act, up to $7,500 of tax credits will be offered to “Made in US” EVs to help lift the portion of eco-friendly vehicles to 50 percent of all car sales in the local market by 2030.

Hyundai Motor and its smaller affiliate Kia have not yet secured production facilities for EVs in the US. They therefore cannot benefit from the hefty incentives designed to lure consumers into choosing EVs over conventional combustion engine cars.

Upon Biden’s summit talks with South Korean President Yoon Suk-yeol in Seoul in May, the Korean auto giant announced a $5.5 billion plan to build EV and battery manufacturing facilities in the US state of Georgia – the first of its kind outside its home turf.

But the plant, with an annual production capacity of some 300,000 vehicles, is expected to start production no earlier than the first half of 2025.

The carmaker could start producing the full-electric version of the Genesis GV70 luxury SUV at its existing Alabama plant from October, but the effect will be limited considering its top-selling Hyundai Ioniq 5 and Kia EV6 will be produced at home for some time.

The new bill came at a crucial juncture. Hyundai and Kia became the second-largest EV makers in the US, with a combined 27,000 units sold in the January-May period after Tesla, the world‘s bestselling EV brand.

Largely buoyed by robust EV sales, the Korean automotive duo also ranked third globally in car sales by selling 3.29 million vehicles in the first half of this year, a first for the nation’s largest carmaker.

Experts say a strategic shift seems unavoidable for the carmaker’s new launches next year in the North American market, including the Ioniq 6 and the EV9, the successors of its popular EVs.

“Hyundai Motor and Kia will have to restructure their US launch and marketing plans for their EV portfolio, a critical issue as it involves US manufacturing and battery procurement ... which cannot be fixed, realistically, right away,” said professor Kim Pil-soo of automotive engineering from Daelim University.
The US bill also includes provisions aimed at preventing the use of battery parts or critical minerals imported from China.

Starting next year, more than 40 percent of mining, processing and assembly activities involved in battery production must take place in North America and in countries that have signed free trade agreements. The proportion would rise to 80 percent by 2027.

Also, more than 50 percent of battery components must be made in North America.

“The best-positioned companies would be market leader Tesla, which has been preparing to bring the supply chain to the US for a long time. Facing much bigger hurdles are firms like Toyota, with heavy reliance on supply chains that do not meet the guidelines in the legislation,” said an industry insider who requested anonymity.

Last week, the Korea Automobile Manufacturers Association sent a letter to the US House of Representatives, requesting the US to include EVs and battery components manufactured or assembled in South Korea on the list of those eligible for US tax benefits, citing the US-Korea Free Trade Agreement.