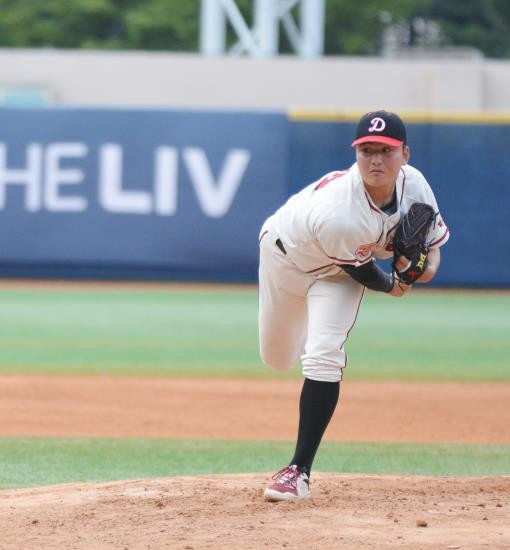 In this file photo from July 22, 2022, Shim Jun-seok of Duksoo High School pitches against Jangchung High School in the round of 16 at the 77th Blue Dragon Flag National High School Baseball Championship at Mokdong Stadium in Seoul. (Yonhap)

In a bid to sign with a major league club, South Korean high school pitching prospect Shim Jun-seok has decided to skip the annual rookie draft in the South Korean league.

The Korea Baseball Organization (KBO) announced Wednesday that Shim, the third-year right-hander for Duksoo High School in Seoul, did not register for the Sept. 15 draft. The deadline to enter the draft was midnight Tuesday.

Shim, 18, has been a highly-touted prospect since his freshman year in 2020, when he went 4-1 in eight games with a 1.42 ERA in 19 innings. He struck out 32 and walked nine. Listed at 194 centimeters and 103 kilograms, Shim threw his fastballs well over 150 kilometers per hour (93.2 miles per hour) even as a first-year student. Shim was named the best pitcher at the 2020 Korea Baseball Softball Association President's Cup National High School Baseball Tournament, after going 3-0 with a 1.20 ERA.

In 2021, Shim did not give up an earned run in 14 1/3 innings across five appearances, with 21 strikeouts against 10 walks. Though an elbow injury limited Shim to only a handful of games, talks of Shim being the first overall pick in the KBO draft began circulating in earnest.

Shim's stock has fallen considerably this year, though. Hobbled by a lower back injury, Shim has pitched to an underwhelming 5.14 ERA over 20 2/3 innings in 12 appearances. He does have 40 strikeouts, but he has also walked 22 batters and hit 12 others. While his velocity ticked up -- he touched 157 kph earlier this year -- Shim's command deserted him.

After suffering a hairline fracture to his right big toe during a national tournament earlier this month, Shim is unlikely to pitch again this year.

If players that skip the KBO draft sign with a foreign club, they won't be able to join a KBO club until two years after the end of their contract with the foreign team.

Even if such players don't land with an overseas team, they must wait two years before entering the KBO draft.

In August last year, high school outfielder Cho Won-bin withdrew from the KBO draft so he could take his talent across the Pacific. He signed with the St. Louis Cardinals in January this year. (Yonhap)