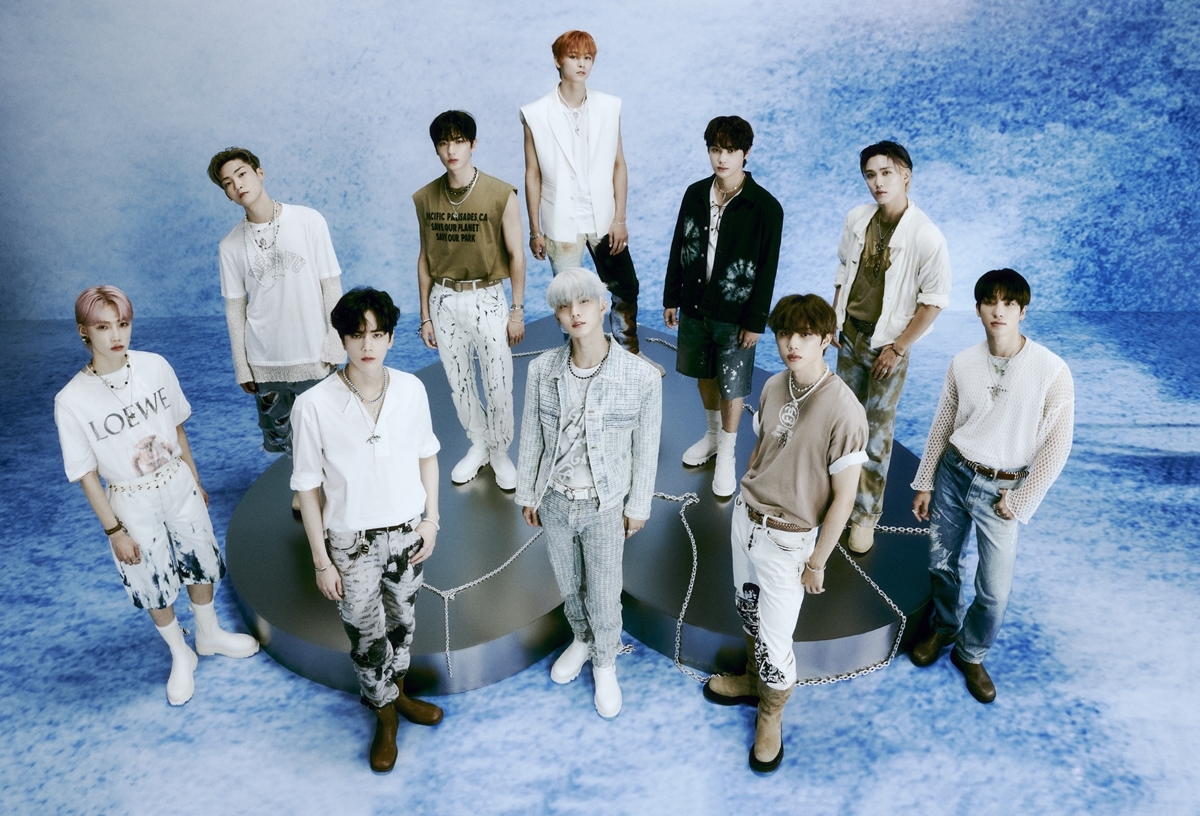 Group image for the Boyz’ seventh EP “Be Aware” (IST Entertainment)
Less than two weeks have passed since the Boyz ended their first world tour, “The B-Zone,” in Seoul with three days of encore concerts, and the act is already back with fresh new sounds and performances to fill fans’ summer.

Ahead of dropping its seventh EP, “Be Aware,” at 6 p.m. on Tuesday, the bandmates shared their feelings and thoughts through an official press statement released that morning.

“It’s exciting to be making this comeback after almost nine months with ‘Maverick,’ especially after successfully holding our first world tour ‘The B-Zone’ and the encore concerts in Seoul,” Sangyeon said in a statement released to local press by the act’s agency, IST Entertainment.

The band enjoyed a big year in 2021, scoring their first half-million-seller with its sixth EP, “Thrill-ing,” and going on to best their previous records with the third single “Maverick,” which released in November.

Officially an 11-piece act consisting of Sunwoo, Sangyeon, New, Q, Kevin, Hyunjae, Jacob, Eric, Younghoon, Juyeon and Juhaknyeon, the act has been performing down one since March when Eric went on hiatus due to health issues.

The new album is a six-track EP that depicts the waves of emotion inside the bandmates as they come to face a forbidden love.

Fronting “Be Aware” is lead single “Whisper,” boasting the group’s unique energy through the lyrics and performance depicting the moment of dopamine surge triggered as the senses are electrified by a whisper.

Hyunjae said in Tuesday’s statement about the song, “It’s noteworthy that the lyrics describe that certain moment, and the song becomes more special thanks to its performance that is fresh yet sexy at the same time.”

A fan song devoted to the group’s official fandom, the B, “Timeless” was unveiled ahead of the album’s official release at the group’s encore concerts earlier this month. As a surprise gift for local fans, the band played the music video and performed the song live.

The members have pushed the envelope further as musicians with the new album, especially as lyrics of all six songs were created in part or whole by some of the bandmates. Sunwoo, Sangyeon, New, Q and Hyunjae together penned the words for “Timeless.” Sunwoo is credited as a lyricist on all of the songs, including the lead song that also contains the lyrical contributions of Jacob. “Survive the Night” had the words written single-handedly by Sunwoo.

About the fan song, New said, “The song turned out great as we made the song thinking only about our fans, and we’re very satisfied with it. It’s filled with the words that we’ve wanted to say to the Bs, so we hope that many listen to the song and feel our words through it.” 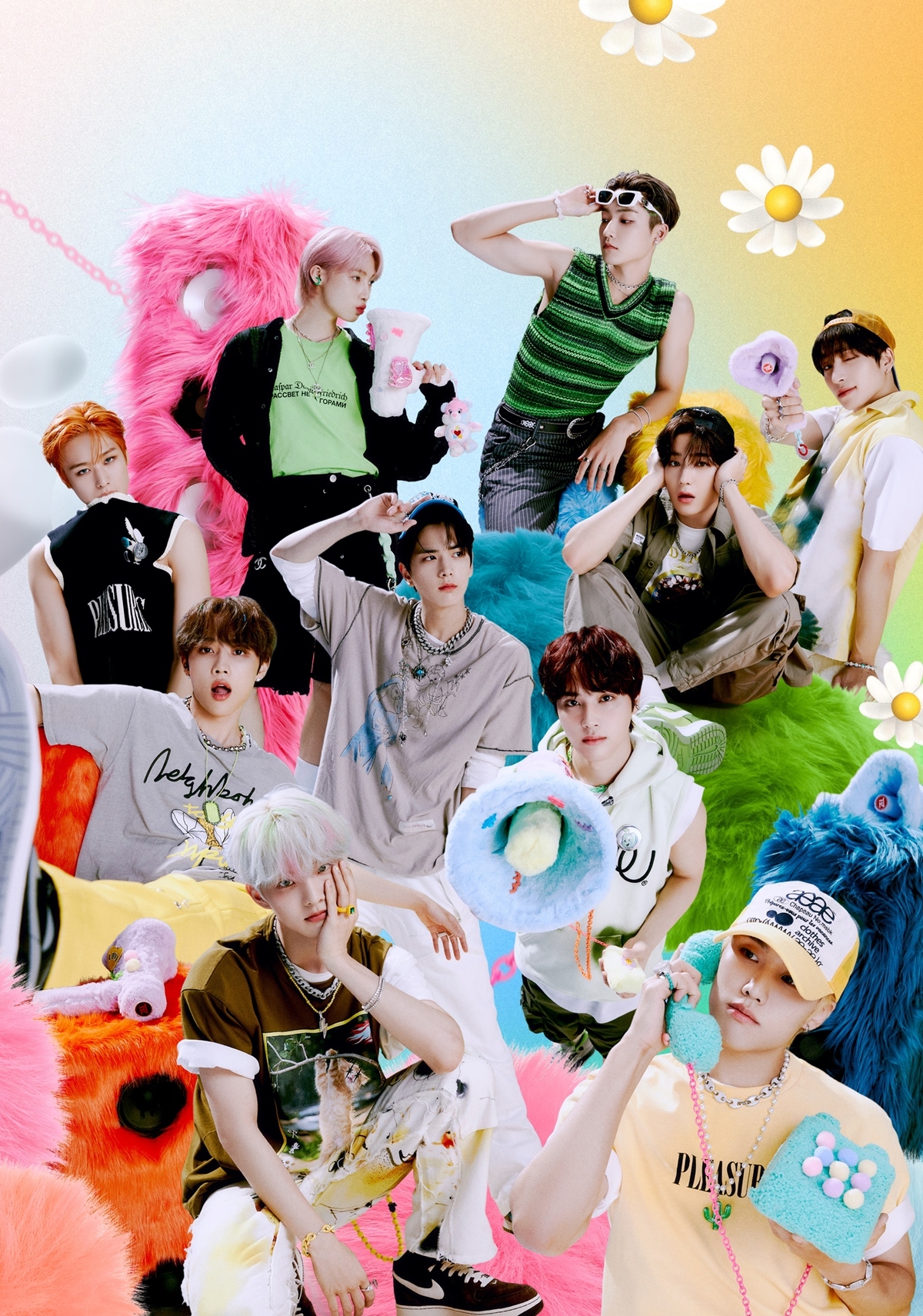 Group image for the Boyz’ seventh EP “Be Aware” (IST Entertainment)
The band recently closed the curtains on its “The Boyz World Tour: The B-Zone,” its first global concert series since debuting in December 2017. Kicking off the tour in Los Angeles on May 29, the act traveled to 11 cities in the US, Europe and Asia, with the last concerts taking place on Aug. 5-7 at the KSPO Dome in Seoul. The three-day finale in Seoul attracted 24,000 concertgoers in total.

Looking back at the concerts, the band relived the excitement as if it were yesterday.

“If we’d been touched by the foreign fans singing along to the Korean lyrics, the fans at the Seoul concerts kept up the tension and sent us endless cheers throughout,” Kevin said. “I don’t think I’ll be able to forget the ‘Giddy Up’ performance when we all jumped up and down and played together.”

The band now hopes to come out on top with a TV music show No. 1 from the new album.

“Although our biggest happiness comes from the Bs being satisfied from the album, our extra goal with the album would be another No. 1 on the music shows so that the Boyz and the Bs will be able to congratulate each other and cherish the happy moment together,” Q said.

In closing the statement, Juhaknyeon said, “We’re sincerely grateful for everyone supporting us. The album is like a gift for those people who support and love us, and we hope many will like and cheer for our new songs in ‘Be Aware.’”