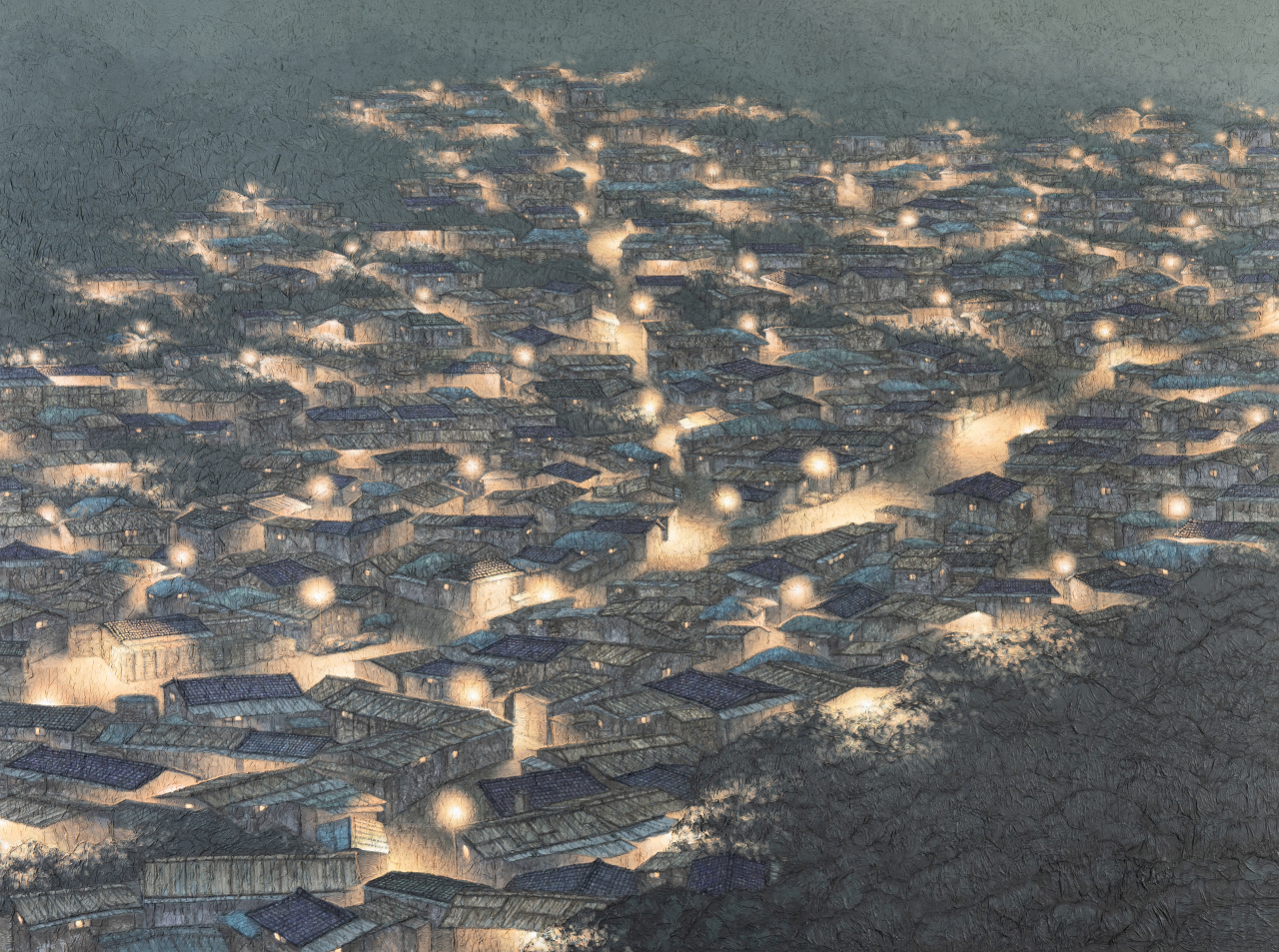 “Another World” by Joung Young-ju (Hakgojae Gallery)
Seen from a distance, Korean painter Joung Young-ju’s “Another World” shows a scene of dim lights glowing throughout a village on a hillside at night. The lights are coming from houses and streetlamps in the neighborhood. The 1.9-meter painting at the entrance of the exhibition of the same name evokes childhood memories or tales many visitors have heard from their parents.

A neighborhood built on a hillside is commonly referred to as “dal dongnae,” literally meaning “moon village” in Korean. The term describes a small town that is close to the moon because it is located high up on a mountainside. Many of these villages were formed during the government-led rapid industrialization in the 1960s and 1970s, forcing people who were not able to afford to live in the developed areas where apartments were built to move to hilly neighborhoods. 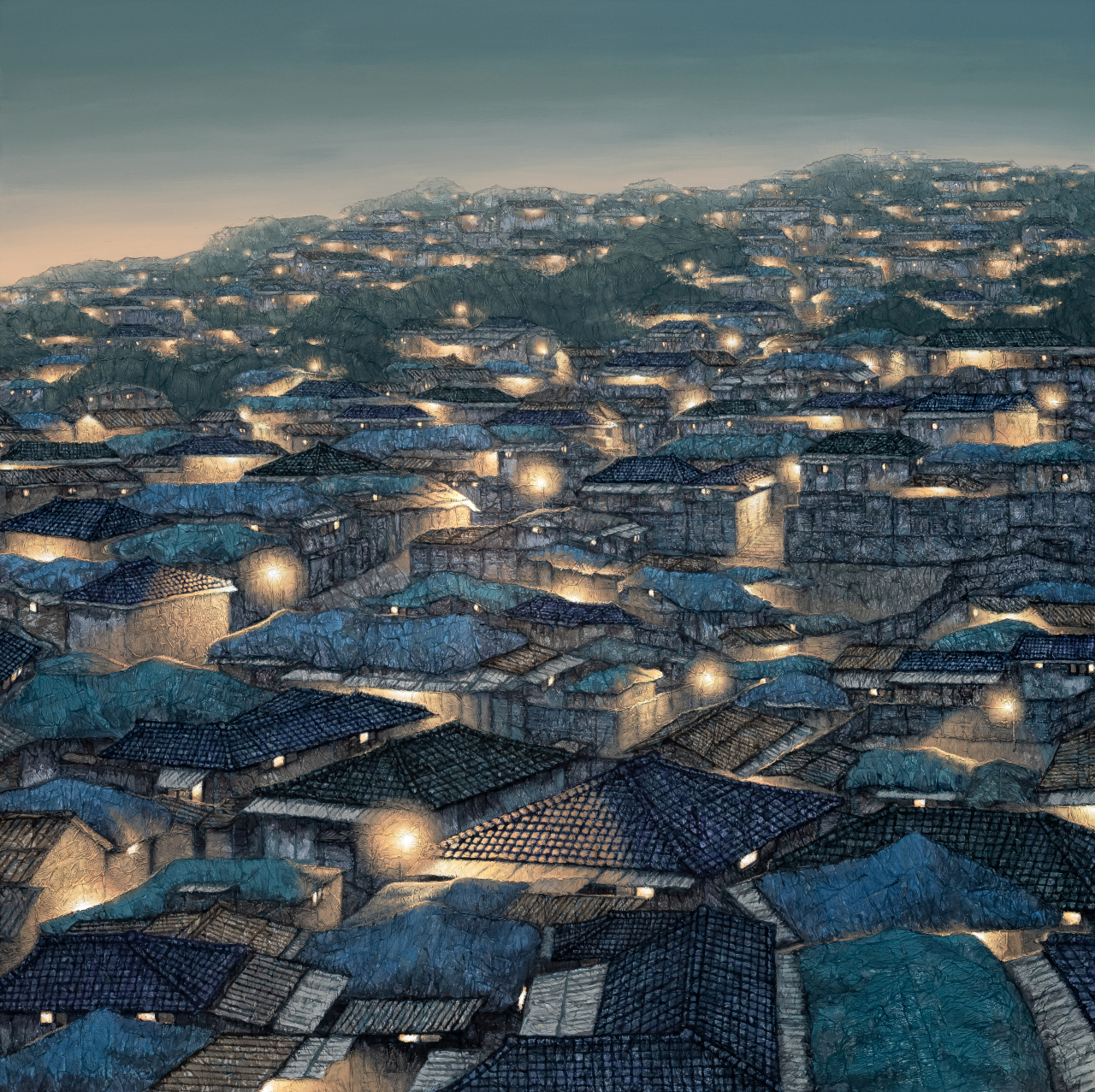 "Disappearing Hometowns 209” by Joung Young-ju (Hakgojae Gallery)
Dal dongnae have disappeared gradually over time, but some remain across the country; it could easily be translated to shanty town, but dal dongnae in South Korea have their own sentiment that brings out nostalgia from older generations. Joung, 52, has stuck to the theme of dal dongnae for 14 years, drawing from her memories living in a similar village in Busan with her family when she was a child.

“I wish my paintings could offer comfort, just like the moment when people visit their hometown, a place that always welcomes an exhausted soul,” Joung said. She used papier colle -- a French phrase for glued paper -- technique, a type of collage in which paper is adhered to a flat surface such as a canvas. She created each house by crumpling “hanji,” or Korean mulberry paper, and attached it to a canvas. She then applied acrylic paint over the work. 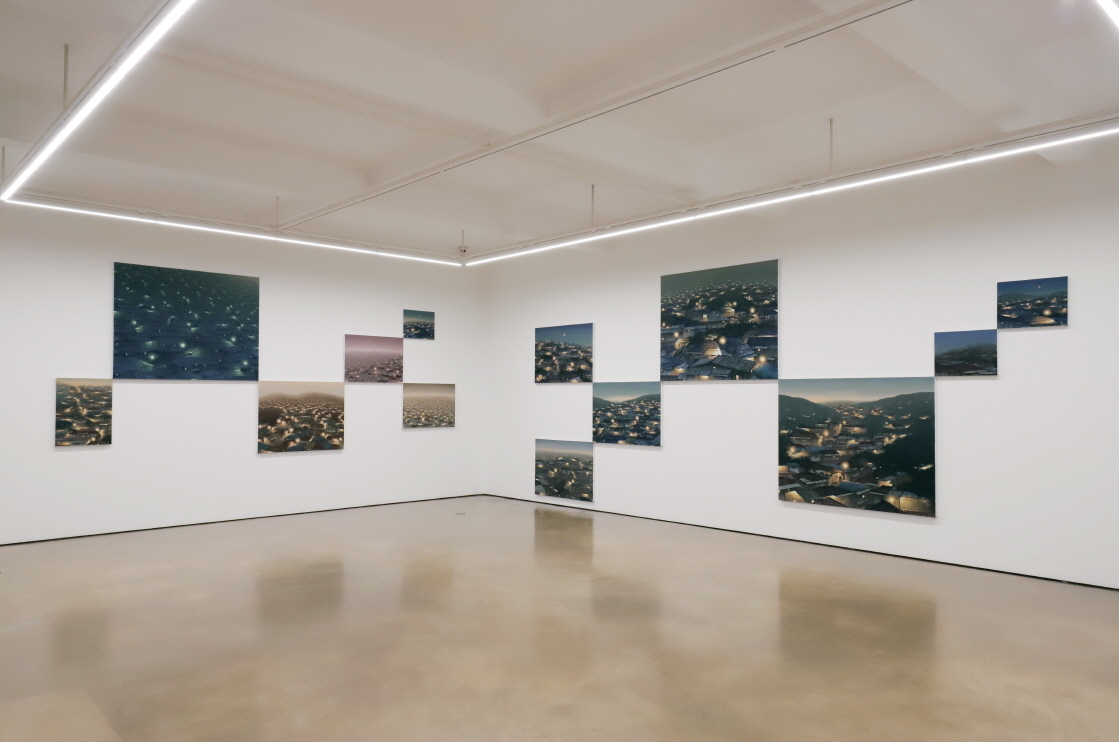 Joung returned to South Korea from the US after the Asian financial crisis in 1997 due to financial difficulties, which was the beginning of a journey of struggles for the artist.

The exhibition “Another World” shows 28 of Joung’s paintings that were inspired by dal dongnae. The exhibition runs through Aug. 21 at Hakgojae Gallery in Seoul.