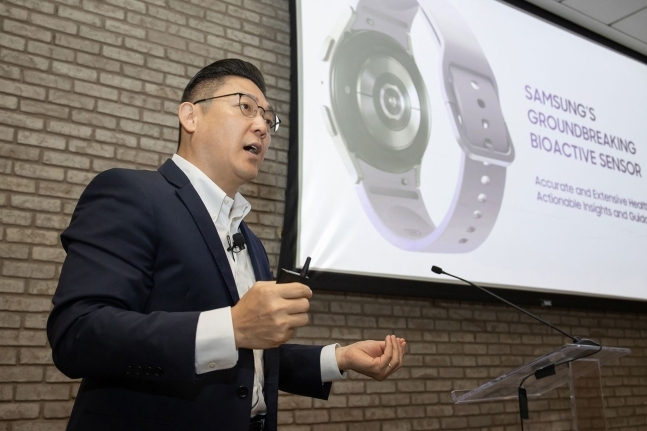 “Galaxy Watch5 is loaded with various technologies including an innovative bioactive sensor that can measure biometrics to help (users) stay healthy. Galaxy Watch5 will be the best partner for keeping healthy habits and sleep patterns,” said Yang, who is the head of health research and development part under the company’s mobile experience unit.

Regarding sleep technology research, Yang said the company is working with the US’ National Sleep Foundation as well as laboratories at UC San Diego and UC San Francisco to utilize relevant data for clinical trials.

According to Samsung Electronics, Galaxy Watch5 has been equipped with a new temperature sensor that uses infrared technology for more accurate readings.

“We are reviewing and developing various functions with the new addition of the contactless temperature sensor on Galaxy Watch5. It could be used in many areas such as measuring body skin temperatures, sleep and exercise tracking as well as health care,” Yang said.

Mentioning that Galaxy Watch has focused on wellness so far, Yang said smart watches in the future will be used in many areas such as medical institutions turning to smart watches for the monitoring of patients and digital treatments.

Yang laid out the three pillars -- innovation, connectivity and cooperation -- as the direction for Samsung Electronics’ health business.

“Samsung’s DNA is technology. We will continuously invest in technology to stay ahead. We are also pursuing connectivity with Samsung’s home appliances,” he said. “Samsung takes collaboration with partners very seriously. We will create an open ecosystem with partnering companies so that consumers can receive more value.”