BEIJING, Aug. 11, 2022 /PRNewswire/ -- About 78.34 percent of respondents from 22 countries believe the Chinese economy has become the engine of the world economy, according to a joint survey conducted by CGTN Think Tank and the Chinese Institute of Public Opinion at Renmin University of China.

The survey has interviewed respondents who are 38.64 years old on average from developed countries such as the U.S., UK, Australia, Japan, as well as developing countries like Brazil, India, United Arab Emirates, and South Africa.

Over half of the respondents have higher education, with 54.71 percent having a bachelor's degree or above, of which 15.22 percent are masters and doctors. In terms of future expectations, 76.23 percent of respondents expect that China will play a crucial role in promoting global economic development.

Only 6.31 percent of respondents to the survey believe the world will be unipolar in the future and dominated by the U.S., while 34.55 percent, the largest group, think a multipolar world is the most likely prospect. 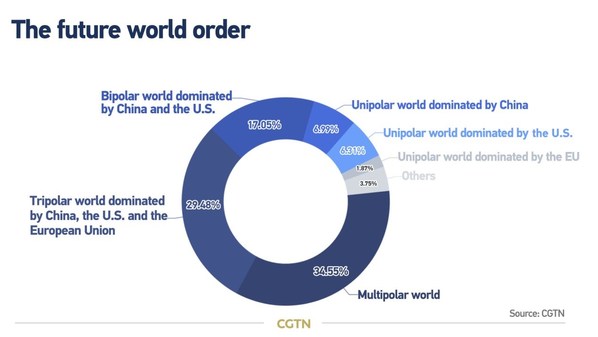 Some 56 percent from both developed and emerging economies say the real reason Western politicians promote "the China Threat" is due to their "stress and anxiety" over China's rise.

The Chinese concept of "a community with a shared future," which emphasizes humankind as a whole and seeks a new path to avoid confrontation, is supported by 61.29 percent of those surveyed.

In terms of China's rapid technology development, respondents are most impressed by its 5G development, artificial intelligence and high-speed railway.

There are nearly 100 million rural poor people in China who have been lifted out of poverty in the past decade, and the vast majority of respondents believe top two reasons are that China's economy maintains rapid growth and that Chinese leaders are determined and firmly marching toward their goals.

According to the survey, a majority approve of China's approach to human rights, and 57.36 percent of the people surveyed agree with the statement "China always treats human rights realistically and practically."