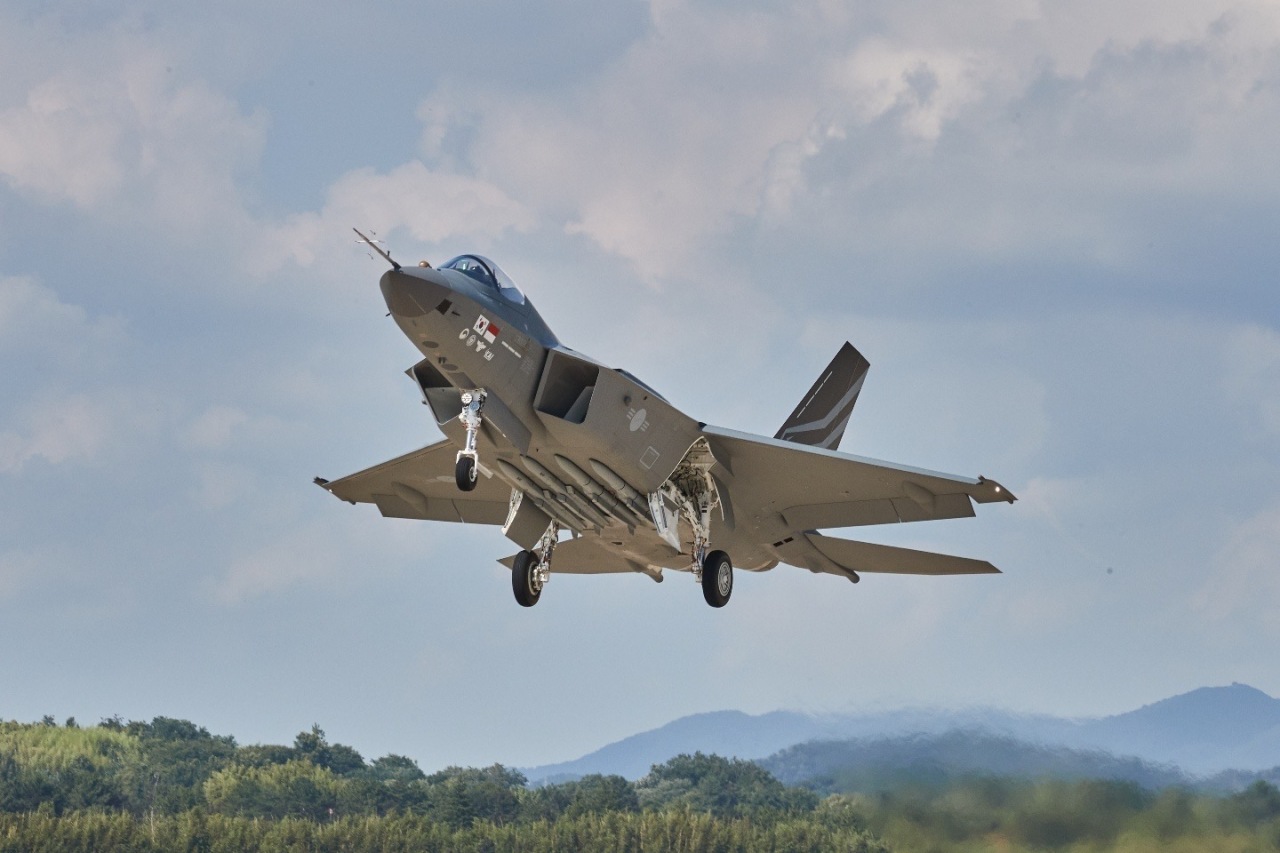 South Korea’s first homegrown KF-21 fighter takes off for its inaugural test flight on July 19 at the base of South Korea’s Air Force 3rd Training Wing in the city of Sacheon, South Gyeongsang Province. (Defense Acquisition Program Administration)
South Korea’s first independently developed fighter jet soared into the sky in July, making a huge leap forward in the aerospace and defense industry. But the giant step took nearly 20 years, after the South Korean military decided to develop the indigenous advanced fighter aircraft in 2002.

Jung, who played a vital role by heading the KF-21 project for six years, also envisioned the future of the KF-21, underlining that South Korea should move quickly to adapt to a rapidly evolving battlefield environment.

Jung served as the first director general for the KF-X Program Group at the Defense Acquisition Program Administration from 2016 to January 2022. Last year, then-DAPA Minister Kang Eun-ho reportedly asked to internally review designating the No. 2 KF-21 prototype as Jung Kwang-sun.

Long haul
The KF-21 program began from then-President Kim Dae-jung’s proposal in 2001 to locally develop advanced fighter jets by 2015 at the latest. Then, South Korea’s Joint Chiefs of Staff confirmed a long-term plan to develop indigenous fighter jets in 2002.

But the green light for the project only came in 2014, after seven internal assessments of the project feasibility. The KF-21 program, known as the KF-X project, is South Korea’s largest-ever defense project, with a total budget of 8.8 trillion won ($6.7 billion).

After turning the corner, the project was entangled in another ordeal. In 2015, the United States refused to transfer the key technology to establish avionics systems including an active electronically scanned array radar (AESA radar).

In particular, the state-run Agency for Defense Development and Hanwha Systems managed to produce a prototype of an AESA radar, which is analogous to an eye in the human body and a key component of fighter jets, in 2020 after the four-year trial. South Korea has become the 12th country that has locally developed an AESA radar without any technology transfer.

“But the biggest difficulty that engineers faced was that they did not even know how to measure the performance of equipment they developed,” Jung said. “Unlike engineering logic and mathematical formulas, it seemed to me that they were unable to find how to test an AESA radar in research papers.” 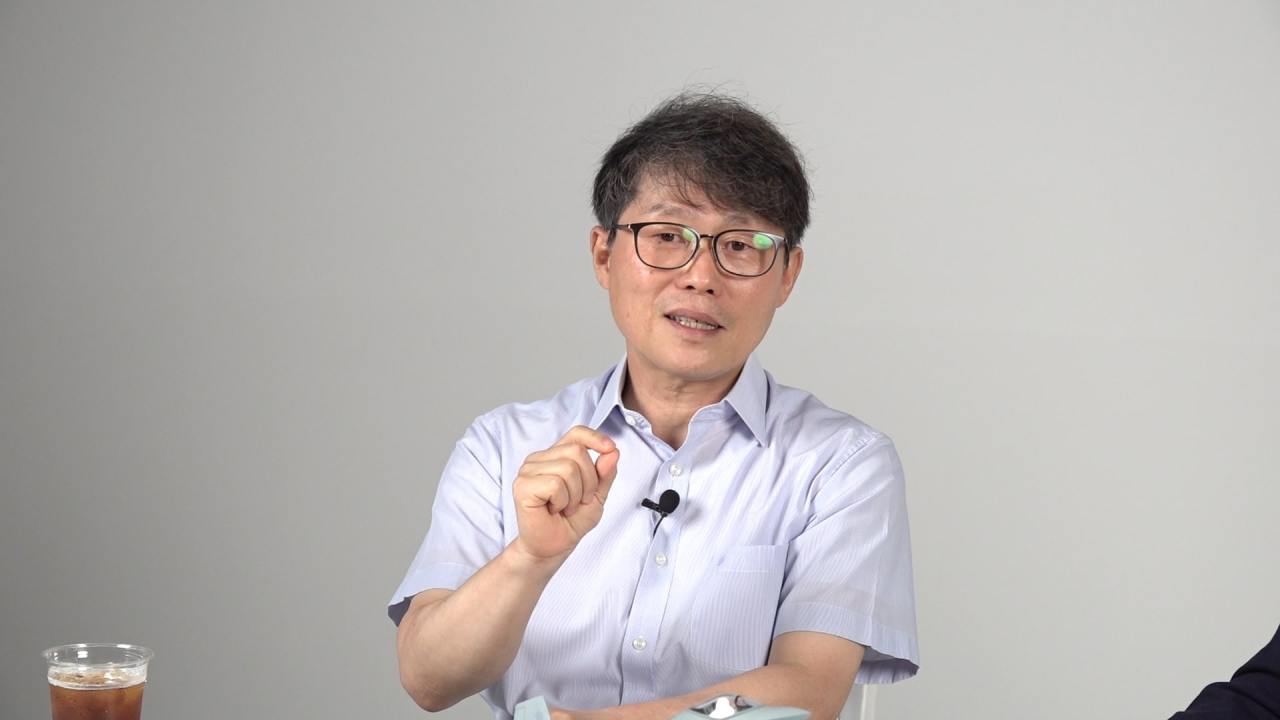 Retired Brig. Gen. Jung Kwang-sun speaks to The Herald Corp.(Herald Corp.)
Hard but worth it
Despite the successful first flight, there is still a long way to go. South Korea just began a long journey of 2,220 test flights that will run until 2026.

“We should not be overly excited about the first successful test flight. We should get back to basics and prepare for the huge difficulties that we are likely to encounter as we conduct test flights,” Jung said.

KF-21 fighter prototypes should also pass an interim test to assess and measure their operational suitability for combat in 2023 to begin mass production in 2024.

The final, full-scale assessment of the operational effectiveness and suitability of the KF-21 will be carried out in 2026, when the first stage of the KF-21 development project is expected to be finished.

The KF-X program consists of two stages over 13 years, from 2015 to 2028. The first stage focuses on developing aircraft and integrated logistics systems between 2015 and 2026. The second phase aims to develop aircraft capabilities to carry out air-to-surface missions between 2026 and 2028. Korea Aerospace Industries aims to deliver 120 KF-21 fighter jets to South Korea’s Air Force by 2032.

The main goals of the project are to replace F-4s and F-5s -- obsolete fighter jets operated by South Korea’s Air Force for more than 30 years -- and to independently develop next-generation fighter jets with capabilities required for future battlefields.

Bid to sell fighter jets
Jung is also bullish about exporting 4.5-generation KF-21 fighter jets despite widespread skepticism. Jung said that countries, which need to choose between upgrading and replacing the F-16 Fighting Falcon fighter jets, could be potential buyers. The F-16 multirole fighter aircraft entered service in 1978 and is increasingly considered obsolete.

“The demand will give a bright outlook for exports,” Jung said, adding that the KF-21 Boramae fighter jet will offer an affordable and cost-effective alternative to the F-16.

“Customers will prefer cost-effective fighter jets that can carry more or larger weapons and have a lower RCS (radar cross-section),” Jung added, referring to the KF-21’s strengths. F-35 and F-22 stealth fighters have a small RCS.

Jung explained the cost of the KF-21 fighter jet and its operation and maintenance appropriations would be lower than other 4.5-generation fighter jets such as the French-made Le Rafale and Eurofighter Typhoon.

Should South Korea begin mass producing KF-21 fighter jets to supply them to the Air Force, its unit price would also go down.

Jung suggested that South Korea could target countries with purchasing power, which are unable to acquire advanced fighter jets such as F-35 stealth fighter jets from the US for various reasons including their relations with the US.

A total of 13 countries, except for the US, have procured and operated the F-35. The seven countries out of 13 -- which comprise Australia, Canada, Denmark, Italy, Netherlands, Norway and the United Kingdom -- are international program partners that funded the F-35 program. Only six foreign countries -- which are South Korea, Belgium, Israel, Japan, Poland and Singapore -- have purchased the stealth fighters, according to Lockheed Martin.

Jung also pointed out that most of the customer countries would need to acquire fighter jets to enhance military readiness not against existential threats but potential threats. Therefore, the KF-21 would be sufficient to meet their requirements. 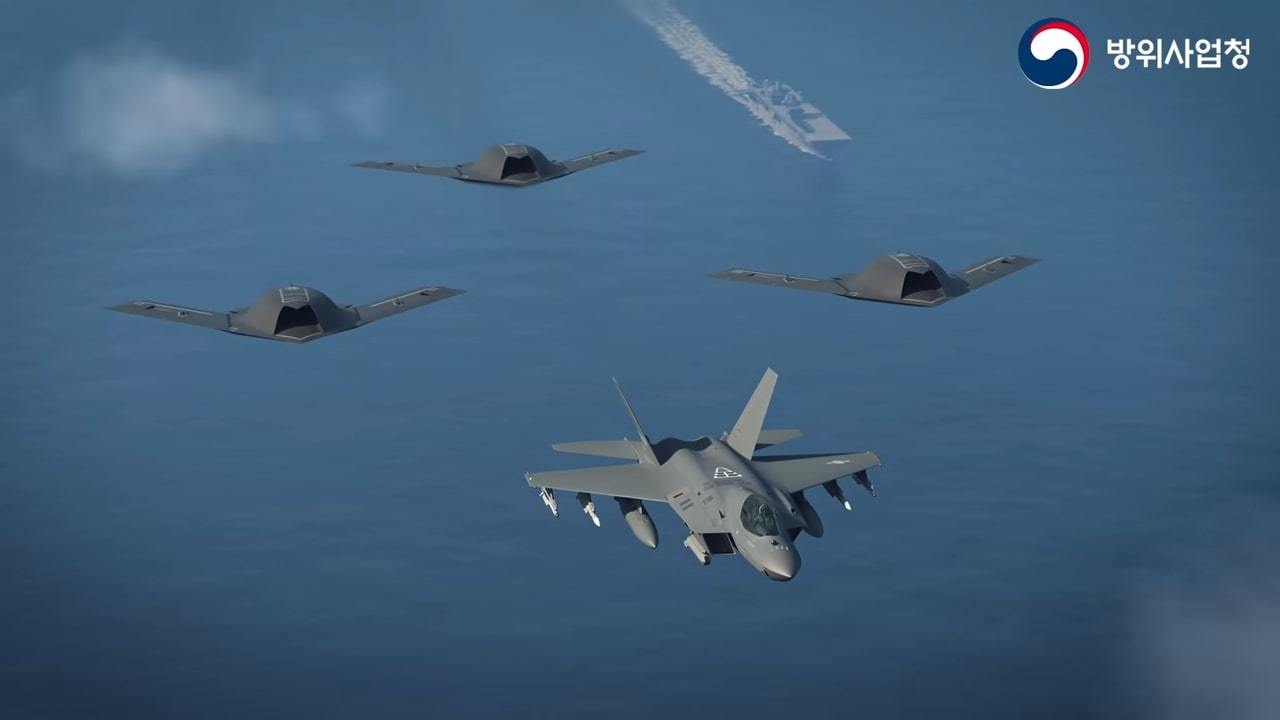 The KF-21 program has also paved the way for South Korea to independently develop more advanced aircraft such as fifth- and sixth-generation fighter jets.

The KF-21 fighter jet doesn’t have stealth capabilities, but it is similar in appearance to Lockheed Martin’s F-22 Raptor stealth fighter. The KF-21 also has an internal weapon bay which makes it easier for South Korea to upgrade the KF-21 to a fifth-generation fighter jet.

But Jung said South Korea will not necessarily develop fifth-generation stealth fighters. Instead, South Korea should play to its strengths such as its progress in drone technologies.

During the interview, Jung envisioned upgrading the KF-21 fighter jet to command and control aircraft, which can team up with unmanned air vehicles and implement a shared objective in concert.

“We can seek to develop unmanned combat aerial vehicles with stealth capabilities and assign them to conduct reconnaissance and launch attacks flying ahead,” he said, adding South Korea could try to remodel the two-seater KF-21 fighter jet with AI-enabled sensors to enhance pilot situational awareness. “In that case, we do not necessarily upgrade the KF-21 to a stealth fighter jet.”

This would not be the first such combination. Korea Aerospace Industries has set a goal of developing a new manned-unmanned-teaming (MUM-T) system between 2021 and 2022.

Shed old skin
Jung underscored that South Korea’s defense contractors “should shed their old skin” and shift from a complacent approach to becoming fast movers in the aerospace and defense industry.

“Our mindset and business practices still hang onto the past as we undertake the project of manufacturing fighter jets for a long interval after the development of T-50,” he said. The T-50 is a training jet developed in conjunction with Lockheed Martin, and an upgraded version is also sold as a light fighter.

He added that defense contractors still adhere to the way of only preparing for a new project after completely finalizing an existing project.

“In that way, we will not be able to become a fast mover. We will remain as a follower.”

Jung urged South Korea to now devise plans to upgrade and refurbish the fighter jet, envisioning the future of the KF-21. For instance, South Korea could concurrently implement a new project to build a fighter demonstrator capable of internally carrying weapons and missiles while mass-producing KF-21 fighter aircraft.

“What I’d like to underscore is that we don’t have to follow the same path as that of the US,” Jung said. In the US, the development of the fifth-generation aircraft precedes plans for building manned-unmanned teaming systems.

“I think it is significant for us to adapt to rapid changes and come up with ways to efficiently utilize our existing technology on the battlefield rather than making a scene about developing stealth fighters and sixth-generation fighter jets.”