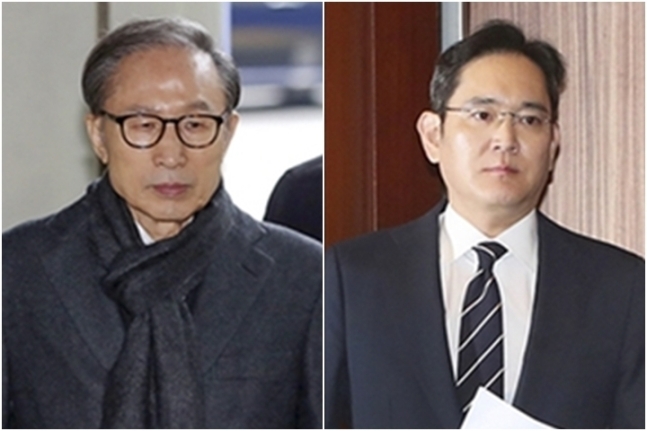 Yoon has hinted at a possible pardon for former Lee since taking office. In early June, he told reporters during a morning press briefing that it is “not right” for Lee to serve 20-something years in prison “in light of past precedents.”

However, it was reported on Thursday that Lee was not included in the list of Liberation Day pardons reviewed by the Ministry of Justice. Justice Minister Han Dong-hoon reportedly opposed pardoning Lee.

Politicians of the ruling and opposition parties, such as former South Gyeongsang Province Governor Kim Kyung-soo and former Finance Minister Choi Kyung-hwan, are also to be excluded.

In a survey conducted by polling agencies Embrain Public, Kstat Research, Korea Research and Hankook Research from July 25 to 27, 39 percent of the respondents were in favor of Lee’s pardon, and 56 percent were in opposition.

In this situation, pushing ahead with the pardon of politicians could have a further negative impact on his low approval rating, which is already below 30 percent.

As for business figures, Samsung Electronics Vice Chairman Lee Jae-yong and other heads of conglomerates and offenders related to livelihoods are said to have been included in the list of pardons.

The government will hold an extraordinary Cabinet meeting on Friday to announce the pardon list for Liberation Day.

Regarding excluding politicians from pardons, Daegu Mayor Hong Joon-pyo expressed regret, saying Yoon should forgive everyone and go on the road to greater national unity on his Facebook account on Wednesday. The opposition Democratic Party calls for the pardon of former South Gyeongsang Province Governor Kim Kyung-soo, an aide of former President Moon Jae-in, on the grounds of “national unity.”