Despite him busily visiting scenes of damage in between holding disaster response meetings, the public‘s attention has been directed to what he said more than a year ago.

“Gangnam Station had been subject to flash floods in case of torrential rain. ... But, residents in the area need not worry,” the mayor had said, visiting the construction site of a new anti-flood tunnel in Seocho-gu.

This tunnel, completed last month, is designed to channel rainwater in the areas near Nambu Bus Terminal to be drained directly to a nearby stream, which in theory, would prevent flooding.

With the tunnel capable of handling up to 85 millimeters of rain per hour, Gangnam is now safe from a “once in 20 years” rain event, Oh declared at the time.

On Monday, Seoul’s southern regions, including Gangnam-gu and Seocho-gu, were hit by over 100 milliliters of rain an hour at one point, making the city‘s contingency plans obsolete.

To make matters worse, it was revealed Tuesday that the city’s budget related to flood and maintenance of sewage treatment facilities had been cut by 18 percent this year when compared to the year before. 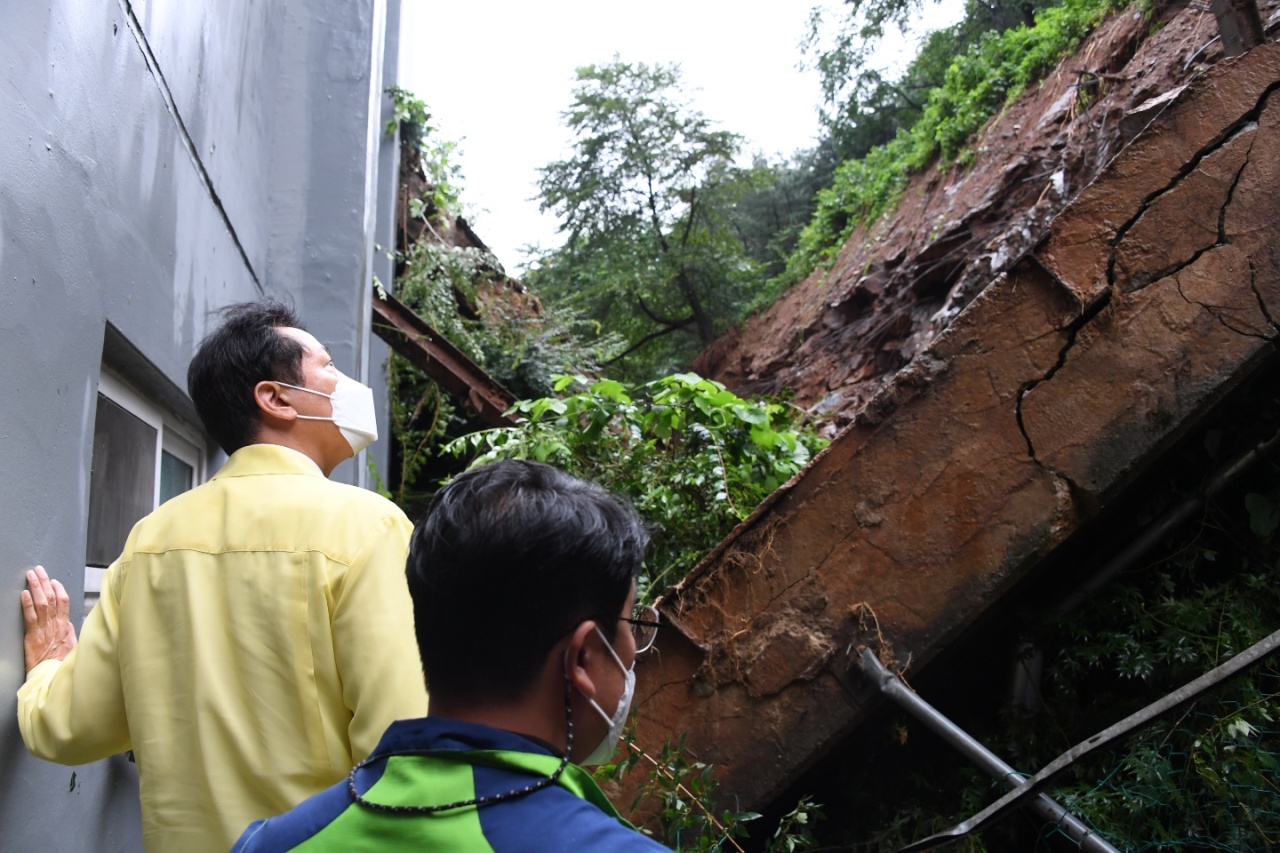 ‘Oseidon’ and a recurring nightmare


This is the second time Oh has experienced a significant flooding of the nation‘s capital during his tenure, leaving the public to debate how much blame is to fall on the mayor, who has earned the unflattering nickname “Oseidon” for the flood-related fiasco in the early 2010s.

Back in September 2010, when Oh had just been re-elected as the mayor, the area around Gwanghwamun Plaza in Jung-gu, central Seoul, was completely flooded.

Things got even worse in the summer of the following year when the country’s central region was hit by heavy rain, which left 69 dead and eight missing. Among the dead were the 16 citizens killed by a landslide at Umyeonsan Mountain in Seocho-gu.

Following the tragedy, Oh received flak for slashing the city‘s anti-disaster budgets to one-tenth of the previous level during his five-year tenure.

The “Oseidon” name, likening the mayor to Poseidon, the Greek god of the ocean, started as a joke poking fun at Oh’s misfortune of being in office every time Seoul suffered the worst floods. He has mentioned it publicly, showing that he is well aware of his nickname. 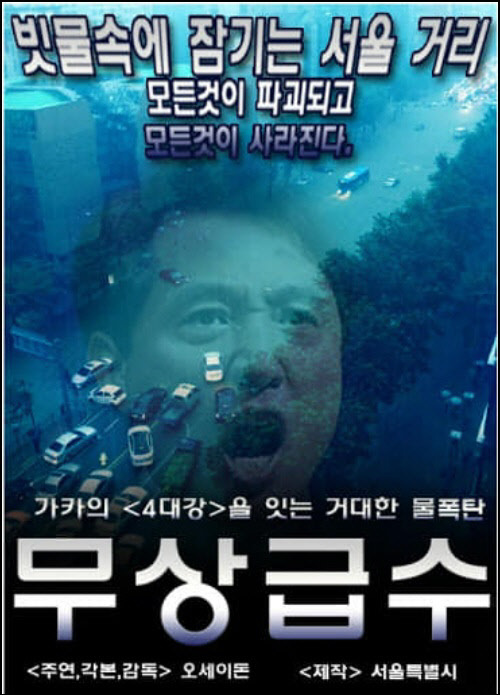 This parody image made by an unknown internet user depicts Mayor Oh Se-hoon as the star of a fictional movie, mentioning his depreciative nickname “Oseidon.”


According to the Seoul Metropolitan Government, Seoul has cut 46.7 billion won ($35.7 million) from the sewage facilities budget and a further 42.9 billion won from the flood control and maintenance of the city‘s streams and rivers budget. Facilities at sewage treatment centers are vital since major cities use sewage treatment facilities to drain massive bodies of water in case of floods.

In total, Seoul has allocated 420.2 billion won for these projects, compared to the 509.8 billion the year before.

The city government attempted to deflect criticism by saying the budgets have been declining since 2020 -- when Oh’s predecessor, Park Won-soon, was in office -- when most of the big-budget projects were being wrapped up. In addition, Seoul said it was the city council, which at that time was controlled by the main opposition Democratic Party, Oh‘s rival party, which cut the flood-related budget by 24.8 billion won, and Seoul actually added 29.2 billion won.

But a 2021 report issued by the Seoul city council shows that the city government had already sliced the flood-related funds before the council got its hands on it. In short, Seoul slashed the budget, and the city council cut it further.

Twitter user @_mint_flavored suggested that Oh is responsible on some level, at least for the floods. “Oh Se-hoon being called ’Oseidon‘ is not just a coincidence. It is because he actually provided reasons for flooding. Cutting budgets, switching the blocks on the sidewalks for his ’Design Seoul‘ so the water would fill up,” read a tweet that garnered 3,767 likes and 13,300 retweets as of Wednesday.

Ironically, the situation was predicted by experts almost a year before the chaos rained down on the country’s central region. In a report commissioned by the Seoul City Council, researchers analyzed the Seoul budget for 2022 and warned of the potential effects of cuts, particularly one related to the sewage treatment plants.

They pointed out that Seoul‘s initial plans would cut the budget for the Seoul Water Recycling Corporation, the city-run company in charge of Seoul’s sewage treatment plants. This would affect the maintenance, replacement and repairing of the deteriorated facilities.

“If the deteriorated facilities and equipment are not appropriately repaired and improved due to budget problems, there will be serious problems for the safety of citizens. (The city) must ensure that the budget cuts do not restrict the ongoing projects,” the report read.