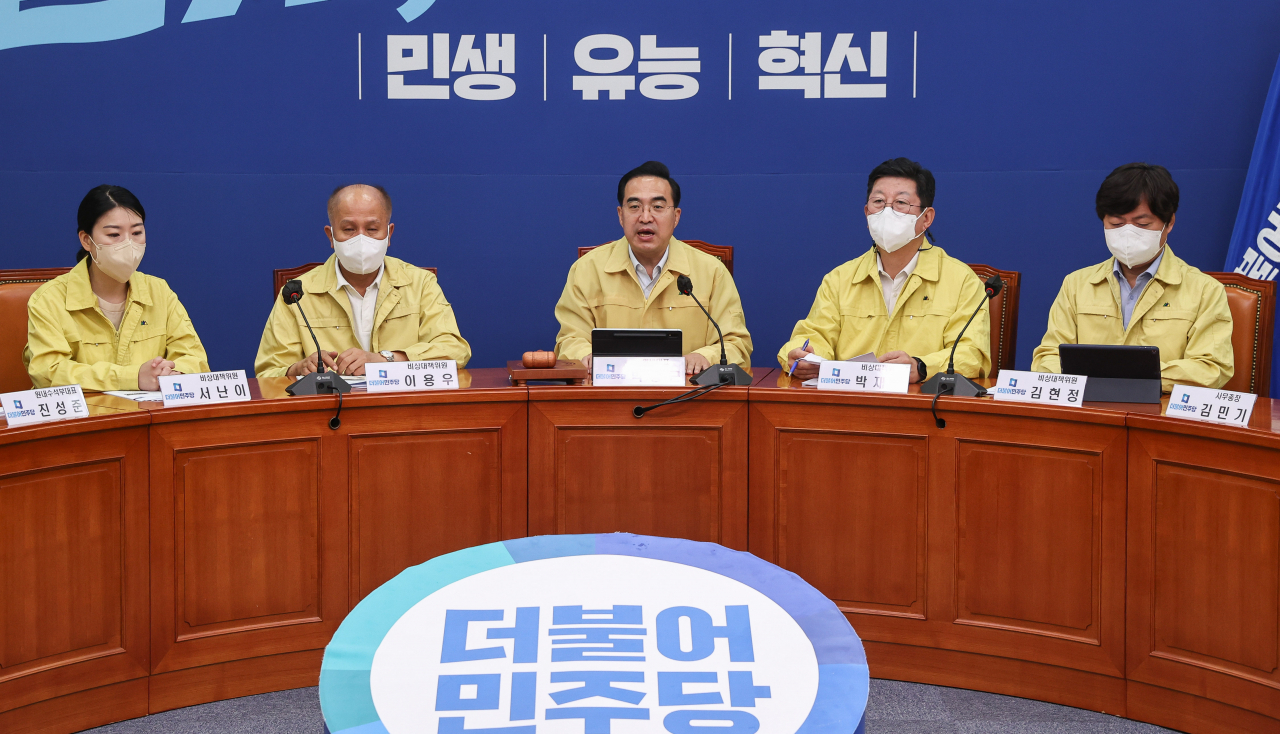 Rep. Park Hong-keun, floor leader of the main opposition Democratic Party, speaks at a party meeting at the National Assembly on Wednesday. (Yonhap)

The main opposition Democratic Party rapped President Yoon Suk-yeol on Wednesday for remaining at home when massive rainfall caused serious flooding in Seoul and elsewhere earlier this week, moking him as an invisible "stealth" jet.

Presidential aides have said that Yoon oversaw anti-disaster efforts from home via telephone when record downpours, believed to be the heaviest in 115 years, triggered widespread flooding in southern Seoul on Monday night.

But critics, including the DP, have stressed that Yoon should have shown up at the disaster control center, instead of staying at home, to better direct efforts to bring the situation under control in the downpurs that left 16 people dead or missing.

"The president was nowhere to be seen in the pandemonium," DP floor leader Park Hong-keun told a party meeting. "This means that while the people were exposed to danger all night long, the country's crisis management control tower was not functioning.

"The president said he responded to the crisis by phone without showing up, but is the president some kind of stealth fighter?" Park mocked, referring Yoon's absence to the aircraft designed to avoid detection.

Citing the reaction on social media that compared the country to a state of anarchy during the heavy rains, Park called on the Yoon administration to beef up its crisis management system going forward.

Yoon's office has said that the president was briefed on and responded to the flood flash in real time and that the decision to stay at home was made to minimize the involvement of security and protocol officials in the emergency situation.

A total of 525 millimeters of rain fell in Seoul from Monday to Wednesday morning, inundating more than 2,500 homes and buildings in the capital and elsewhere in the central and eastern regions. The three days of downpours also shut down highways and railroads, temporarily suspending subway operations. (Yonhap)