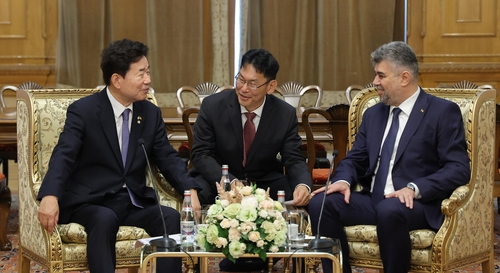 National Assembly Speaker Kim Jin-pyo (L) speaks with Ion-Marcel Ciolacu, president of the Romanian House of Deputies, during their meeting in Bucharest on Tuesday, in this photo released by Kim's office. (Yonhap)

Kim held talks with Ion-Marcel Ciolacu, president of the Romanian House of Deputies, in Bucharest on Tuesday (local time). Romania is the second leg of a two-nation trip that has also taken him to Poland.

Kim proposed that South Korea and the United States take part in an 11 trillion-won ($8 billion) project to modernize and build nuclear reactors in Romania, while Ciolacu asked for cooperation in the health sector.

Kim also asked for Romania's support for South Korea's bid to host the 2030 World Expo in the southeastern port city of Busan. Ciolacu responded that he believes Romania will support South Korea in the competition and will push for an official announcement soon. (Yonhap)