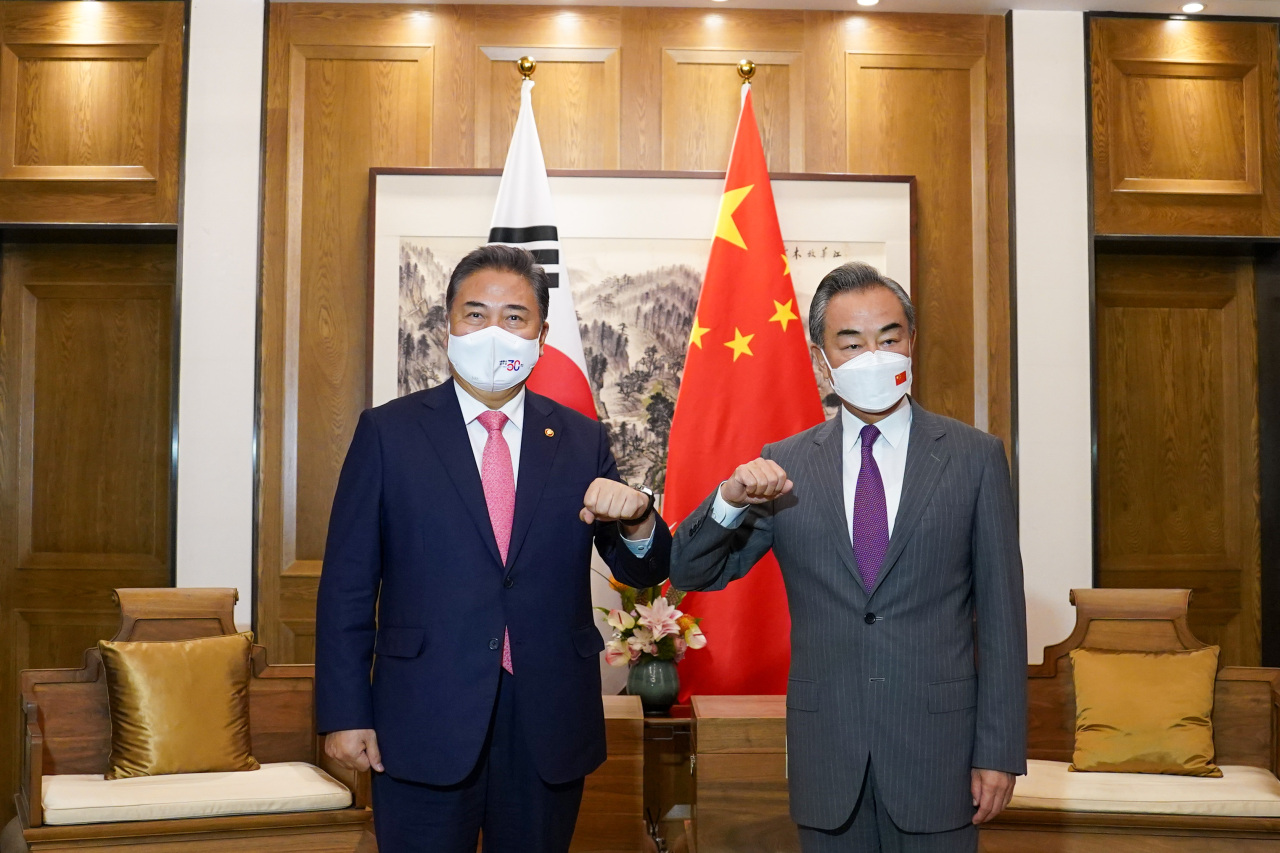 In their second bilateral meeting held in Qingdao, Shandong Province, on Tuesday afternoon, the two sides agreed to further enhance bilateral ties. While the meeting was conducted in an “amicable” mood, the top diplomats also exchanged messages of concern.

“As a ‘global pivotal state’ contributing to freedom, peace and prosperity, South Korea will promote the spirit of Hwaeebudong (to pursue harmony but not to become the same), while pursuing national interest and principles,” Park said, using a four-character idiom.

Park also asked China to play a “constructive role” to lead North Korea away from provocations, and into dialogue for denuclearization.

Wang underscored the importance of keeping “independence and self-reliance” for the two countries, in an apparent reference to recent US-China friction, including that regarding Taiwan.

“For the next 30 years, China and Korea should adhere to independence defense capability and not be influenced by external obstacles,” Wang said in his opening speech.

“(The two countries) should pursue a ‘win-win’ approach to secure stable and a smooth-running supply and industrial chain. The countries should pursue equality and respect and not interfere with each other’s domestic affairs.”

Their bilateral meeting, which kicked off at 4 p.m. lasted for 110 minutes.

The South Korean foreign minister arrived in Qingdao, Shandong Province on Monday, kicking off his first official trip to the neighboring country that will last for three days.

The trip was arranged at Wang’s invitation, at a time when Seoul’s new administration is trying to navigate intensifying Beijing-Washington competition, with thorny issues regional and international issues escalating.

Before his meeting with Wang, Park held teleconferences with Korean residents and entrepreneurs in China, as well as the foreign ministry’s mission chiefs stationed there on Tuesday.

In the meeting with the Korean residents and entrepreneurs, Park admitted that bilateral relations between Korea and China do face “uneasy challenges,” but said the government seeks to continue to reinforce economic ties with Beijing.

“Strategic competition is escalating between the US and China, the trade order is changing, and the supply chain is being reorganized,” Park said during teleconference.

“I am clearly determined to pursue development of Korea-China relations, based on mutual respect and for the common interest,” the foreign minister said, adding that he seeks to resume operation of negotiation channels between the governments from his China trip.

It is the second time for Park and Wang to hold a one-on-one meeting after they first met on the sidelines of the G-20 Foreign Ministers’ Meeting held in Bali, Indonesia, on July 7. Last week, they also met at the ASEAN Foreign Ministers Meeting in Phnom Penh, Cambodia, but did not hold a bilateral talk there.

As their meeting comes amid heightened military and political tension in the region following US House Speaker Nancy Pelosi’s visit to Taiwan, Park and Wang addressed some of their mutual concerns about regional security.

In recent weeks, China has been raising the intensity of its criticisms against South Korea, as Seoul’s Yoon Suk-yeol administration has set bolstering alliance with the US as its diplomatic priority.

When South Korean President Yoon Suk-yeol did not meet Pelosi during her visit to Seoul last week after traveling to Taiwan, however, China responded by calling the decision a show of “independent diplomacy and rationality toward China.”

“Many people have noticed that during Pelosi’s visit to South Korea after the Taiwan island visit, Yoon and Park (foreign minister) did not meet her. South Korean officials also deliberately avoided discussing the Taiwan question with Pelosi,” Global Times, an English daily associated with the Chinese Communist Party’s flagship newspaper, the People’s Daily, wrote in its editorial on Monday.

“The Chinese society generally regards it as a demonstration of South Korea‘s independent diplomacy and rationality toward China, especially in sharp contrast with Japan. As a result, South Korea has won recognition and respect from Chinese society.”

The daily also raised the issue of Korea’s consideration for additional deployment of the US-made missile defense system, calling it a “major hidden danger” that cannot be avoided in South Korea-China ties.

“We are not against South Korea taking necessary measures to maintain its own security, but they cannot be based on compromising the security interests of China, South Korea’s friendly neighbor.”

The article also said that deploying THAAD is an act of “yielding to US interests” and that Seoul should “never accept a knife handed by its ‘friends.’”

Over South Korea’s possible joining of a semiconductor group spearheaded by the US -- the so-called Chip 4 -- together with Japan and Taiwan, the Chinese daily also reiterated its government’s opposition. South Korean government recently expressed intent to join the preliminary “Chip 4” meeting,

“The country’s (South Korea’s) interests and policy orientation are distinctly different from those of the US and Japan on the Taiwan question, the semiconductor supply chain, and the various US moves that contain China in the Asia-Pacific region,” the editorial said.

“There is enough room for China-South Korea cooperation, as long as Seoul insists on considering issues from the perspective of reality and its long-term interests.”

Before departing for Qingdao on Monday, Park had told reporters that he aims to strengthen strategic communication with China, and hold an “in-depth” discussion on the denuclearization of North Korea, and on security and the economy.