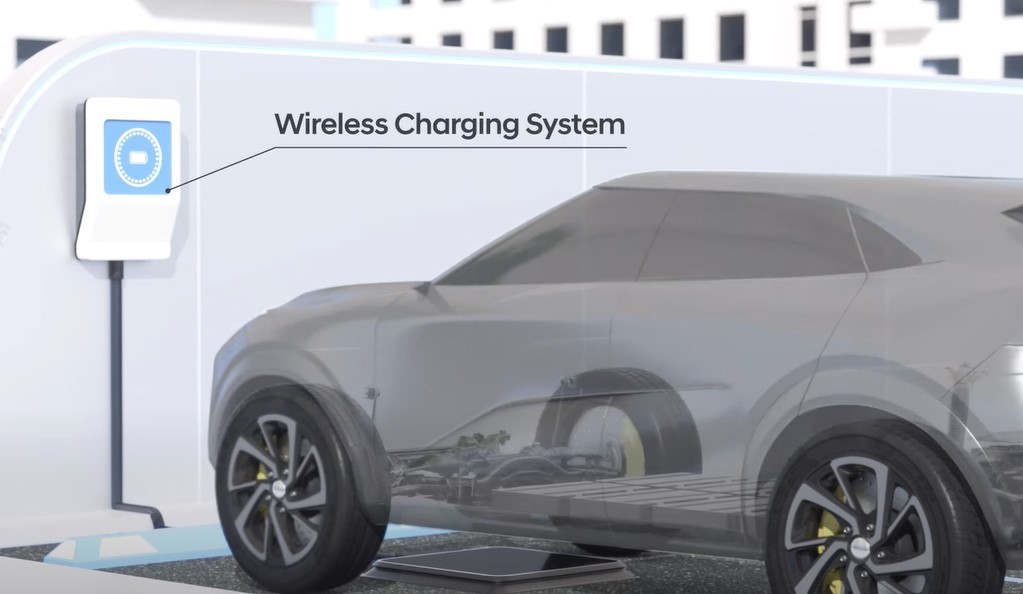 Screen capture of Hyundai Motor Group’s wireless charging system video
The South Korean government will draw up a frequency spectrum plan by the end of this year in efforts to support the growth of new industries such as electric vehicles, robots and urban air mobility, the Ministry of Science and ICT said Tuesday.

“We hope that the government’s preemptive supply of frequency and policy improvements will serve as a foundation for Korea to lead the global market in various new industries, including wireless charging of EVs in times of digital transformation,” Science Minister Lee Jong-ho said during his visit to Hyundai Motorstudio in Goyang, Gyeonggi Province.

The minister visited Hyundai Motor Group’s facility to check on the automaker’s test bed for a wireless charging system for EVs and survey the private sector’s difficulties in developing technologies that require the use of communications frequencies, which are heavily restricted by government regulations.

Hyundai Motor Group’s wireless charging technology was given a green light in September 2021 under the government’s regulatory sandbox initiative that was intended to temporarily ease restrictions in order to support the development of next-generation technologies.

According to the ministry, Hyundai Motor Group explained that the commercialization of its wireless charging system is expected to be difficult due to regulations that require permission for the location of each charger, and asked for support from the government.

The automaker raised the need to allow the use of the 85kHz frequency, which it has been using to test its wireless EV charging technology. New frequencies could also be used in next-generation technologies such as urban air mobility, autonomous driving, digital twin projects, low Earth orbit communication, interactive motion sensing and 6G network.

The Science Minister said that strict management of electromagnetic spectrums is unavoidable, as they can interfere with other frequencies and devices and damage the human body. Lee, however, added that the ministry would consider improving policies in a way that can promote market revitalization while minimizing such concerns.

The ministry previously held a roundtable with industry leaders of information and communication technology at the end of July. Companies including Samsung Electronics, Hanwha Systems, Hyundai Motor Group and Naver Cloud demanded changes in the current frequency restrictions to quickly develop future businesses.