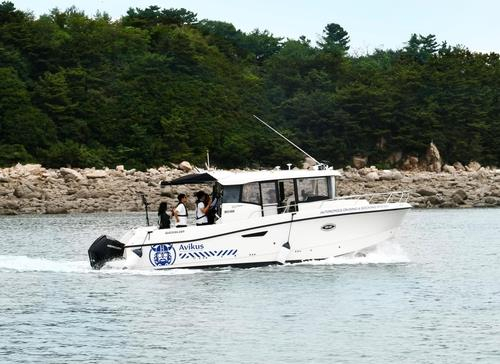 This file photo taken July 12, 2022, and provided by Avikus, a unit of South Korea's leading shipbuilding group, HD Hyundai, shows a leisure boat equipped with its autonomous navigation system at Wangsan Marina in Incheon, around 30 kilometers west of Seoul. (Avikus)

Avikus, a unit of South Korea's leading shipbuilding group, HD Hyundai, said Tuesday it has commercialized its Level 2 autonomous navigation system for the first time in the shipbuilding industry.

Avikus has signed a deal with two domestic firms -- SK Shipping Co. and Sinokor Merchant Marine Co. -- to gradually supply the Level 2 autonomous navigation solution to 23 ships operated by the shippers, the company said in a statement.

The deep learning-based HiNAS 2.0 system will allow a vessel to respond to unexpected situations on its own. Controlling speed, avoiding collisions and minimizing fuel consumption will also be possible in the system, it said.

There are four levels in autonomous navigation technologies approved by the International Maritime Organization (IMO). In the Level 2 technology, crew members need to be on board to intervene in case of an emergency situation.

A Level 3 vessel does not require crew members and the remote-control system is available in case of an emergency. At Level 4, a boat's automated features can navigate under any conditions.

The autonomous navigation system market is currently in its infant stage, and Avikus is aiming to sell the Level 2 system for leisure boats starting next year, the statement said.

To place the Level 3 and Level 4 ships in the market, there must be a revision to current maritime laws, which ban the operation of unmanned ships due to security reasons, the company said.

The autonomous navigation ships and related equipment market is expected to grow by an average rate of 12.6 percent a year to reach $235.7 billion in 2028, according to global market research firm Acute Market Reports.

In June, Avikus conducted the world's first transoceanic voyage of an LNG ship with the Level 2 technology.

The 180,000-cubic-meter LNG carrier sailed half of nearly 20,000 kilometers of the monthlong voyage from Freeport on the southern coast of the Gulf of Mexico to the Boryeong LNG Terminal in South Korea using Avikus' HiNAS 2.0 system.