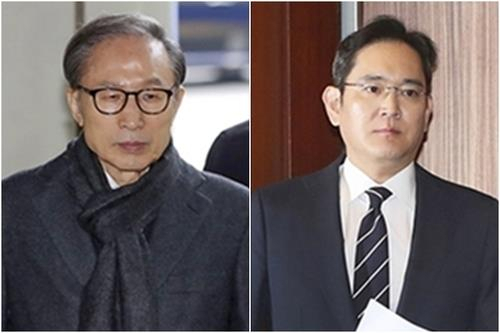 The Justice Ministry on Tuesday reviewed candidates for presidential pardons to be granted on the occasion of next week's Liberation Day amid attention as to whether Samsung heir Lee Jae-yong and former President Lee Myung-bak will be among the beneficiaries.

The ministry's nine-member pardon review board held a meeting to evaluate candidates, including several high-profile business moguls and politicians, for special pardons to be granted in celebration of Liberation Day, which falls on Monday.

After the board comes up with a list of people recommended to be pardoned, Justice Minister Han Dong-hoon will report the list to President Yoon Suk-yeol, and the final decision is expected to be made public on Friday.

Lee, vice chairman of Samsung Electronics, is one of the most talked about potential beneficiaries.

The Samsung vice chairman was sentenced to 2 1/2 years in prison in a bribery case involving former President Park Geun-hye and released on parole in August last year.

His prison term officially ended on July 29, but he still needs a pardon to be free of post-prison restrictions to return to his management post.

Local business circles have called for a pardon to release him as well as other business moguls, including Lotte Group Chairman Shin Dong-bin.

Leaders of the country's top conglomerates, known as "chaebol," have often received special presidential amnesties for economic crimes under the pretext that their return to management will help boost the domestic economy.

The 81-year-old former president Lee had initially been widely expected to benefit from the pardons, but uncertainties have arisen in recent weeks as Yoon's approval ratings have fallen to unusually low levels and pardoning the unpopular former president could worsen his standing.

Lee has been out of prison since June after a court granted a three-month suspension of his 17-year prison term for corruption due to health reasons.