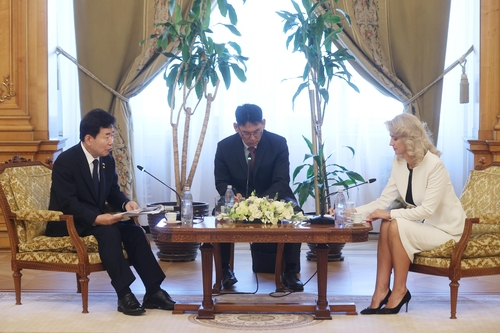 Kim held talks with Alina-Stefania Gorghiu, acting speaker of Romania's Senate, in Bucharest on Monday. Romania is the second leg of a two-nation trip that has also taken him to Poland.

"South Korea participating in Romania's arms modernization project is one way the two countries can cooperate as strategic partners," he said. "South Korean arms are excellent for their price and are compatible with those of NATO nations."

Romania, which has increased its defense budget to 2.5 percent of its GDP this year, is expected to raise it to 3 percent as it moves to modernize its arms system.

Gorghiu responded that cooperating in the energy sector would be meaningful, adding that the countries should also work together to increase bilateral trade that currently stands at $1 billion.

Stressing that the two countries should expand high-level exchanges, the Romanian speaker requested a South Korea-Romania summit on the sidelines of the UN General Assembly this fall.

Both countries took part in a summit of the North Atlantic Treaty Organization (NATO) in June but a separate summit between the two countries did not take place.

Kim said he will deliver the request to President Yoon Suk-yeol.

On South Korea's bid to host the 2030 World Expo in the southeastern port city of Busan, Kim asked for Romania's support in the vote. Gorghiu said while the country remains undecided, she understands that Busan is a highly eligible candidate and promised to try her best considering that the two countries have helped each other in international competitions.

Kim thanked Romania for its help during South Korea's COVID-19 vaccine shortage, while Gorghiu voiced gratitude for the country's alliance with Ukraine during Russia's invasion. (Yonhap)