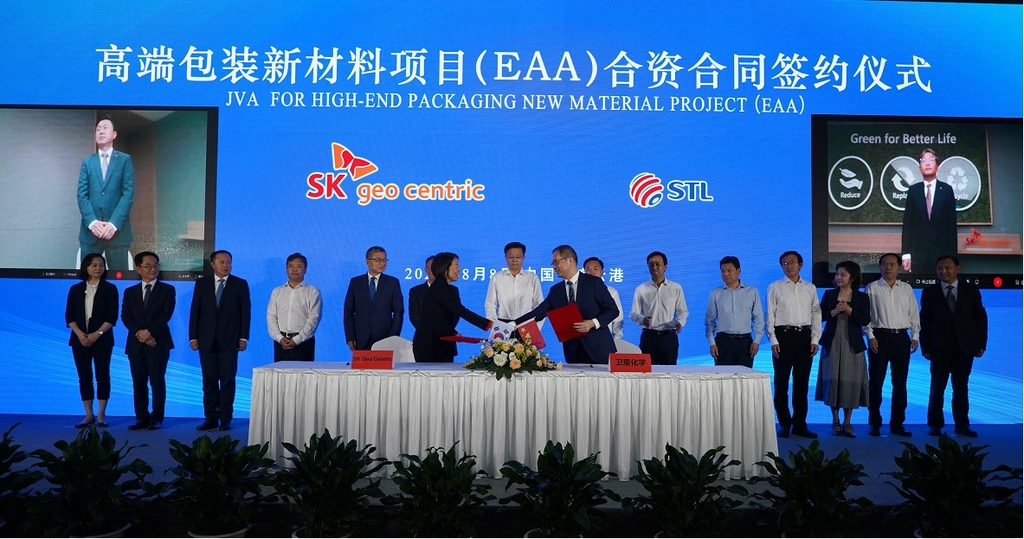 Chae Yeon-choon (L), head of SK Geocentric's investment division, and Shen Xiao-wei, vice president of Zhejiang Satellite Petrochemical Co., shake hands during a signing ceremony for their joint venture to build an EAA plant in the Chinese city of Lianyungang, in this photo provided by SK Geocentric on Tuesday. (SK Geocentric)

SK Geocentric Co., a chemical unit of South Korean's No. 2 conglomerate SK Group, said Tuesday it is building a plant in China that will produce a high value-added packaging material to expand its presence in Asia's largest market.

SK Geocentric will form a 6:4 joint venture with Zhejiang Satellite Petrochemical Co., and the factory will be built in a petrochemical complex in Lianyungang, a city in northeastern Jiangsu Province, according to SK Geocentric.

A total of 290 billion won ($223 million) will be invested for the construction that will be completed by the first half of 2025. The factory will manufacture some 40,000 tons of ethylene acrylic acid (EAA), a type of an adhesive copolymer heavily used in flexible packaging, including meat and cheese packaging and protective metal coating, such as wire and cable.

The signing ceremony for the joint venture took place in China on Monday, attended by officials of the two companies and others from the Lianyungang city government, it said.

SK Geocentric said it expects the joint venture will help pave the way for expanding its presence in the burgeoning advanced materials and other eco-friendly materials market in Asia, on top of its ongoing projects in the United States and Europe,

SK Geocentric, formerly SK Global Chemical, acquired the EAA business from Dow Chemical Company in 2017. It has since been investing heavily in the packaging material business, with a focus in emerging countries in Asia. It currently runs two other EAA plants in the US and Spain. (Yonhap)