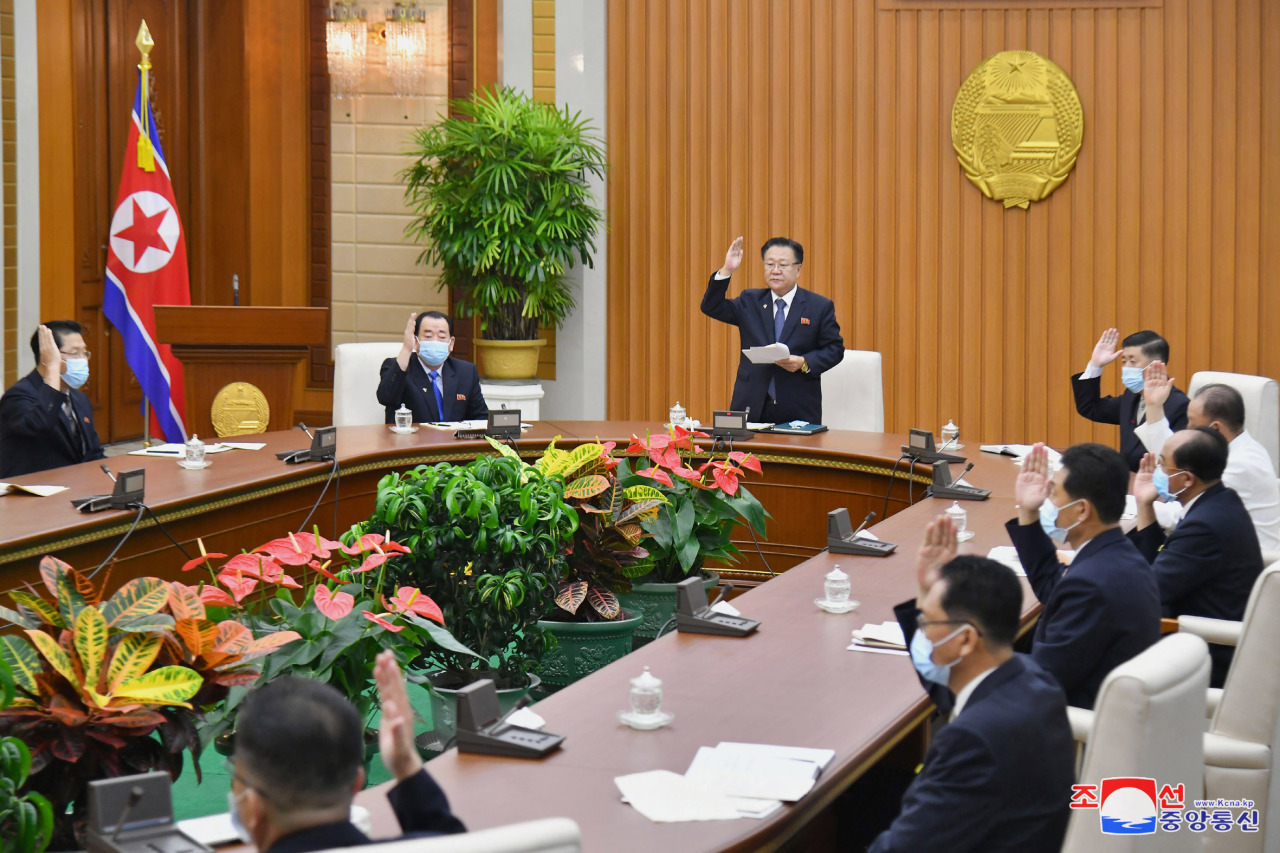 A plenary session of the standing committee of North Korea's Supreme People's Assembly takes place at the Mansudae Assembly Hall in Pyongyang on Aug. 7, 2022, with Chairman Choe Ryong-hae (standing) presiding. (Korean Central News Agency-Yonhap)
North Korea’s rubber-stamp parliament has revised and supplemented the space development act while announcing its plan to hold a full-scale meeting in early September in the run-up to its National Foundation Day.

The decisions were made at the plenary meeting of the Standing Committee of the 14th Supreme People’s Assembly, held at the Mansudae Assembly Hall in Pyongyang on Sunday. Choe Ryong-hae, chairman of the Standing Committee of the SPA, presided over the meeting, the state-run Korean Central News Agency and the Rodong Sinmun, a party organ, reported Monday.

Space development act
North Korea’s parliament notably “revised and supplemented the law on space development,” which was adopted at the SPA session in April 2013 under the Kim Jong-un regime.

The space development law essentially “regulates the design, manufacturing, assembly, launch, ground control, operating procedures of space vehicles such as artificial satellites,” according to the text of the pre-revised law.

The amendment is noteworthy given that North Korean leader Kim Jong-un in March pledged to launch a large number of reconnaissance satellites by 2025. The North Korean state media labeled its two ballistic missile launches, involving a new Hwasong-17 intercontinental ballistic missile system in February and March, as an “important test” to develop a reconnaissance satellite.

The US Defense Intelligence Agency in April assessed that North Korea sought to capitalize on its space program as a disguise to test technology used in ballistic missiles and obtained valuable data applicable to the development of long-range and multistage ballistic missiles.

The new act stipulates that the country should “establish the all-people self-defense guard system as well as ensuring conditions for self-defense and strengthening guidance and control over self-defense.”

“The adoption of the self-defense guard act is related to the significant increase in criminal acts such as robbery and theft in North Korea, and it is in line with the move to reinforce the ‘inminban’ security system in a bid to prevent crimes,” Lim Eul-chul, a professor of North Korean studies at Kyungnam University in Seoul, said. The Inminban local group is a network of Orwellian neighborhood watches that monitor local people.

“Internal circumstances - where violent crimes and offenses against public welfare have sharply increased due to the prolonged COVID-19 situation and shrinking activity in (black) market - appears to be reflected,” Lim added.

North Korea’s parliament also adopted a medicines control act that regulates the production, inspection, storage, supply, sale and use of medicines. The new law stipulates related basic principles to “ensure that medicines are thoroughly used to protect and promote public health,” according to state media reports.

Lim said the adoption of the law “seems to be a measure to eradicate the production of counterfeit drugs and illegal distributions and transactions which appeared during the COVID-19 situation, and secure medicines in preparation for a prolonged emergency anti-epidemic campaign.”

Two key meetings to be held
The North Korean parliament’s standing committee also decided Sunday to hold a full-scale meeting on Sep. 7 in Pyongyang, the state media outlets reported the following day. The seventh session of the 14th SPA aims to discuss agenda topics, including adopting the law on socialist rural development and the law on afforestation and greening, as well as organizational issues.

The full-scale meeting will be notably open two days before North Korea marks National Foundation Day, which falls on Sep. 9. The last parliamentary meeting was held this February.

Meanwhile, a national review meeting on emergency anti-epidemic policy will be convened in early August with the decision of the Central Committee of the ruling Workers‘ Party of Korea and the Cabinet, the state media said Monday in a separate report.

The goal of the meeting is to “completely examine the achievements, experiences and lessons from the state emergency anti-epidemic work and decide the direction of new anti-epidemic policy.”

The policy review meeting came after North Korean state media outlets claimed that there had been zero fever cases between July 28 and Aug. 7. although questions remain on the validity of official statistics.

Since North Korea first admitted an outbreak of COVID-19 on May 12, it has reported daily cases in terms of the number of people with feverish symptoms. This is mainly due to a lack of diagnostic equipment.

The state media also argued on Aug. 4 that all of its feverish patients, which came to more than 4.77 million, had fully recovered as of 6:00 pm on Aug. 3.