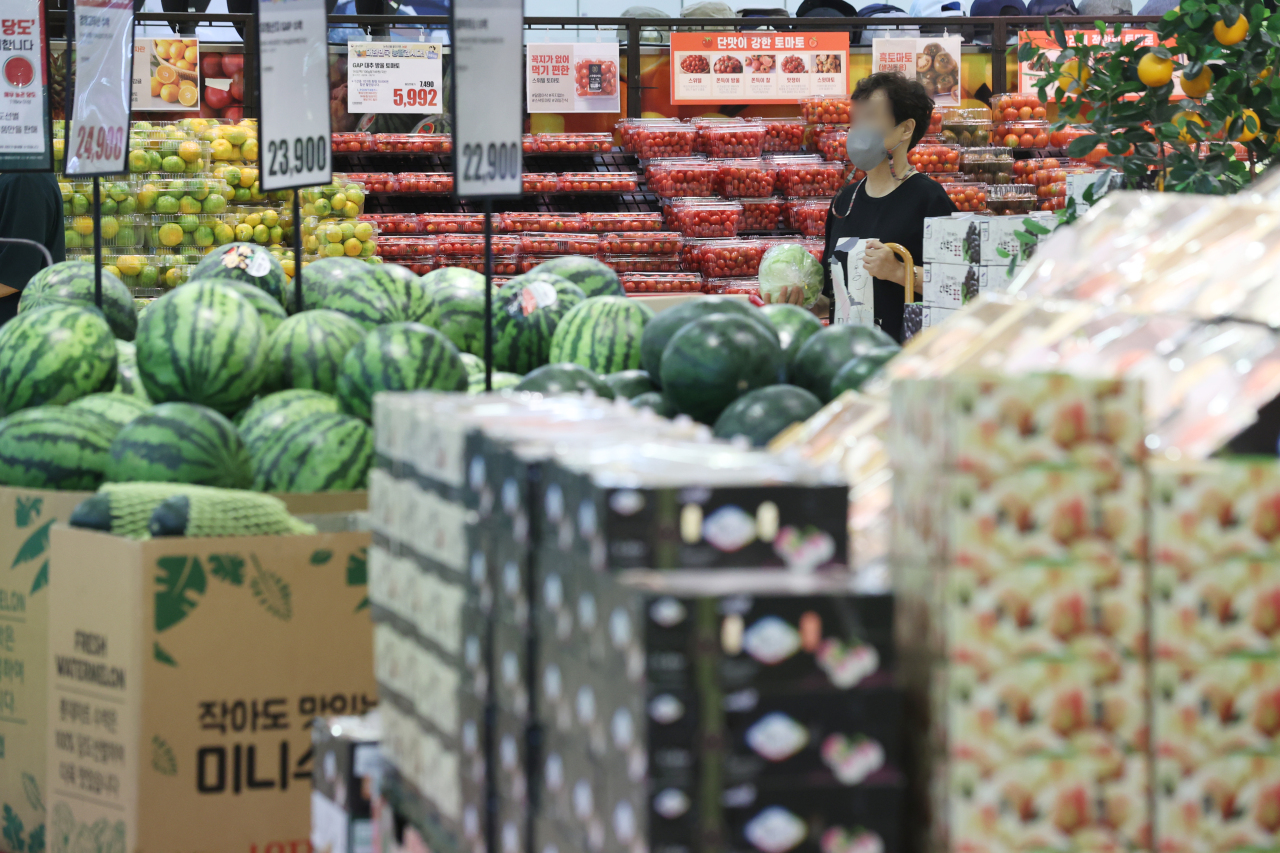 Boxes of fruit are on sale at a discount chain in Seoul on Monday. (Yonhap)
South Korea’s inflation rate this year is likely to exceed 5 percent, marking the highest in 24 years, as average consumer prices in the first seven months have risen 4.9 percent from a year ago, according to Statistics Korea.

In July, consumer prices rose at the fastest pace since November 1998, posting a 6.3 percent increase on-year, mainly due to high energy and food prices.

The government and the Bank of Korea expect inflation to peak in the fall and start to slow thereafter as international oil prices have dropped to levels prior to Russia’s invasion of Ukraine, and Ukrainian grain exports have resumed, but uncertainties remain.

Consumer prices are likely to maintain a sharp growth for the next two to three months as the prolonged Russia-Ukraine war worsens congestion in global supply chains and heat waves take a toll on farm produce. Chuseok, which falls on Sept. 10 this year, and public utility rate hikes slated for October, will also add to the upward pressure on prices.

The government therefore is set to announce this week a set of measures to ease burdens on households and businesses, including 9,900 won tickets for unlimited use of public transport, discount coupons for agricultural, livestock and fisheries products, and special loans for small businesses, a month ahead of the Chuseok holidays.

Prices of milk, an essential ingredient in bread, coffee and ice cream, could also rise again this year as the dairy industry is locked in a dispute with the government over its plan to revise the current supplier-friendly pricing methods.

Eoh Woon-seon, chief of short-term economic statistics at Statistics Korea, also said this year’s inflation is expected to hit above 5 percent for the first time in 24 years since 1998.

Uncertainties still remain high over external, inflation-driving factors such as the recent flare-up between China and Taiwan, which could further choke global supply chains.

“The China-Taiwan conflict could heighten confrontation between the West (the US and Europe) and the China-Russia bloc, prompting the dollar to strengthen further and the Korean won to weaken even more,” said Cho Young-moo, a researcher at the LG Economic Research Institute.

“This could add to the upward pressure on prices of imported goods.”

Finance Minister Choo Kyung-ho said he expects consumer prices to peak in late September or October at the latest, but added that such projection is based on the premise that international oil prices do not rebound or skyrocket, and grain supply and challenges to the global supply chain do not worsen even further.