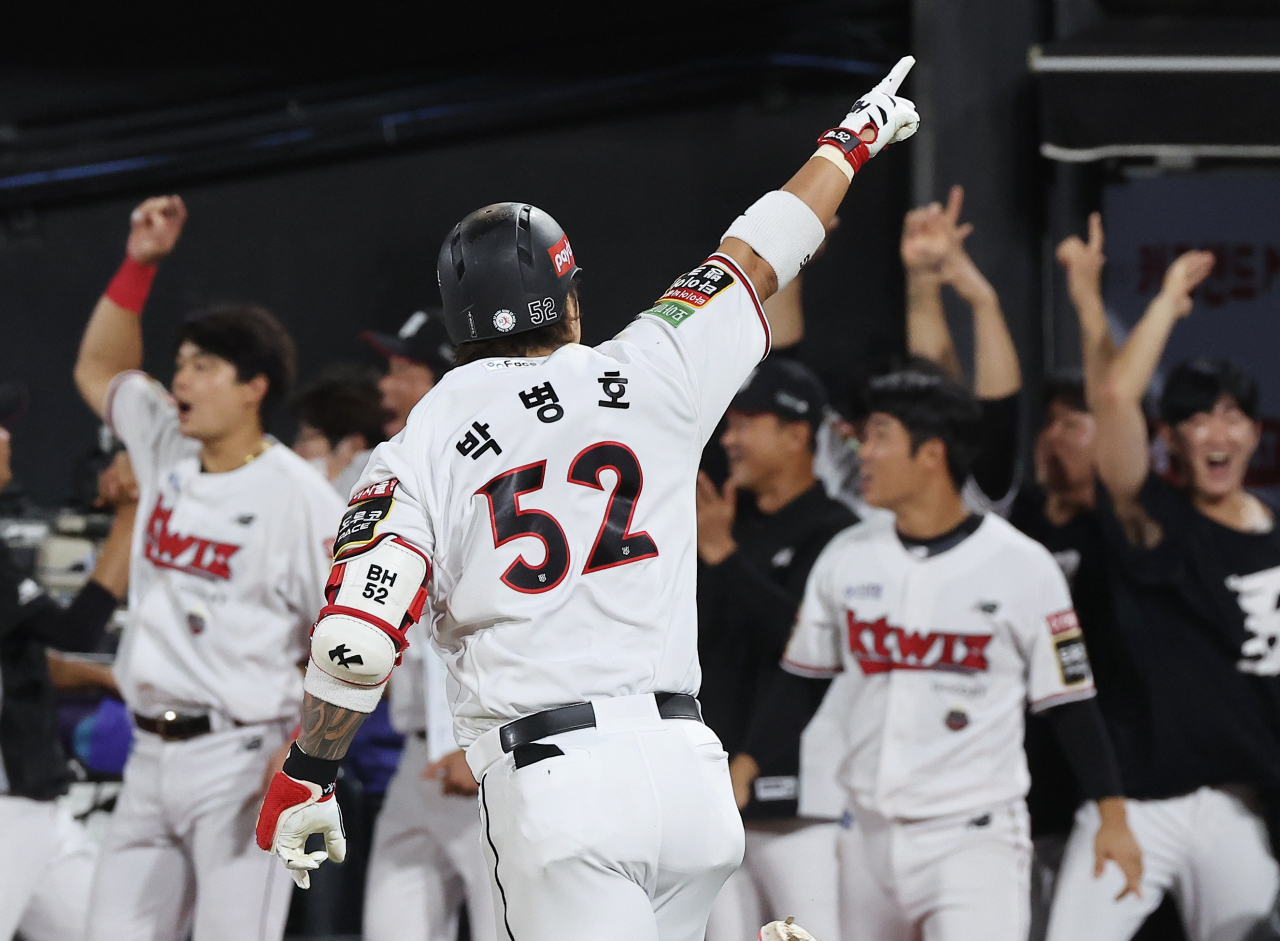 In this file photo from July 27, Park Byung-ho of the KT Wiz celebrates after hitting a walk-off, two-run home run against the Kiwoom Heroes during the bottom of the ninth inning of a Korea Baseball Organization regular season game at KT Wiz Park in Suwon, 35 kilometers south of Seoul. (Yonhap)

The SSG Landers remain so far ahead of the pack in South Korean baseball this year that other contenders are essentially playing for second place.

The Landers hold an eight-game lead over the LG Twins with 44 games left in the Korea Baseball Organization (KBO) season. Barring a collapse of epic proportions, the Landers should be able to claim the regular season crown.

The Twins and the Kiwoom Heroes kept trading places all last week, and the Heroes are now one game behind their Seoul rivals for third place.

The Wiz are now making some noise, having climbed to fourth place, five games back of the Heroes and four games ahead of the Kia Tigers in fifth.

On June 30, the Wiz were still in fifth place and trailed the then third-place Twins by 7.5 games.

Since July 1, though, the Wiz have posted the league's second-best record, 16-6, bested only by the Landers' 20-5 mark. The Wiz have been the best pitching team in that span, with a 3.39 ERA.

The Wiz will visit the Landers for three games starting Wednesday in the most intriguing matchup of the week.

The Landers have a winning record against every opponent this season but have had the toughest time against the Wiz so far with a 5-4 record.

The Landers will look to contain some hot bats in the Wiz lineup: Cho Yong-ho, who has the third-highest batting average since the All-Star break with .429; slugger Park Byung-ho, the league leader with 32 home runs and 85 RBIs; and Anthony Alford, who has a .959 on-base plus slugging percentage in the second half.

The Doosan Bears, with a record streak of seven straight Korean Series appearances in jeopardy, are making a desperate push to get into the postseason. They are still underachieving at 43-51-2 (wins-losses-ties) but now find themselves in sixth place, 4.5 games behind the Tigers.

The Bears will also face the Landers on the weekend, and the meeting will come with a twist.

The conventional three-game series will wrap up Friday, and the weekend will mark the start of two-game sets. This arrangement was put in place once the league expanded to 10 clubs in 2015, with teams playing every opponent 16 times for 144 games.

For teams, it will mean taking on three different opponents per week with additional traveling. Players and coaches have not been a fan of this scheduling quirk, citing its impact on fatigue this late in the season, and the KBO's executive committee, made up of clubs' general managers, will meet this month to discuss abolishing the two-game series. (Yonhap)