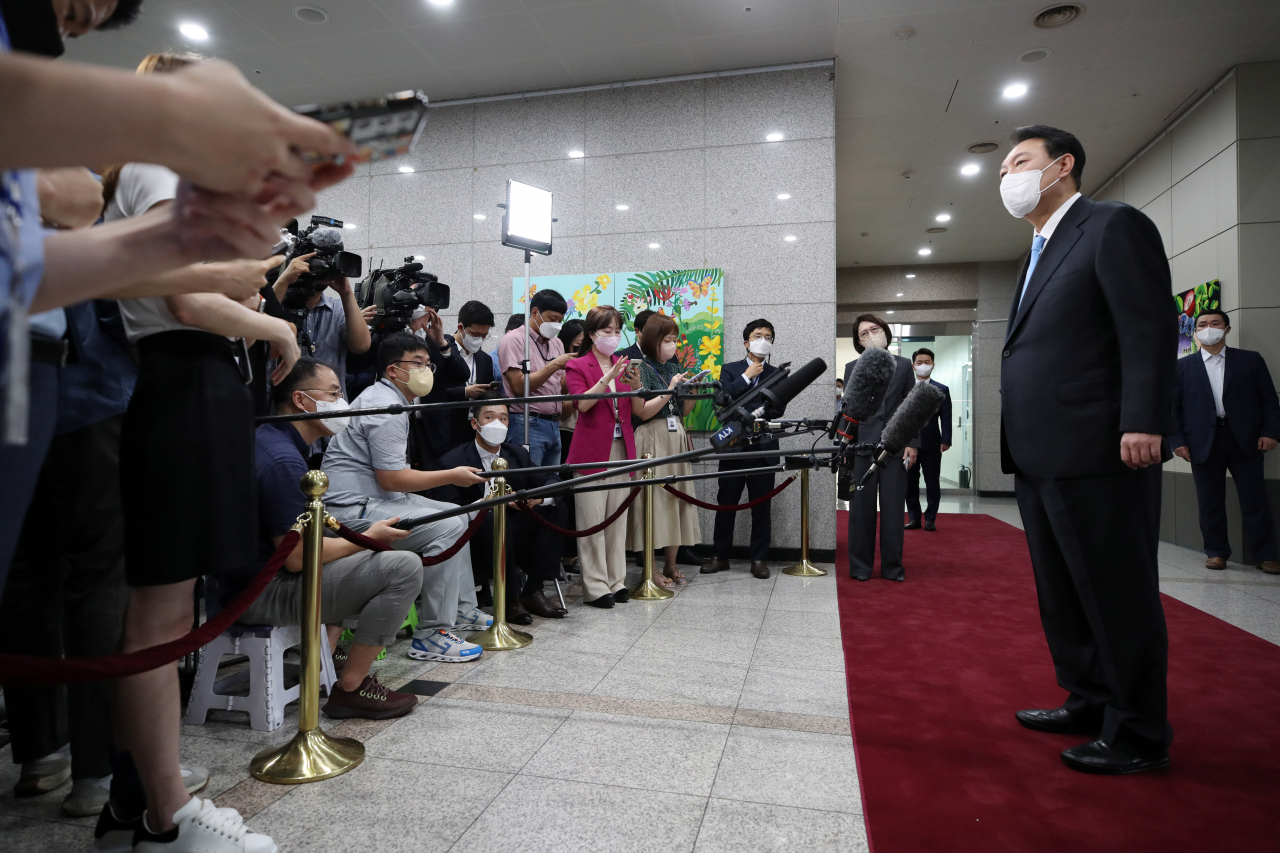 President Yoon Suk-yeol answers reporters' questions while arriving for work at the presidential office in Seoul on Monday, after a weeklong summer vacation. (Yonhap)

President Yoon Suk-yeol vowed to uphold the will of the people as he returned from a weeklong vacation on Monday, as public opinion polls showed his approval ratings remaining below 30 percent.

Yoon took questions from the press for the first time in nearly two weeks and was asked how he felt returning from his first vacation since taking office in May.

"I guess I should say my vacation was a time to reinforce my belief that at the end of the day, my duty to the people is to carefully examine the people's will and to uphold the people's will while sticking to my original intentions," he said.

Yoon said he reflected on everything that happened between his campaign, the transition period and after his inauguration and felt a renewed sense of gratitude to the people for building him up both through harsh criticism and heartfelt encouragement.

The president has suffered from approval ratings lower than 30 percent for days amid economic woes and public backlash against unpopular policy proposals, such as a plan to lower the elementary school starting age by one year to 5.

Asked if he plans to carry out a personnel reshuffle, including the possible replacement of Education Minister Park Soon-ae, Yoon said he will "look at everything from the people's point of view."

"Democratic politics and the running of state affairs can't be done unless we go together with the press, so as I'm seeing you all for the first time in a long time, I ask you all to help me a lot," he told reporters.

Yoon also sought to reassure the public over South Korea's possible participation in the US-led semiconductor alliance "Chip 4," saying the government is closely examining the issue from the perspective of the national interest.

The Chip 4 is an envisioned alliance involving the US, South Korea, Japan and Taiwan, which China views as a grouping aimed at countering its influence in global supply chains. (Yonhap)