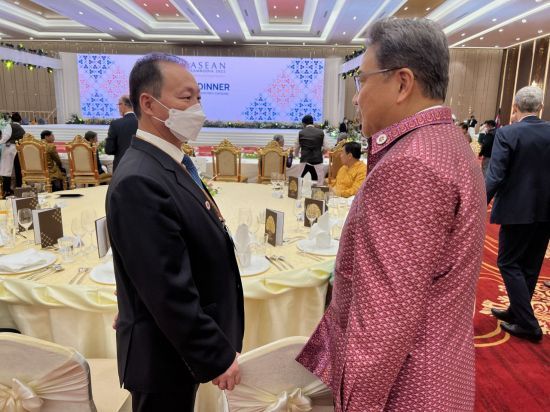 “To put it in one word, it is just a moderately modified version of Lee Myung-bak’s policy of ‘denuclearization, open and 3000,’ which was criticized by various circles in the South as an unrealistic reunification plan by absorption,” the weekly said in an article published Sunday.

“It is really an idiot’s strange behavior of Yoon Suk-yeol to bring back the plan that went down without seeing the light of day and became a piece of waste paper thrown in a trash bin 10 years ago, and rename it an ‘audacious plan.’”

The North Korean media outlet was referring to the “Vision 3000: Denuclearization and Openness,” a policy the conservative former Lee Myung-bak administration introduced in 2009.

The policy had promised to offer comprehensive aid to Pyongyang, to bring its per capital income to $3,000 within 10 years, if it chose the path of complete denuclearization. The policy made it clear that denuclearization should come before any economic incentives and lifting of sanctions were to be given.

Since coming into office in May, the Yoon administration has been determined to denuclearize North Korea. The government has said it is preparing an “audacious plan” that would “significantly” change the economy and the livelihood of North Koreans if Pyongyang chooses to discard its nuclear program.

The Yoon administration noted that its North Korean policy is not the same as former President Lee’s Vision 3000, as the plan includes incentives for each step the North takes towards denuclearization.

At the Association of Southeast Asian Nations Regional Forum held in Phnom Penh, Cambodia, on Friday, Park explained Seoul has prepared an “audacious plan” that would greatly improve Pyongyang’s economy.

The security meeting, which is the only regional security event that the reclusive regime participates in, was attended by North Korean Ambassador to Indonesia and ASEAN An Kwang-il.

Addressing the ASEAN Regional Forum, Park criticized the North for carrying out a total of 31 ballistic missiles test launches so far this year, including six intercontinental ballistic missiles, and violating multiple UN resolutions.

He also pointed out that the North’s continued pursuit of nuclear weapons only undermines its security, isolates the regime and deepens the suffering of its people.

Taking part in the meeting, An maintained Pyongyang’s attempt to strengthen its military is only a measure of self-defense, and noted that the introduction of US strategic assets on the Korean Peninsula, as well as Seoul and Washington’s joint exercises are “antagonizing” the North.

Park and An greeted each other during a welcome dinner on Thursday, while taking part in a series of foreign minister meetings hosted by ASEAN.

In a brief conversation, Park called for unconditional dialogue between the two Koreas, and expressed hopes for denuclearization to create peace and security on the Korean Peninsula, according to a Seoul Foreign Ministry official.

An responded that conditions should be created for these dialogues to happen.

The North Korean ambassador was seen to be attending the event on behalf of Pyongyang’s top diplomat Choe Son-hui, as the reclusive regime implemented strict quarantine measures in the wake of the COVID-19 pandemic.