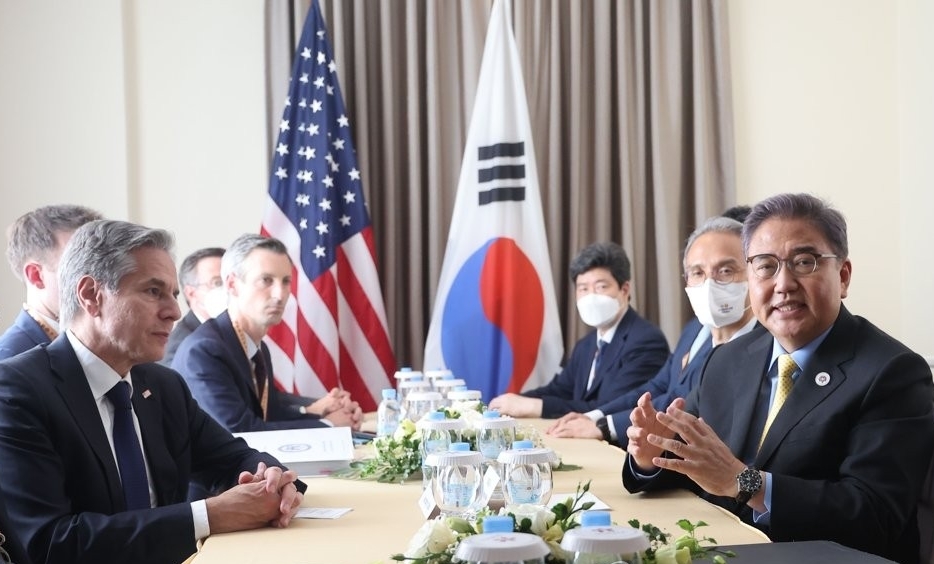 South Korean Foreign Minister Park Jin (R) and U.S. Secretary of State Antony Blinken (L) hold talks in Phnom Penh, Cambodia, on Aug. 5, 2022. (Yonhap)
The top diplomats of South Korea and the United States had discussions on regional and global issues, including relations with China, in Phnom Penh on Friday.

The talks between Foreign Minister Park Jin and Secretary of State Antony Blinken were held on the sidelines of ASEAN-hosted annual sessions.

"Our alliance is really a linchpin for peace and security in the Indo-Pacific. And, of course, we are working together to confront so many different regional as well as the global challenges," Blinken told reporters following the 25-minute meeting.

Park also said he used it to explain Seoul's position on relations with China and Japan in light of the Indo-Pacific strategy.

Among other issues discussed were how to cope with nuclear and missile threats from North Korea as well as Russia's invasion of Ukraine and the humanitarian crisis in Myanmar, they added.

Asked about whether the sensitive matter of the Washington-led Chip 4 Alliance for the semiconductor industry was raised as well, Park just said, "We had useful discussions on various pending issues."

Park had the one-on-one meeting with Blinken three days before heading to China for bilateral talks with the country's foreign minister, Wang Yi.

It marked the fourth meeting between Park and Blinken since the minister took office in May. (Yonhap)