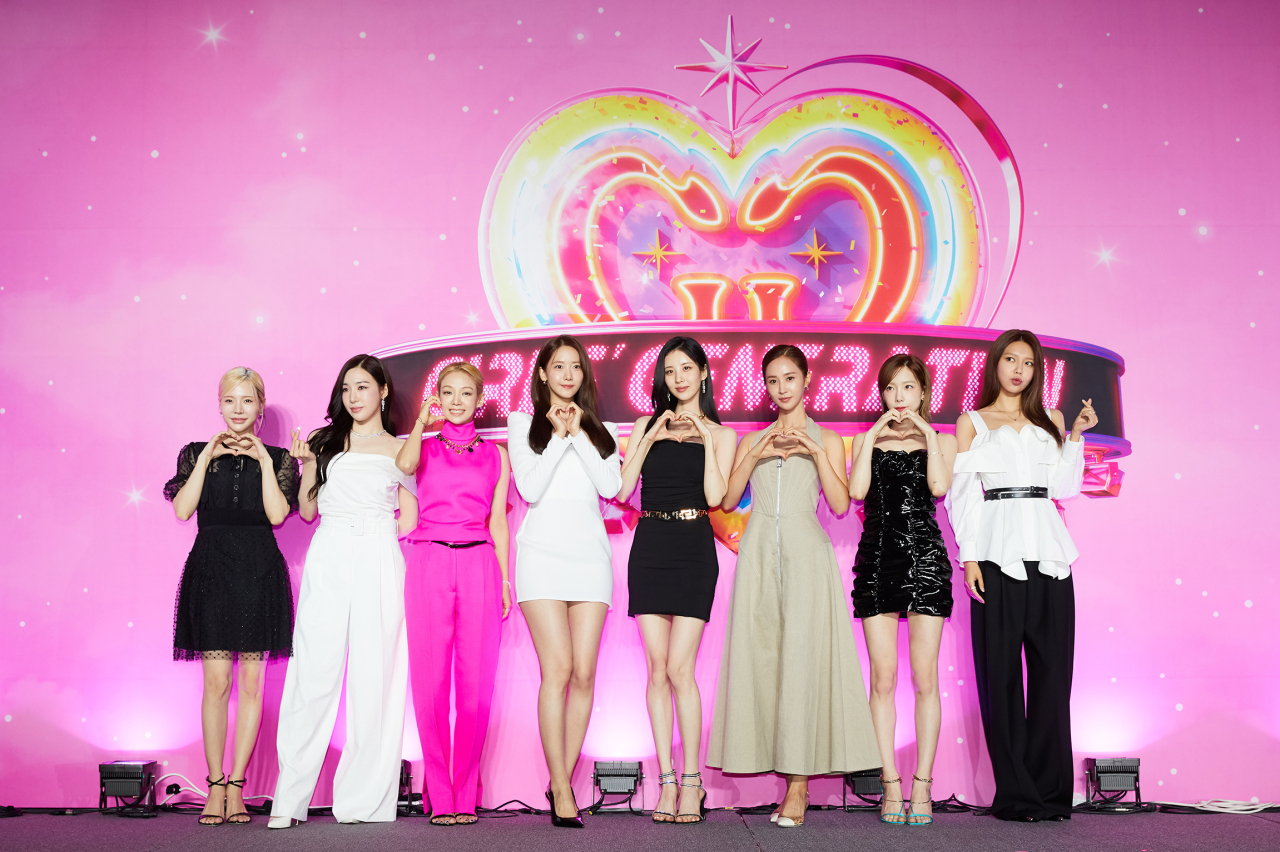 Just like the title of the band’s first single, “Into the New World,” Girls’ Generation opened up a new era in the K-pop scene with their debut on Aug. 5, 2007. The nine-piece instantly took the nation by storm, reigning on the top of the charts and popularity for years.

Fifteen years have passed since, but their presence is still irreplaceable. Now, as the nation’s longest-running girl group, Girls’ Generation celebrated its 15th anniversary with its full-group comeback in over five years with its seventh LP “FOREVER1.”

Ahead of its comeback later that day, the girls conducted a press conference in Seoul on Friday morning. The group’s SM Entertainment labelmate, SHINee’s Minho, emceed the event.

“It’s our 15th anniversary today, and we’ve worked hard to make today a day of celebration for Girls’ Generation and our fans, so please listen to it out of love,” Sunny said, while Yuri piped in, “It will be a party. As we’re back together in five years, we’ll make August a month of Girls’ Generation!”

The members had planned to drop an album since last year, but agreeing that they should prepare for it properly, postponed their group comeback a year to drop a 15th anniversary album.

The seventh studio album from the band, “FOREVER1” is led by a titular song of the same name, a dance-pop number that exudes a freshness and festivity like that of a summer night festival.

The song is written by the group’s longtime partner and in-house SM Entertainment songwriter Kenzie. It sings of the group’s wishes to stay as one forever.

“The lyrics carry our words of everlasting love to those we cherish, such as in the lyrics that go, ‘Let’s be forever one.’ It’s something that Girls’ Generation can say right now and it suits us perfectly,” Taeyeon said.

The song is more special as it pays tribute to the band’s debut song, “Into the New World,” by carrying the code of the 2007 song in the introduction and in the bridges.

“We told Kenzie that we want people to be able to be reminded of ‘Into the New World’ the instant they hear the song. We didn’t realize what kind of significance that song would carry back in 2007, and just worked hard to perform it energetically. Its significance became clear with time, and we hope that the new song could become like the second ‘Into the New World,’ and hopefully many people would sing along to it as well,” Sooyoung said. 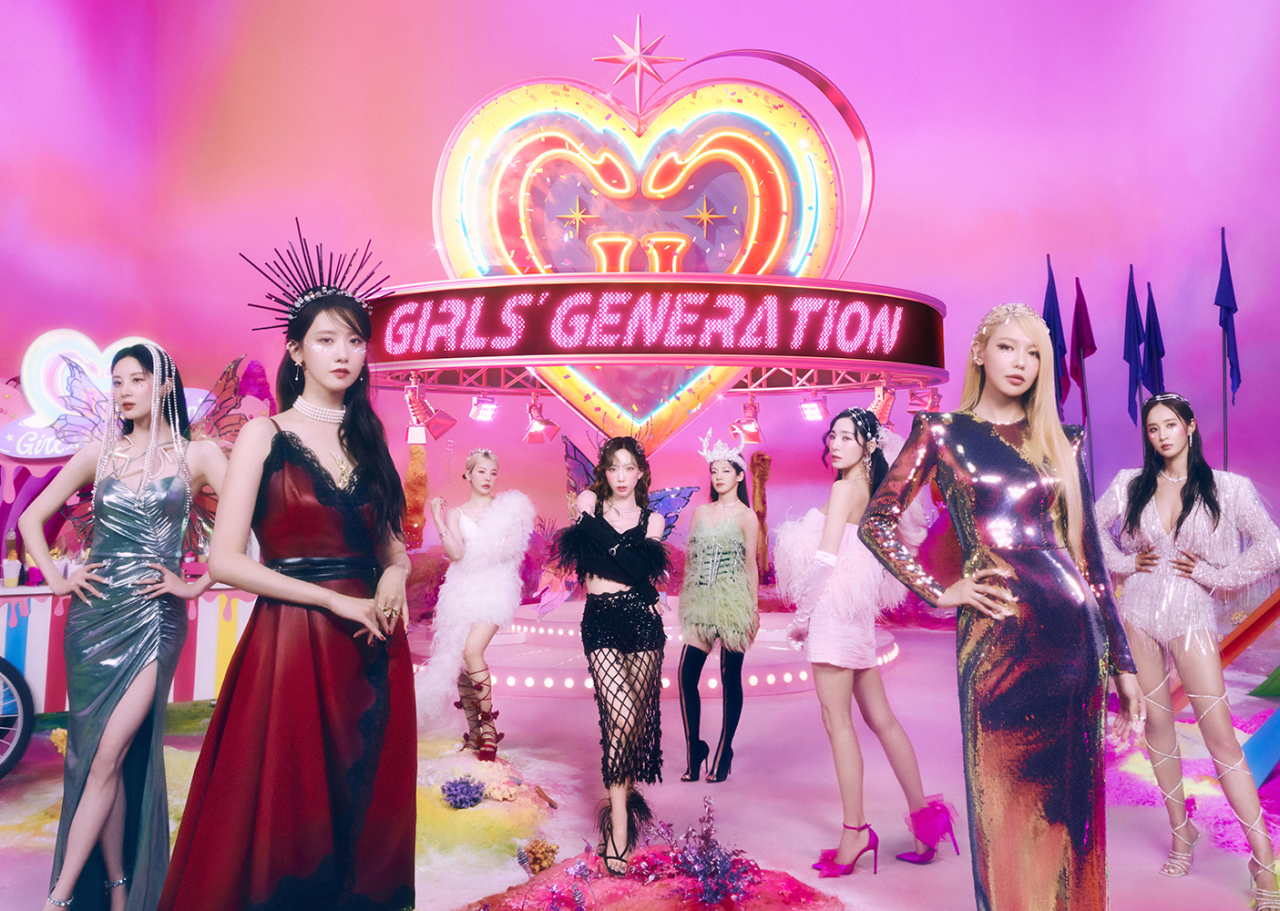 Concept image of Girls’ Generation 7th LP “FOREVER1.” (SM Entertainment)
The album, which was made based on the detailed opinions of the members, includes nine side-tracks, “Seventeen,” “Villain,” “Lucky Like That,” “You Better Run,” “Closer, “Mood Lamp,” “Summer Night,” “Freedom” and “Paper Plane.”

For “Villain,” Tiffany contributed to the songwriting and overall producing, while Sooyoung penned the lyrics.

Tiffany said she accentuated the performance aspect of Girls’ Generation in writing the melodies, while Sooyoung said the lyrics convey a message about believing in oneself and going that way rather than following what is accepted by others.

“The villain here is closer to a ‘freak’ rather than an actual villain. We’re now living in a world where characters with clear identities and personalities are loved. Girls’ Generation is also very unique, and I wrote the song with the hopes that maybe someone who is considered a villain to many could be a hero to some,” Sooyoung said.

The song “You Better Run,” as implied by the name, is a spin-off from the band’s 2010 hit “Run Devil Run.” According to Seohyun’s explanation, the “You Better Run” continues the narrative told through the 2010 song.

“All the SM artists have their own universe, and ours is the ‘Goddesses of Sound.’ But members who aren’t affiliated to the company may not be aware of this. Our youngest says she didn’t know,” Tayeon said, pointing to Seohyun, who was sitting beside her.

Once the nation’s biggest girl group, Girls’ Generation’s full group comeback holds a special meaning not just for the members, but other fans and listeners of K-pop – an industry where most girl groups cannot stand the test of time.

Even Girls’ Generation members say they were also unsure that they would make this dream come true.

“Five years, ago, we worried whether we could actually be able to come together. We’re all in different companies,” Tiffany said.

Tiffany is continuing a solo music career in the US and South Korea under her name Tiffany Young. Sooyoung and Seohyun, who are now established actors, are affiliated with different agencies, while the rest of the members are still signed with SM Entertainment.

“We are grateful that there are people who shed tears from nostalgia when they hear our voices. Thanks to them, we were able to come together and return with such a great album. I also become nostalgic in hearing past music, and I hope Girls’ Generation can also become such musicians to people,” Yoona said. 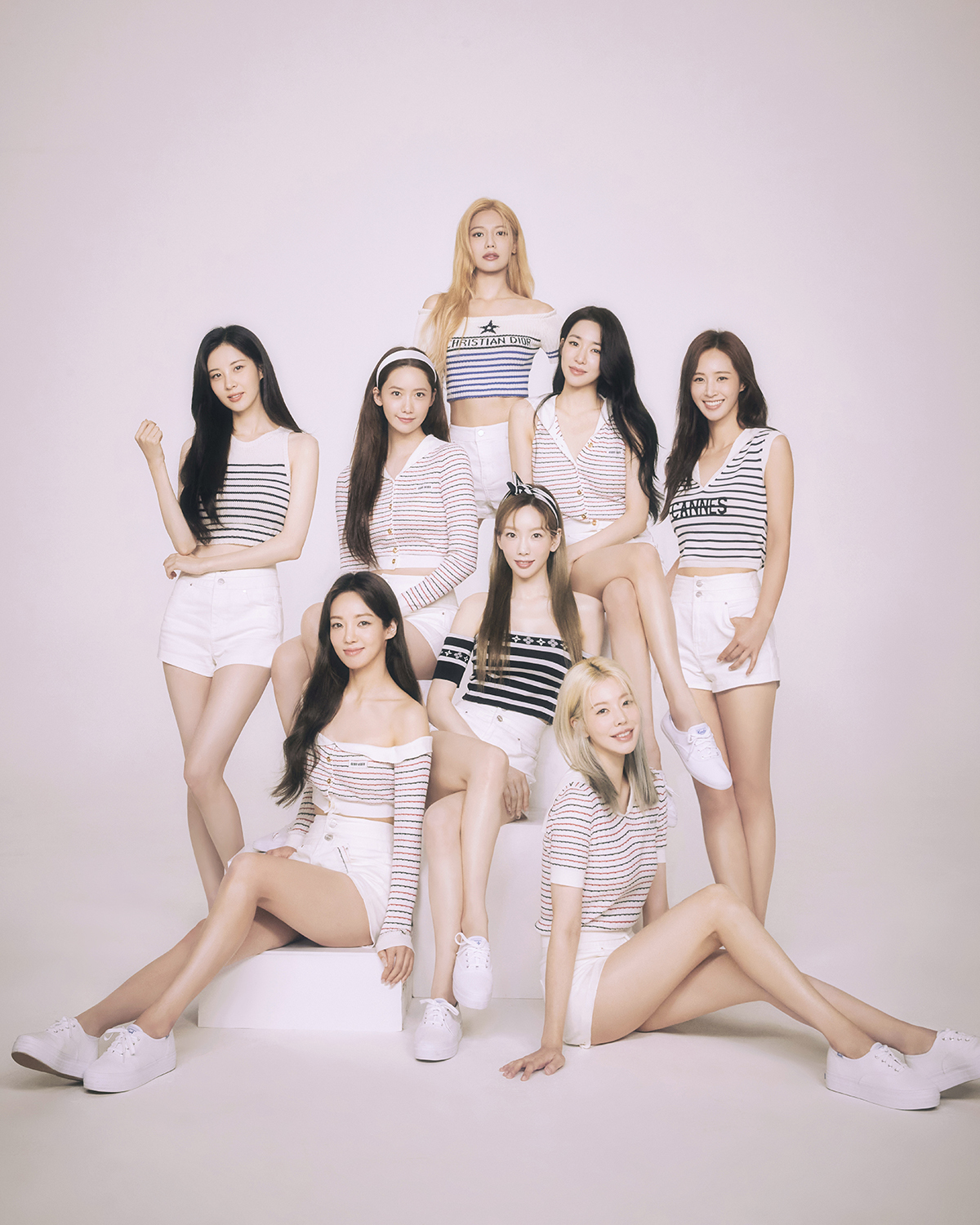 Concept image of Girls’ Generation 7th LP “FOREVER1.” (SM Entertainment)
Starting their careers together as K-pop musicians in their early teenage years, the girls are now all women in their thirties with established careers of their own. During their hiatus from group activities, the eight bandmates have strived to set down their own roots as musicians and actors -- and have now returned together on a stable ground. Not only did they feel happy to be together, they also realized how much they’ve all grown as individual entities.

“It’s been five years since we’ve each taken full responsibilities at work. So, this time, rather than feeling like a family, it felt more like professionals working together. The level of concentration was different,” Sooyoung said.

Preparing the album together, the members say they were able to look back on their path and start thinking about their future.

“We couldn’t have the time to think about the future because it was important that we focused on the ‘now.’ We’ll be making our plans for the future as we continue our promotions for the album,” Taeyeon said.

When asked what they missed the most from their past, Hyoyeon said, “I missed the concert tours the most. From the rehearsals to all the food that we ate then; I can remember (it all) clearly.”

Seohyun said she missed the five-minute night chats they used to have when they lived in the dormitory.

“We promised each other that we’d talk for at least five minutes every day. Although it was tiring to do it every day then, I think it was through those five-minute talks that we got to know each other and learned to communicate, and that is how we’re able to be so connected even until now,” Seohyun said.

Fifteen years as a group is something that cannot be maintained just for the sake of business. During the press conference, the members shared their heartfelt gratitude to everyone who waited for their comeback, and to those who put their minds together to make this miracle happen.

Last but not least, the members recognized their fans and each other.

“We’re grateful for our fans, Sowon, who are our driving forces to keep going forward. And I also believe it is thanks to the members who, while working and continuing their own battles in their lives, have never lost the will to go in the same direction and to uphold the group. That’s how we were able to stay close with each other,” Yuri said.