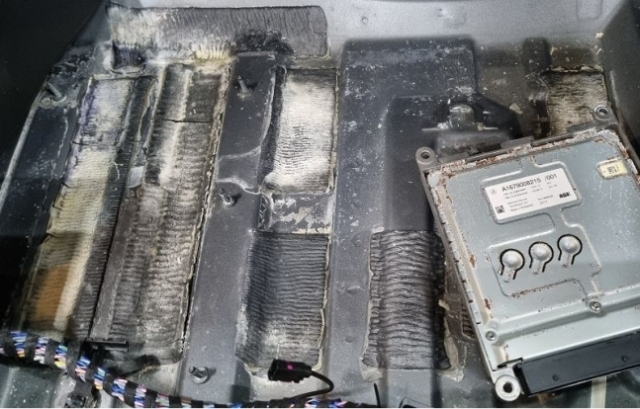 A captured photo of the corroded parts posted by the customer on an online community of local Mercedes car owners. (Captured from an online community)
Mercedes-Benz Korea issued an apology on Friday to a local customer who had accused the automaker of selling submerged cars. The company promised to exchange the vehicle in question.

The luxury car brand came under fire on July 24 when the customer posted online that the person bought a submerged car from Mercedes-Benz and that the automaker refused to compensate.

The unidentified customer said in the post: “Two weeks ago I bought a Mercedes-Benz GLS for 150 million won ($115,694) and visited the customer service center the next day because in-vehicle speakers didn’t work. When engineers took apart the trunk, many different parts were corroded.”

The customer continued: “The service center employees said the control box looked corroded from submersion and there was no current flowing in any of the wires. They said even they thought it was serious and recommended me to get an exchange.”

When the customer complained, the executive said, “It is only reasonable that the customer bears (those) costs. 15 million won is not even that much money,” according to the customer’s post.

As the report on the brand-new but submerged Mercedes went viral, the German carmaker’s Seoul branch said in a statement that “the company relayed our deepest apologies to the customer, and came to an agreement.”

“We are trying to find the exact cause to prevent something like this from happening again, and will work to maximize customer satisfaction.”

Meanwhile, other customers have also been complaining online that some Mercedes E-class vehicles’ sunroofs leak when it rains.