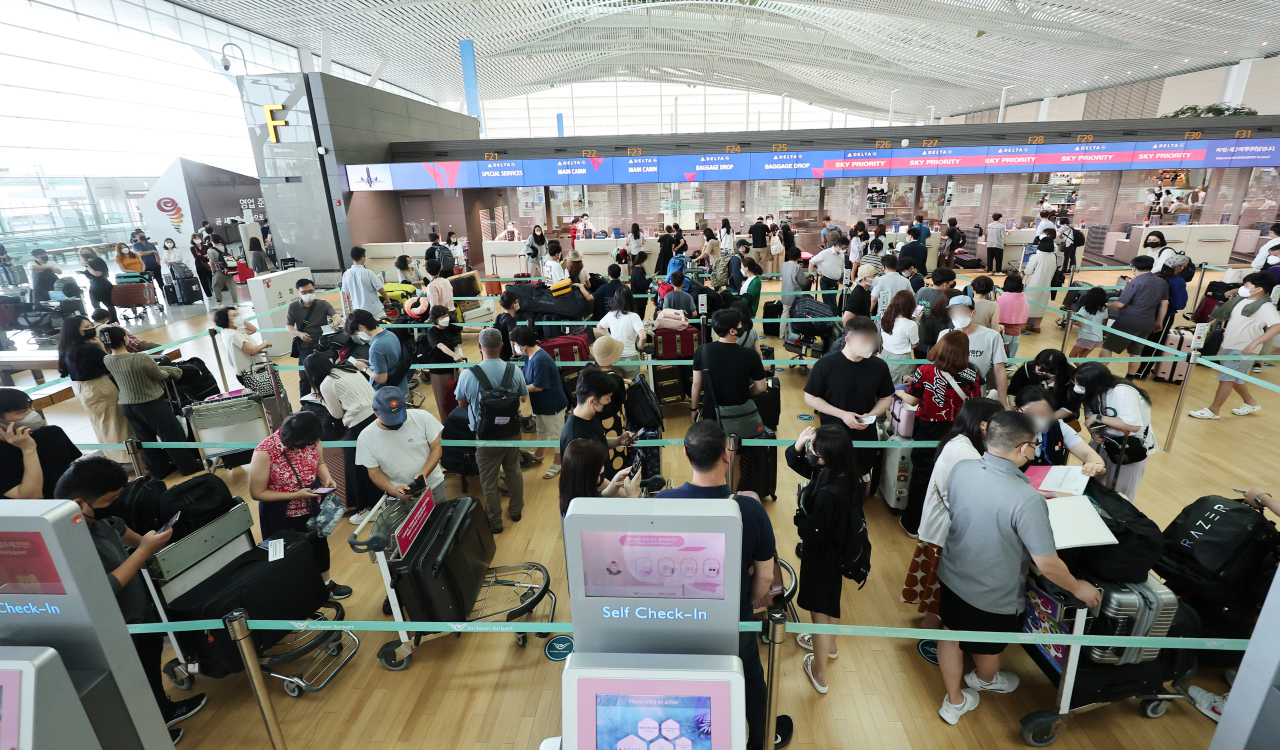 Amid another COVID-19 wave Passengers wait in line at Incheon International Airport's international terminal, west of Seoul, July 26. (Yonhap)
The number of critical COVID-19 cases rose above the 300 mark for the first time in over two months, while daily cases stayed above 100,000 for the third consecutive day, fueling concerns of another surge following the summer vacation season.

The number of seriously ill patients increased by 26 from the previous day to 310, the highest since 313 on May 18.

The “doubling phenomenon,” which means new cases doubled compared to the previous week, has subsided, but new cases are still on a continuous climb.

According to the authorities, deaths are more prevalent among older people and those not fully vaccinated. A total of 172 COVID-19 related deaths were recorded between July 24 and 30, 167 of which were people aged over 50. Of the over-50s fatalities, more than a third were either unvaccinated or had received only one shot of the vaccine, according to the KDCA.

Meanwhile, both domestic and international population movements are increasing during the summer vacation season, fanning concerns of a further spread of the virus.

The number of cases from overseas has increased since June 24, after quarantine regulations for overseas travel were eased, and it is growing rapidly as the number of travelers also went up significantly in the summer.

The government came up with “targeted” quarantine measures, establishing customized measures by specifying groups or places particularly vulnerable to infection based on data.

“We will promote ‘targeted’ quarantine that will intensively manage places where there are many new COVID-19 cases, enabling citizens to live a normal life. Please pay special attention to places where many people gather, such as concert halls and beaches,” said Lee Ki-il, second vice minister of the Ministry of Health and Welfare, during a COVID-19 response meeting held at the central government complex in Seoul on Wednesday.