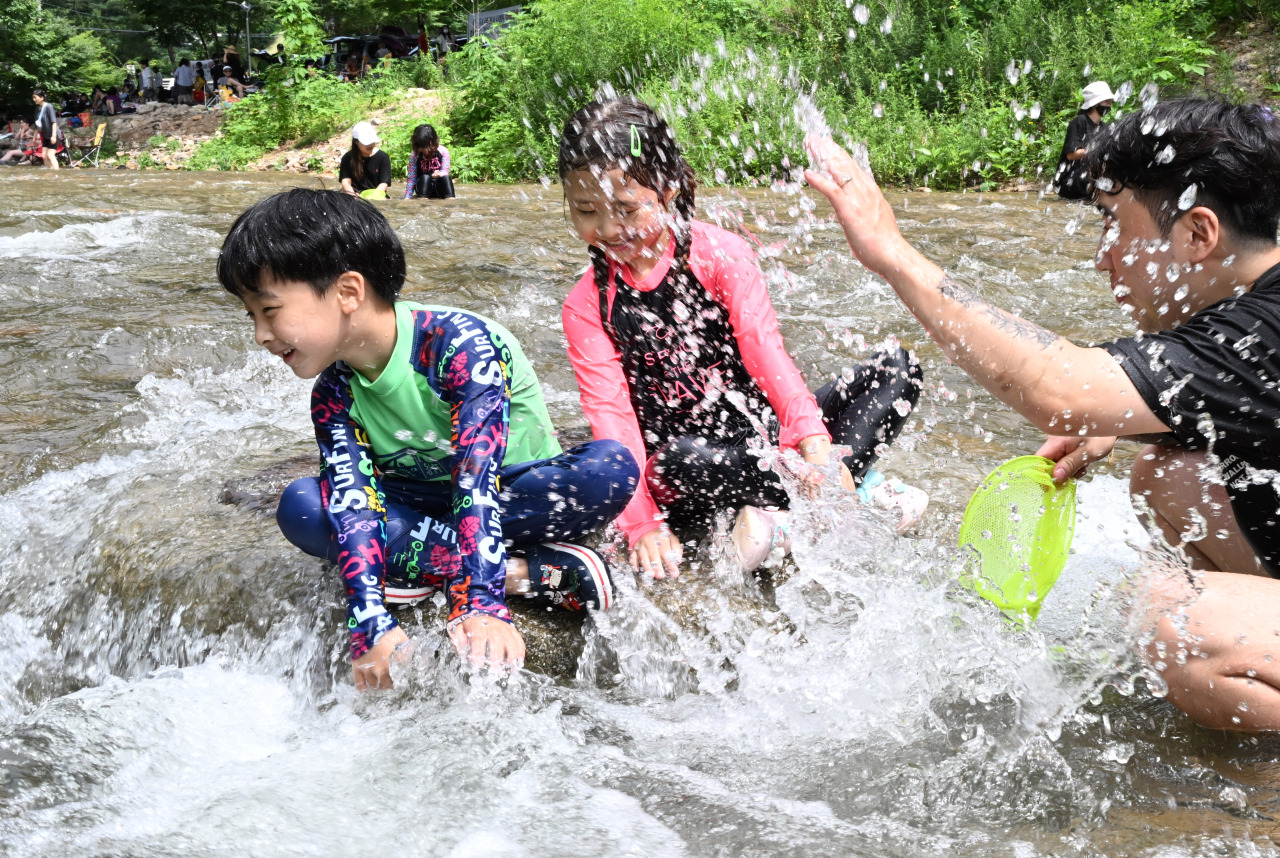 Vacationers are seen at Songchu gyegok inside Bukhansan Park, Seoul, on Tuesday. (Im Se-jun/The Korea Herald)
Millions of South Korean vacationers have flown overseas, driven to beaches and mountains around the country to escape the relentless heat this summer.

Ever since the pandemic rules against gatherings were lifted, crowds with pent-up energy have packed just about anywhere, from sports stadiums and waterparks to theaters and art exhibits.

During the country’s peak summer holiday season from late July through early August when most workers take off, a normally 2.5-hour drive from Seoul to Sokcho on the East Coast would take up to six hours.

Those who have failed to get plane tickets or other hard-to-get tickets for various summer entertainment, and don’t want to spend too much time on the road, have few options left, and one of them is hitting nearby stream valleys known as gyegok here

With hills and mountains covering about 70 percent of its territory, Korea has tons of rocky stream valleys, but most are at least two hours’ drive from Seoul, one would think.

However, there are a few gyegok in and around the metropolis where families, friends and couples can forget the scorching heat by getting soaked in nature’s cold, fresh water.

Jingwansa Gyegok is about 10 minutes’ walk from the Eunpyeong Hanok Village which is accessible by buses. There is also a Hanmunhwa public parking lot next to the stream.

Jingwansa is a peaceful Buddhist temple built over 1,000 years ago. Streams flow within the premises of the temple, but don’t jump in just here as they are part of a conservation zone.

Outside the walls next to the temple’s main building, there is a path that leads to the mountains. The stream appears after about a minute on the trail.

Taking a trip to the temple on a clear day after rain is recommended, as there will be enough water to dip one’s whole body at certain spots. But do not go when it is raining because deadly accidents in gyegok are a regular news item during every monsoon season.

Ui-dong Gyegok, located between Mount Dobong and Mount Bukhan (Bukhansan), is a popular destination for college member trainings, or short trips organized by college departments or classes, in the spring, and is dotted with cafes, restaurants, amusement parks and accommodation around the scenic mountain trails and stream valleys.

Stepping into the mountain streams in Ui-dong is generally barred for safety reasons, but several restaurants and B&Bs let their guests enjoy certain segments of the streams.

Sillim Gyegok in Gwanaksan Park is about 10 minutes’ walk from the main gate of the park near Exit No. 1 of Gwanaksan subway station.

This gyegok is usually quite dry, but the water levels rise quickly when it rains.

For about six weeks until Aug. 25, the park runs a children’s play zone in the stream from 9 a.m. through 5 p.m. It is furnished with changing rooms, lifebuoys, safety ropes and first-aid kits, and there is a restroom nearby.

Food delivery to the stream is prohibited, and so is littering.

Songchu Gyegok inside Bukhansan Park has parking lots next to it. Here too, a certain segment of the stream is open to public until late August. Sunbeds or hammocks, however, are banned.

Gingorang Gyegok in Achasan, Gwangjin-gu, is a small stream at the last stop of mini town bus Gwangjin #02. It is about 15 minutes’ walk from the nearest public parking lot.

With no cafes or restaurants nearby, the area is quiet, and like other gyegok, people recommend bringing your food, but remember to pick up everything before leaving.

For those living around Bundang, Gogiri Gyegok in Yongin, Gyeonggi Province, is a popular spot for some splash time. The narrow road into Gogiri, a village of cafes and restaurants, is heavily jammed during weekends, so try to go on a weekday.

“We came here for my son to play with his cousins. The water is clean, and this spot by Kona Haven (cafe) is good for small children because it’s shallow and has lots of trees above making it cooler,” said Oh Young-mi, mother of a 3-year-old, at Gogiri Gyegok last Friday.

In addition to the stream valleys, public water playgrounds and outdoor pools along the Han River in Seoul beckon those hungry for coolness in the vicinity.

Deeper outdoor pools in Ttukseom Resort and on Yeouido are also open to those wearing swimsuits and swim caps.