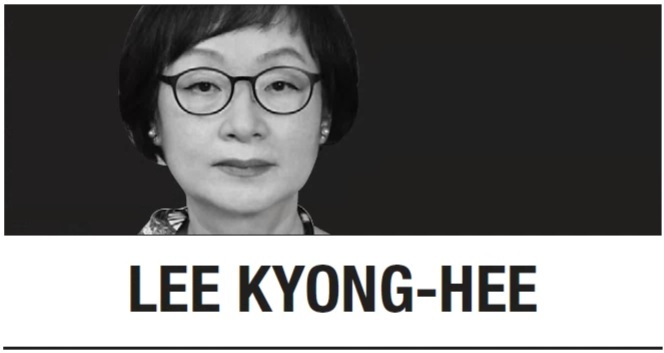 Four individuals weigh heavily on my mind these days. One survived a monthlong, self-tormenting sit-in to change the excruciating conditions of subcontract labor in shipbuilding; the other three lost their lives in the gray zone of confrontation -– and occasional, brittle mood of peace –- between the democratic South Korea and the authoritarian North Korea.

Yoo Choi-an, a 41-year-old welder, on June 22, crumpled himself into a small steel structure in the main dock of Daewoo Shipbuilding & Maritime Engineering (DSME) in Okpo, South Gyeongsang Province. A welder with 20 years of experience, he sealed the structure himself from within to protest there.

What made Yoo, deputy head of the subcontract metal workers’ union of the world’s third-largest shipbuilder, coop himself up in the cage-like structure with a can of paint thinner? A slogan he held with hands stuck out between steel sheets said, “We can’t live like this!” But how could the 180-centimeter-tall man pass even a single day in such confinement? It simply defies my imagination.

“People say I came here, but I was pushed here,” Yoo said. “What’s the use of being the world’s No. 1 shipbuilding powerhouse when ships are made of blood and tears of hapless workers?” He obviously considered it to be the only means for him to draw attention to his and his colleagues’ unending plight at the bottom of the industry’s notorious multilayer subcontracting structure.

As the strike continued, President Yoon Suk-yeol called for a quick end to the “illegal activities,” implying the use of force. Unfortunately, in emphasizing laws and principles, he showed little concern about why the workers are driven into illegal actions and how to strengthen the industry’s ability to do away with the recurring labor disputes, which often lead to tragic incidents.

In September 2020, Lee Dae-jun, a 47-year-old official of the Ministry of Oceans and Fisheries, drifted in the West Sea for 26 hours at the least – or 36 hours at the most -– before he was spotted in North Korean waters. Then he was virtually detained in the waters for another six hours under the watch of North Korean soldiers. After interrogations, he was shot to death and burned -- still in the water -- allegedly under the North’s COVID-19 quarantine regulations.

It remains a mystery how the fisheries official went overboard and drifted. In a press conference on Sept. 24, 2020, the Ministry of National Defense explained that Lee left the steering house of his fishery inspection boat at around 1:30 a.m. on Sept. 21, saying that he would take care of some paperwork. At around 11:30 a.m., his colleagues noticed his absence and reported him missing at 12:51 p.m. to the Coast Guard, which began searching the area along with the Navy.

It was said that Lee drifted 38 kilometers west-northwestward beyond the Northern Limit Line (NLL), the de facto maritime border with North Korea. There is no knowing whether Lee intended to defect to the North, as the South Korean authorities claimed, citing intelligence sources and his gambling debt. What is certain is that whether Lee intended to defect or not has no impact on the legitimate question of why the South Korean government didn’t make any explicit effort to protect him.

It is still puzzling how the same Defense Ministry and Coast Guard could overturn their judgment two years later. On June 16 this year, the military and maritime authorities reversed their earlier “assumption-based” announcement, saying that they could find no evidence that Lee made efforts to cross the border into the North. But they didn’t present the details of reinvestigation.

The truth behind the tragic incident must be found. North Korea cannot evade its responsibilities for the atrocities committed in summarily executing a South Korean citizen. The honor of a man who must have gone through unspeakable terror in the sea due to the peculiar circumstances of territorial division needs to be restored if it was undermined for political purposes. For the same reason, President Yoon should rethink his motivation to revisit his predecessor’s decisions according to his standards as a prosecutor.

The same logic may apply to the 2019 case of two North Korean fishers deported through Panmunjom. President Yoon’s spokesperson has warned that it constitutes a potential “crime against humanity.” Prosecutors have begun investigating former president Moon Jae-in and his aides’ handling of the case on charges of murder and abuse of power.

It is truly disturbing to see how the two young men reacted when they realized they were to be handed over to the North across the border in the truce village. A four-minute video clip and 10 photos of their final moments in South Korea, released last month by the Ministry of Unification, are indisputable evidence that they were forcibly repatriated against their wishes.

The two fishers, one aged 22 and the other 23, reportedly confessed to killing 16 shipmates, including their abusive captain, in an overnight high-seas mutiny in late October of 2019. They were captured aboard their squid fishing boat by the South’s Navy in the East Sea on Nov. 2. Following a three-day investigation, they were sent back to the North on Nov. 7. The Moon administration said they were “heinous criminals” who could neither be considered defectors nor refugees.

The speedy process aside, the deportation raised a basic legal question. South Korea’s Constitution defines all Koreans as equal citizens, whether from the South or the North. It means the two North Koreans deserved a fair trial in a South Korean court to prove or disprove their crime: how they were able to commit mass murder, removing their fellow crew members one by one, in a 16-ton wooden boat. They are said to have been executed soon after their return.

In reversing its earlier position, the Unification Ministry said the decision to repatriate the fishermen was “wrong.” Why was it right three years ago?