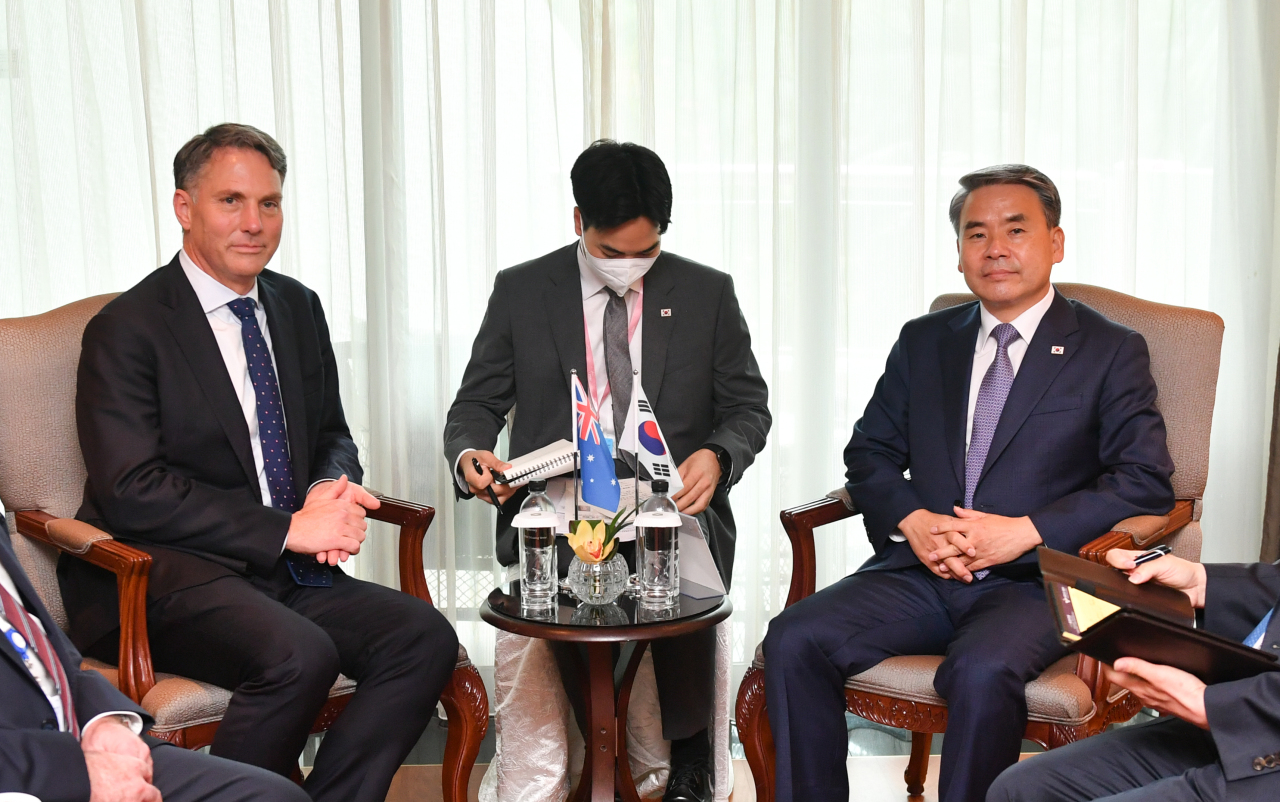 The South Korean and Australian defense chiefs will discuss a wide range of issues including North Korea, Indo-Pacific strategy and defense cooperation in Canberra this week.

Lee and Marles are set to meet Thursday and “share an assessment of the security situation on the Korean Peninsula and in the region,” according to a press statement from South Korea’s Defense Ministry.

Indo-Pacific strategy, N. Korea
Lee and Marles will discuss a broad range of issues of mutual interest during the upcoming talks which is being held nearly 50 days after they met in Singapore on the sidelines of the Shangri-La Dialogue Asian security summit in June, a senior official -- who requested to remain anonymous — said during a closed-door briefing.

Security cooperation between South Korea and Australia in the Indo-Pacific region will be part of the main agenda, the unnamed official said, adding both sides “have a laundry list of topics for discussion.”

Australia -- whose ties with China have entered a downward spiral -- is the key country in the US’ Indo-Pacific engagement strategy. Australia is part of the US-led, four-member Quadrilateral Security Dialogue, better known as Quad, as well as the AUKUS trilateral security pact.

The bilateral talks on Thursday come after Lee and Marles met US Secretary of Defense Lloyd Austin in Washington in July.

“The meeting will serve as a valuable opportunity for Minister Marles and Minister Lee to have strategic consultation on how to cooperate (in the region) by exchanging views on their visit to the US,” the senior official told reporters.

Lee and Marles are also expected to discuss ways to “conduct existing bilateral and multilateral military exercises more effectively,” the official said, adding the Australian military authorities have made a number of proposals to institutionalize and improve the format of military drills.

South Korea and Australia, for instance, are jointly participating in the Pacific Dragon multilateral ballistic missile defense exercise that kicked off Monday and continues until Aug. 14.

Australia has also a great interest in the Yoon Suk-yeol government’s Indo-Pacific strategy, according to the senior official.

Lee will be the fourth defense chief that Marles has personally met for bilateral talks since he took office as defense minister in June, the senior official said. Marles visited India, Japan and the US -- the other three Quad members -- and met his counterparts in June and July.

Against that backdrop, South Korea’s Defense Ministry had concerns over the adverse ramifications of Lee’s visit to Australia in light of an intricate regional dynamic, the senior official admitted.

Australia has taken an initiative in supporting international efforts to monitor the implementation of sanctions on North Korea.

Defense industrial cooperation
The two defense chiefs will also “discuss cooperation in the fields of defense and the arms industry as a follow-up to agreements made at the South Korea-Australia summit held at the NATO summit in June,” South Korea’s Defense Ministry said in the statement, without further details.

Lee and Marles plan to visit the city of Geelong in the state of Victoria where Hanwha Defense is building a new facility to produce K-9 self-propelled howitzers on Friday and “reaffirmed their commitment to bilateral defense industrial cooperation,” according to South Korea’s Defense Ministry.

Marles proposed the trip to Geelong where he was born and raised. Marles also represents the people of Geelong and surrounding areas as the Federal Member for Corio.

Seoul and Canberra have sought to expand defense cooperation. In December 2021, South Korea and Australia agreed to revive a bilateral memorandum of understanding on defense industrial cooperation which expired in 2011.

Hanwha Defense also seeks to be selected as a preferred bidder for the Australian Army’s LAND 400 Phase 3 project. The project aims to acquire up to 450 infantry fighting vehicles to replace M113 armored personnel carriers which have been in service since the mid-1960s.

South Korea’s Hanwha Defense and Germany’s Rheinmetall have been selected as two shortlisted contenders for the acquisition project. The two completed Risk Mitigation Activity trials -- which assess the capability of vehicles -- in October 2021.