Nasopharyngeal carcinoma (NPC) is a common type of cancer concentrated in Southeast Asia and Northern Africa. While platinum-based combination chemotherapy is the standard treatment for patients with recurrent or metastatic NPC, prognosis for patients for whom this therapy fails is poor, with limited treatment options remaining.

A study was conducted by researchers from eight South Korean institutions to evaluate the efficacy and safety of combined immunotherapy in recurrent or metastatic NPC patients for whom platinum-based chemotherapy had failed. Immunotherapy drug nivolumab and chemotherapy drug gemcitabine were administered in combination to these nasopharyngeal cancer patients, achieving an objective response rate (ORR) of 36.1% and 13.8 months of median progression-free survival (PFS). 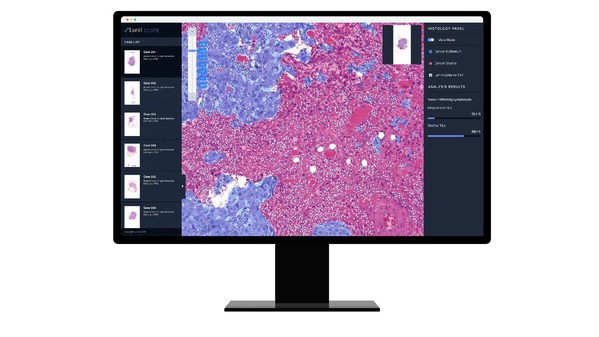 Lunit SCOPE IO analyzes a patient's cancer tissue slide image by observing the distribution of tumor-infiltrating lymphocytes (TIL), one of the primary immunocytes that fight cancer cells. Based on the spatial distribution pattern of TILs and cancer cells in the tumor microenvironment, Lunit SCOPE IO identifies the tissue sample as one of three immune phenotypes: inflamed, immune-excluded, or immune-desert.

The Inflamed Immune Phenotype, as identified by Lunit SCOPE IO, showed a high correlation with favorable immunotherapy outcomes, indicating potential as a practical biomarker. Furthermore, the Immune-excluded Phenotype was correlated with inferior ORR and PFS, indicating that the spatial distribution pattern of the Immune-excluded Phenotype acts as a resistance mechanism against combined nivolumab and gemcitabine treatment.

"This study shows that, by applying Lunit SCOPE IO to a clinical trial, it is possible to find a target group that responds better to treatment," said Chan-Young Ock, Chief Medical Officer at Lunit. "This is an important case showing that Lunit SCOPE IO can be applied not only to single-drug immunotherapies, but also to combination immunotherapies."

Lunit has continued to publish research results on the effectiveness of its AI biomarker in various peer-reviewed oncology journals. Following publications in the Journal of Clinical Oncology (JCO) and the European Journal of Cancer (EJC), this is the third study on Lunit SCOPE to be published in an international medical journal.