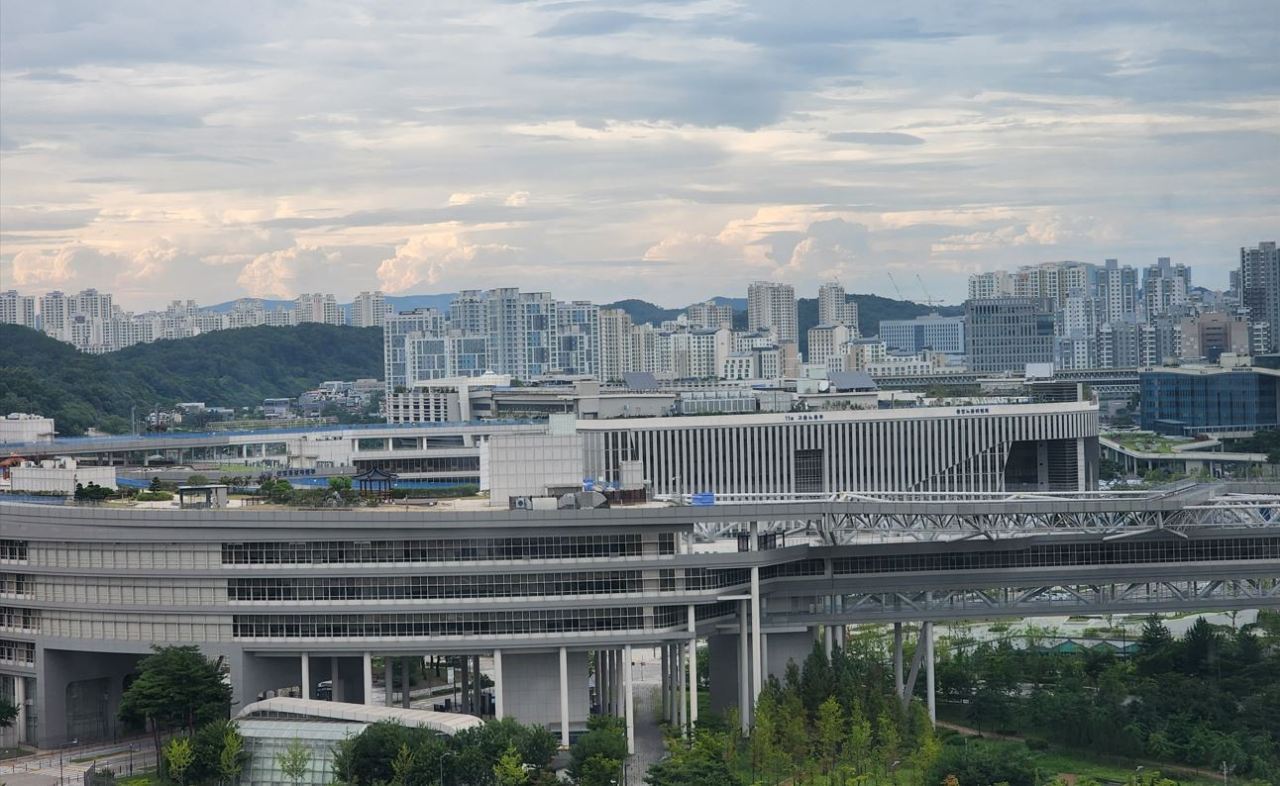 The Ministry of Trade, Industry and Energy (front row) at the government complex is seen in the administrative city of Sejong on Saturday. (The Korea Herald)
SEJONG -- South Korea posted a trade deficit for the fourth consecutive month in the wake of a noteworthy decline in exports to China as well as the spiraling import prices of raw materials, with the cumulative deficit for the first seven months of the year hitting the highest in 66 years.

In particular, the nation recorded all-time high imports in July due to a spike in energy prices, which has worsened the trade balance, state data showed Monday.

According to the Ministry of Trade, Industry and Energy, the nation suffered a trade deficit of $4.6 billion in July. This marked the first time in 14 years that Korea has recorded a trade deficit for four consecutive months. The last time was in 2008, when the global financial crisis hit the nation.

Further, the figure of $4.6 billion was the highest among the four monthly deficits between April and July.

While the nation recorded $60.7 billion in exports in July, up 9.4 percent compared to the corresponding month of 2021, imports surged by 21.8 percent on-year to hit the record-high of $65.3 billion.

On a cumulative basis for the first seven months of 2022, Korea posted a deficit of $15.02 billion, marking the worst trade balance for the January-July period since 1956.

In July, energy-related products led the surge in imports. Inbound shipments of crude surged by 115.2 percent on-year, liquefied natural gas by 39.8 percent and coal by 29.9 percent.

While prices of other raw materials surged, global inflation in agricultural products such as wheat and corn were found to have contributed to the nation’s trade deficit.

Imports of wheat and corn increased by 29.1 percent and 47.6 percent, respectively. In addition, imports of semiconductors -- core intermediate goods for the nation’s industrial output -- rose by 25 percent.

The situation comes amid fast economic normalization in the global economy from the pandemic as well as the protracted war between Ukraine and Russia.

Despite the trade deficit, exports were still brisk last month. The figure of $60.7 billion marked the highest of any July in history.

Outbound shipments of petroleum products increased by 67.2 percent on-year, vessels by 29.2 percent, automobiles by 25.3 percent and secondary batteries by 11.8 percent.

But exports of computers declined by 27.3 percent, home appliances by 18.7 percent, textiles by 9.6 percent and mobile telecommunications by 3.5 percent.

By destination, shipments of all products to China fell by 2.5 percent amid the economic powerhouse’s lockdowns of major cities. Exports to Japan and South and Central America fell by 1.4 percent and 7.9 percent, respectively.

Korea recorded a deficit for the third consecutive month in trade with China, the nation’s largest trade partner.

Ministry data showed that the share of China in export destinations has continued to fall over the past few years. While it accounted for 26.8 percent of the total outbound shipments of Korea in 2018, its portion fell to 25.3 percent in 2021 and 23.2 percent in the first half of 2022.

Industry Minister Lee Chang-yang said in a statement that the government will unveil comprehensive measures to promote exports in August. He also said that “it is time to conduct risk management surrounding the industry and trade.”