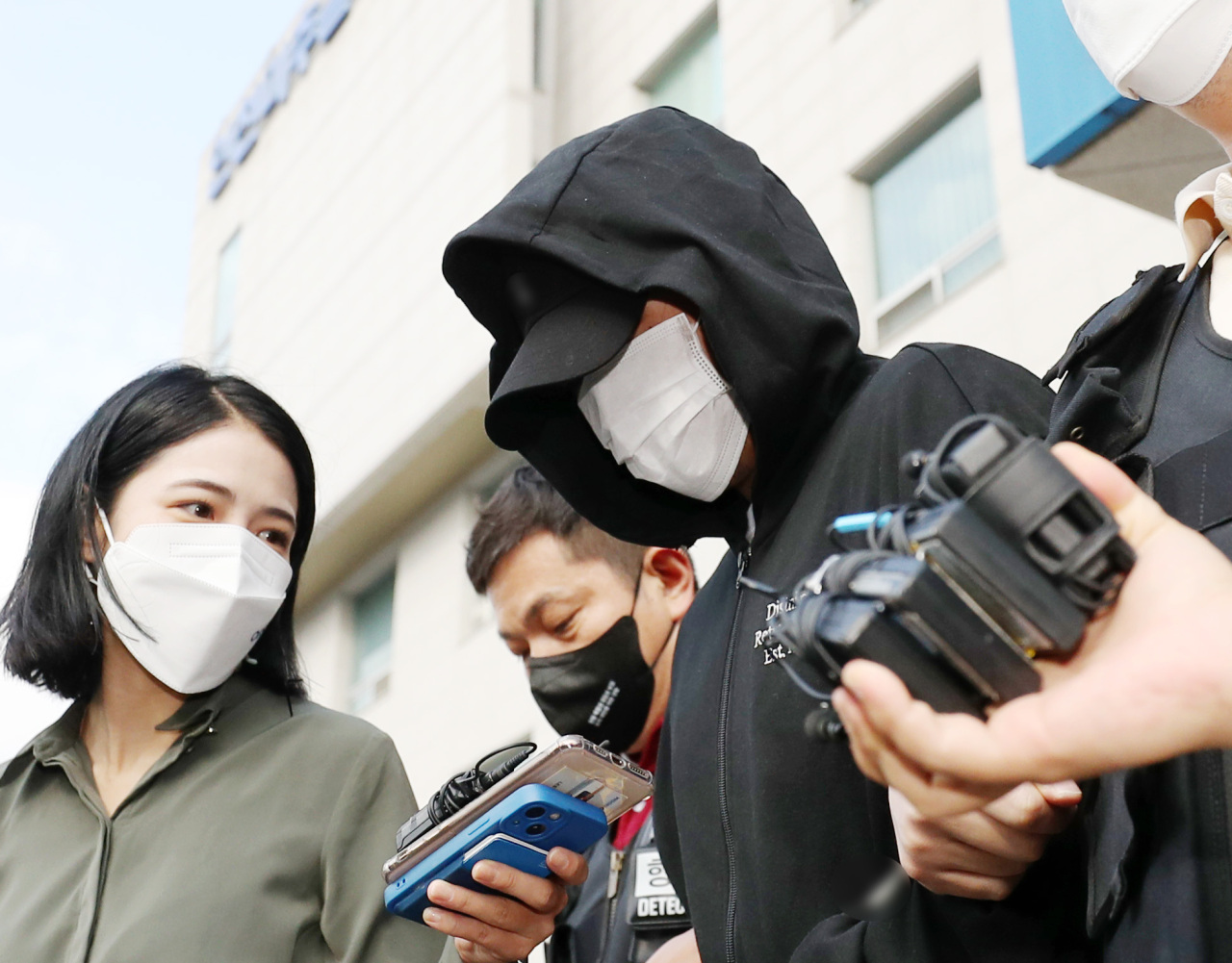 A male student, who is accused of sexually assaulting his schoolmate on the campus of Inha University and causing her to fall from a building to death, leaves the police station in Incheon on July 22. (Yonhap)
On July 17, a freshman at Inha University in Incheon, was formally arrested on charges of raping and causing the death of his schoolmate. Shocked that such a terrible crime took place inside the campus, people demanded that the suspect’s identity be disclosed, but police decided not to reveal it on the grounds that the suspect’s charge does not belong to the six major crimes subject to personal information disclosure.

The decision reignited a decades-long controversy over the disclosure of a criminal suspect’s identity and whether it is more important to protect human rights or honor the public’s right to know.

Experts say whether to mask or unmask suspects has been inconsistent over the years as the law itself is not clear and enforcement of the law is also at times decided by public sentiment. They call for more consistency to prevent public confusion.

A criminal suspect’s face and name were allowed to be disclosed publicly until Dec. 7, 2004, when the suspects of the Miryang gang rape case -- in which 44 male high school students in Miryang, South Gyeongsang Province, raped three middle school girls and two high school girls on multiple occasions for over a year -- were arrested.

Shocked by the brutality of the crime, some people gathered information about the suspects on their own, made a list of possible perpetrators with photos and personal information and distributed it online.

This caused problems because they were only suspects and some had nothing to do with the crime.

This incident brought up the need to protect a suspect’s identity, and the police began to cover suspect‘s faces with masks and hats in front of the press.

At the same time a number of serial murders in the 2000s increased public pressure for identities to be revealed. In 2004, Yoo Young-chul was arrested after causing at least 20 deaths, and two years later Jeong Nam-gyu, who murdered 13 victims, was caught. Their personal information was not disclosed.

Public anger and anxiety rose as the violent crimes continued, and finally it exploded when another infamous serial killer, Kang Ho-soon, was arrested after the murders of 10 women on Jan. 24, 2009. People protested, asking whether the human rights of such felons were worth protecting, and eventually the press, not the police, revealed Kang’s face.

A year later, in 2010, an official system to manage the disclosure of criminal suspects’ identities was established.

But such arguments run against the principle of presumption of innocence. The policy can also function as a modern-day guilt-by-association system. It is only the suspect whose information gets displayed in public, but there is no preventive measure to protect their family members and acquaintances from being harmed.

Most importantly, under the current system, the decision to identify the suspect heavily depends upon external factors.

According to a recent study released by the Police Science Institute, which dealt with the case of 35 suspects whose personal information was disclosed from 2010 to the first half of 2021, decisions whether suspect’s identity to be disclosed or not had a valid relationship with the public sentiments.

The disclosure of the suspect’s personal information occurs an average of 4.96 days after the incident. During the period, between the cases that suspects’ information was unveiled and the cases that was not, there was a significant difference in the number of comments on online news articles.

However, not all violent crimes that received public attention disclosed the suspect’s identity. The subjective judgment of the police committee that determines whether it is appropriate to disclose the suspect’s identity -- comprised of three internal officials and four outside experts -- is a significant factor.

On May 2016, a man was caught after stabbing a woman to death in a public bathroom near Gangnam Station. The police did not disclose his personal information, considering the fact that he suffered from schizophrenia. Two years later, in October 2018, Kim Seong-su, 29, was arrested after stabbing a man to death at an internet cafe in western Seoul. Although his crime was similar to the 2016 Gangnam station murder case and he suffered from depression, Kim’s face and information were disclosed.

First thing we need is “consistency”

The law should be predictable. It should be clear and understandable. Experts mainly pointed to two urgent and ambiguous areas that need to be revised: Unclear expressions used in articles and arbitrary standard police committee.

Both articles mention that the suspect needs to meet four criteria to have their identity disclosed: “The crime shall be a specific violent crime which has been committed in a cruel way and has brought material damage; sufficient evidence shall exist to prove that the criminal suspect has committed the crime; disclosure shall be required for the public good only; and the suspect shall not be a juvenile.” 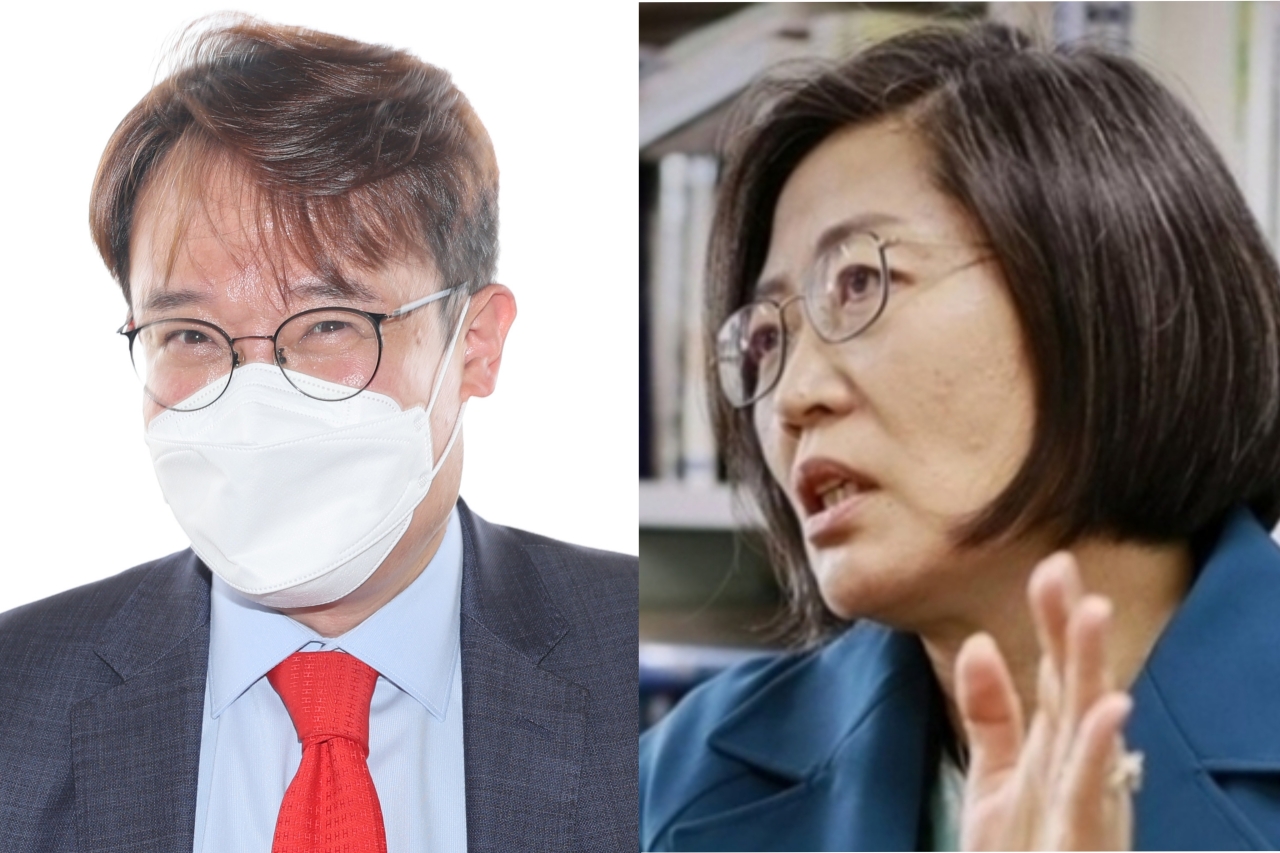 “The law needs to define things more clearly. Only when the scope of ‘crime which has been committed in a cruel way’ is properly determined will the judgment not be swung by the arbitrary standards of the police committee,” she said.

Seung Jae-hyun, a researcher at the Korean Institute of Criminology and Justice, focused on the problem of the police committee, saying that “the fact that decisions made by the committees are inconsistent is a problem, but it is also a big problem that whether to hold a committee or not is inconsistent.”

He points out that the police’s inconsistent attitude was also seen in the Inha University case. There was no police committee for this case because the suspect was charged with quasi-rape resulting in death, not murder, which means he did not meet the requirements for disclosure of personal information. However, the police chose not to open the police committee even before the charges were decided by the prosecution.

To make things fair, suspects must be unmasked without exceptions if he or she meets the conditions specified by the law, Seung explained. “However, in its current state, it is impossible to predict whether the police committee will be convened or not, because the decision is solely made by each police agency,” he added.