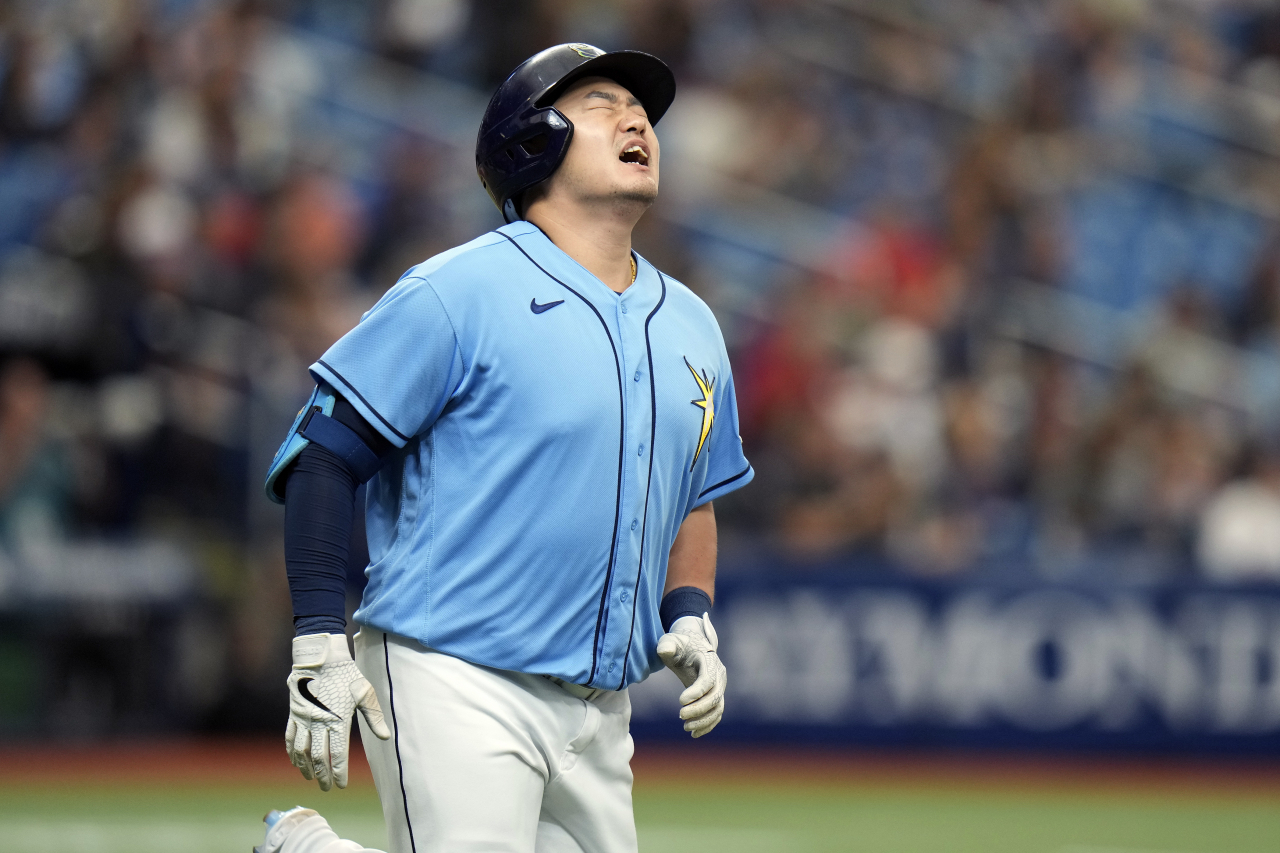 In this Associated Press photo, Choi Ji-man of the Tampa Bay Rays reacts after hitting a sacrifice fly against the Cleveland Guardians during the bottom of the fourth inning of a Major League Baseball regular season game at Tropicana Field in St. Petersburg, Florida, on Sunday. (AP)

Amid rumors that he could be dealt ahead of the annual trade deadline this week, Tampa Bay Rays infielder Choi Ji-man has surpassed his RBI total from last season.

Choi collected two RBIs despite going hitless in four at-bats in a 5-3 loss to the Cleveland Guardians at Tropicana Field in St. Petersburg, Florida, on Sunday (local time).

Choi was the designated hitter and got his second straight start at the leadoff spot. After striking out in the first inning, Choi knocked in a run with a groundout in the second inning.

Then with the bases loaded at one out in the bottom of the fourth, Choi came through with a sacrifice fly that knotted the score at 3-3.

The Guardians scored twice in the fifth, though, en route to their two-run victory.

Choi flied out to right field in the seventh and popped out to third base in the ninth.

A report out of Houston over the weekend claimed that the Rays and the Houston Astros had discussed a trade involving Choi and Astros right-hander Jose Urquidy.

The Astros, leading the American League (AL) West by 12 games at 67-36, are looking for an upgrade at first base as Yuli Gurriel, the reigning batting champion, has been struggling at the plate. He is batting only .243 this year after winning the batting title with a .319 average last season.

The Rays, clinging to the last AL Wild Card spot at 54-48, appear to be an ideal trading partner, as they have no shortage of options at first base. Aside from Choi, Yandy Diaz, Isaac Parades and Harold Ramirez have all played that position and put up strong offensive numbers.

The Astros have a surplus of starting pitchers, and Urquidy, at 9-4 with a 3.86 ERA, is seen as an expendable piece. The 27-year-old won't be a free agent until after the 2025 season.

Choi is 31 years old and will become a free agent after the 2023 season. He has been best known for his on-base skills and strong defense at first base, highlighted by acrobatic splits to dig out low throws.

While being platooned against left-handed starters, Choi has bounced back nicely this year. He is batting .257/.355/.415, with his batting average and on-base percentage slightly better than his career marks.

Choi ranks second on the team in RBIs, one behind Randy Arozarena, who has played in 23 more games than Choi. The South Korean also ranks second with 40 walks and third with eight home runs.