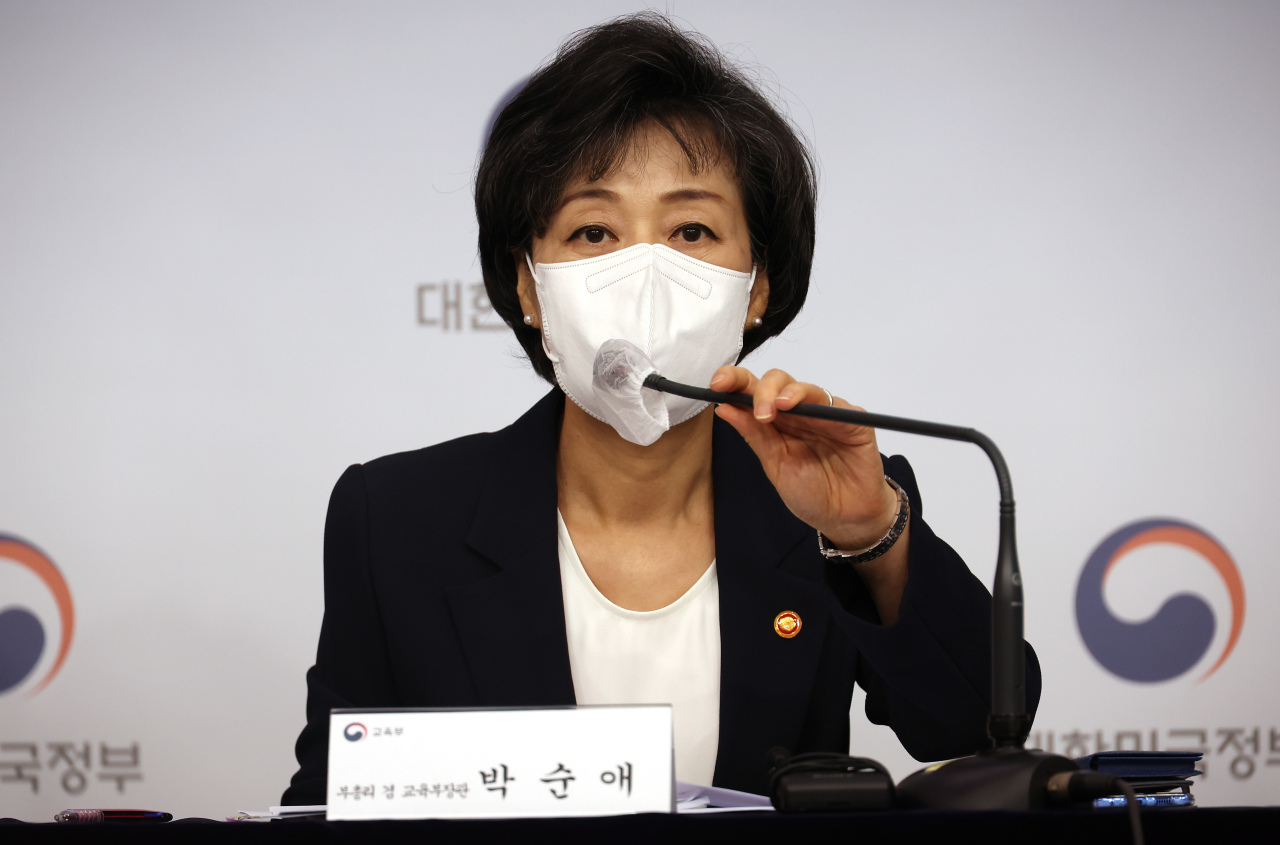 Education Minister Park Soon-ae speaks at a press briefing held Friday at the governmental complex in central Seoul, before reporting to the president. (Yonhap)
The Ministry of Education proposed a reform of the school system to send children to elementary school 1 year earlier.

The Education Ministry got the green light to work on a reform of the current school system that would lower the age of entry to elementary school by one year on Friday afternoon.

Education Minister Park Soon-ae directly briefed President Yoon Suk-yeol on the ministry’s agenda at the presidential office in Yongsan-gu, central Seoul, to which Yoon ordered Park to push for the reform “immediately,” according to his spokesperson Kang In-sun.

In Korea, children attend elementary school from March 1 of the year following the year in which they reach six years of age, counted according to the international age system. The Education Ministry’s public proposal would lower school entry age by one year to five years old.

“The state should provide education to all children at the right time,” Park said at a press briefing held before she reported to the president.

In September, the ministry will launch a survey on 20,000 students and their parents, asking whether they agree with the reform of the school years or not.

“That is why I insisted on reporting to the president today. We are on a tight schedule,” Park said, explaining the rushed presentation of the report to the president. The ministry’s Friday briefing was canceled last minute the day before, but was held as scheduled in the end.

Park hopes that children can enter schools under the new system in 2025. Some schools and districts could pilot the early entry program starting in 2024.

Along with lowering the school entry age, the ministry will push for an integration of kindergartens and care centers, an often-discussed topic touched upon by past administrations.

In Korea, newborns to those aged 5 can attend care centers which fall under the supervision of local governments and the Ministry of Health and Welfare, while those aged 3 to 5 can go to kindergartens supervised by local education offices under the Education Ministry.

Though children aged 3 to 5 may attend different institutions, either care centers or kindergartens, they are all cared for under the Nuri Program, a state-led education curriculum.

Past governments have tried to integrate the two institutions to provide a more systemized education and care for children, yet however, have failed.

“I would not have brought up the topic if there had not been mutual grounds for understanding between related parties,” Park said, hinting that the Education Ministry has reached a certain level of agreement with the Health Ministry.

“The state has the responsibility to provide an education of quality at the right time to everyone,” she said.

In August, the Education Ministry will announce a roadmap for nurturing talent fit for the digital era.

Nurturing talent for the Fourth Industrial Revolution is one of the major agendas of the Yoon administration, including a drive for the semiconductor industry.

Earlier this month, the Education Ministry announced its roadmap to nurture 150,000 people with expertise in the chip industry within the next 10 years, including lifting university student quota restrictions.

To support skilled workers for new tech markets, the Education Ministry will hold regular meetings with President Yoon presiding as the chair.