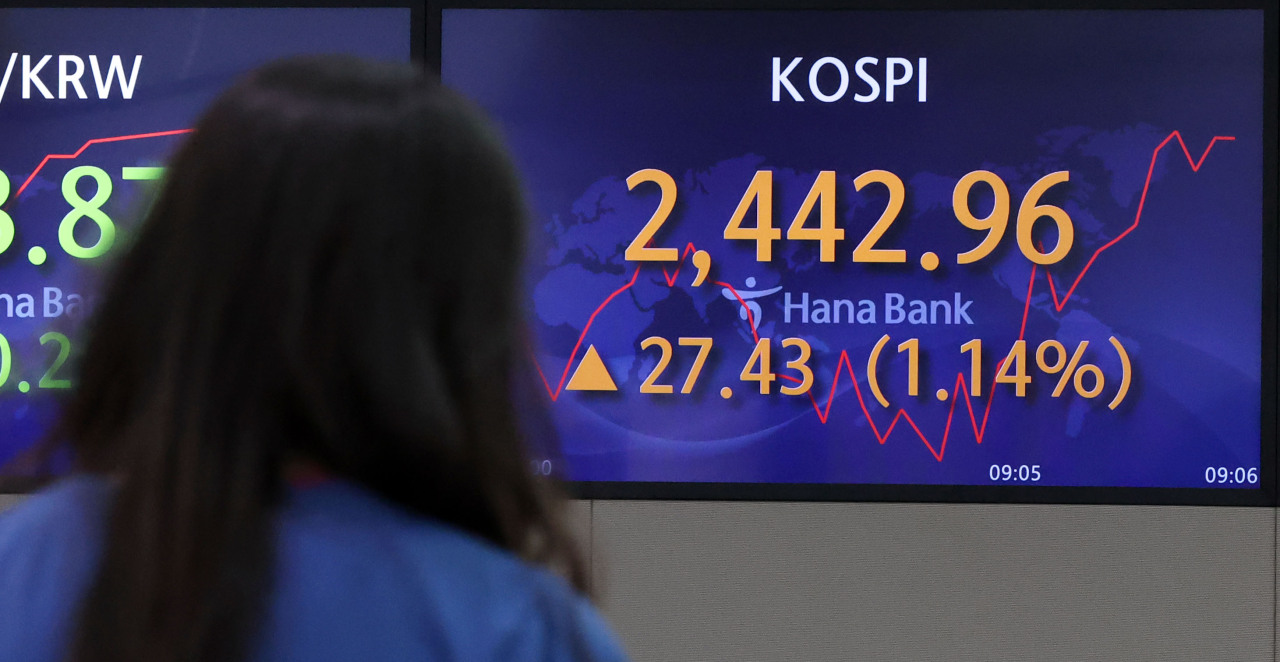 An electronic board at the dealing room of Hana Bank headquarters shows a gain of the Kospi on Thursday. (Yonhap)
SEJONG -- The nation’s top economic policymaker on Thursday downplayed the possibility of an active capital flight among foreign investors, saying that the US Federal Reserve’s latest rate hike, which now stands higher than South Korea’s, was carried out within the market expectation.

“The US Fed’s decision generally accords with market expectations,” said Deputy Prime Minister and Finance Minister Choo Kyung-ho, adding the international financial markets absorbed the outcome without any particular shock in the morning.

“While (some) are expressing concerns over (en masse) capital outflow of overseas investment, foreign investment in Korean stock market maintained a net influx in the past when the US rate exceeded Korea’s rate on three separate occasions,” he said.

Choo’s optimistic view came at a meeting held to look into major market indices, hours after US Fed‘s drastic rate hike by 75 basis points to 2.25-2.5 percent per annum. This surpasses the benchmark rate of 2.25 percent in Korea, which has been set since July 13.

He highlighted the robust fundamentals of the Korean economy and sufficient foreign currency reserves, suggesting that these would be the core factors preventing a capital flight.

But the minister said the government would closely monitor the situation to weed out any possible risks by mapping out contingency plans by segment.

The local foreign exchange and capital markets gained later in the day after the news from Washington, D.C.

At the meeting, the minister and Bank of Korea Gov. Rhee Chang-yong shared the view that “the impacts on the local markets would be restricted.”

The benchmark Kospi climbed by 19.74 points from a trading session earlier to close at 2,435.27 on Thursday.

The price of the Korean currency gained sharply to close at 1,296.1 won per US dollar, compared to 1,313.3 won a session earlier. The greenback fell below the 1,300 won mark for the first time since 1,299.8 won posted on July 7 in terms of closing price.

Stabilization of the local indexes could partly be attributable to Fed Chair Jerome Powell’s remarks that another unusually large increase “could be appropriate” at the next meeting for rate-setting. However, he said any decision would depend on economic data.

Nonetheless, the US decision is drawing wide attention as the Fed conducted hikes by 150 basis points in just two months, compared to 0.75-1 percent in May.

This marked the biggest rate hikes in more than four decades since it conducted hikes of 300 and 200 basis points, respectively, in November and December 1980.

Market insiders, including some analysts in the brokerage sector, predict that the Bank of Korea would have no choice but to raise the base rate to the late 2 percent or 3 percent by the end of 2022.

They say the reversal between Korean and US rates and the ongoing high inflation would be the main factors for the coming monetary tightening among local policymakers.

Opinions are seemingly divided over a possible big step of conducting rate hikes by 50 basis points of the BOK.

Hyundai Research Institute researcher Joo Won was quoted by a news provider, as saying, “It would be difficult to push for a big step in August. As worries over a sagging economy have become bigger than the inflationary pressure in Korea, (I don’t believe that) Korea will follow the pace of hikes in the US.”

A research fellow of the Korea Institute of Finance said that “the Fed cannot but extend the range of rate hikes if the global (consumer and raw materials) prices further climb.”

He predicted, in that scenario, that the BOK could possibly raise the rate more actively.